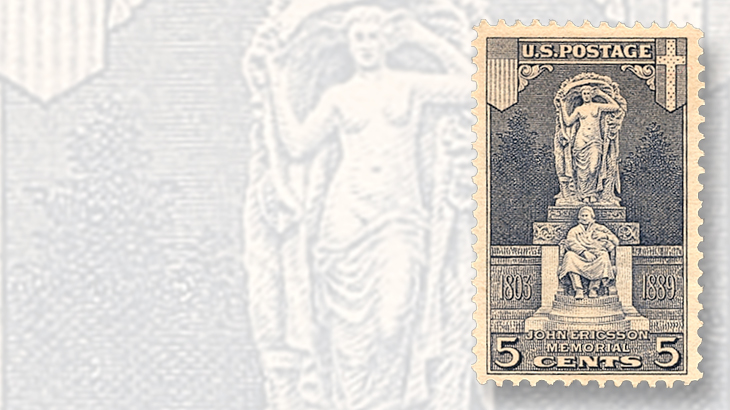 The 5¢ stamp commemorating the John Ericsson Memorial (Scott 628) depicts the statue of the Swedish-born mechanical engineer and inventor that is located near the National Mall in Washington, D.C.

The stamp, designed by Clair Aubrey Huston, was issued May 29, 1926, the very day that the statue was dedicated by President Calvin Coolidge and Crown Prince Gustaf Adolf of Sweden.

The statue and the stamp honor Ericsson, who was born July 31, 1803, in the Langban region of Varmland, Sweden.

While living and working in England, Ericsson perfected the screw propeller. He moved to the United States in 1839 and designed a screw-propelled warship for the U.S. Navy in association with Capt. Robert Stockton. Ericsson became a U.S. citizen in 1848.

Ericsson’s fame in the United States stems from his designing the USS Monitor for the Union forces during the American Civil War. The ironclad ship with rotating turret successfully engaged the Confederate ironclad CSS Virginia (formerly the Merrimac) on March 9, 1862, in the Battle of Hampton Roads.

The Navy and the American Civil War: A remembrance found on stamps