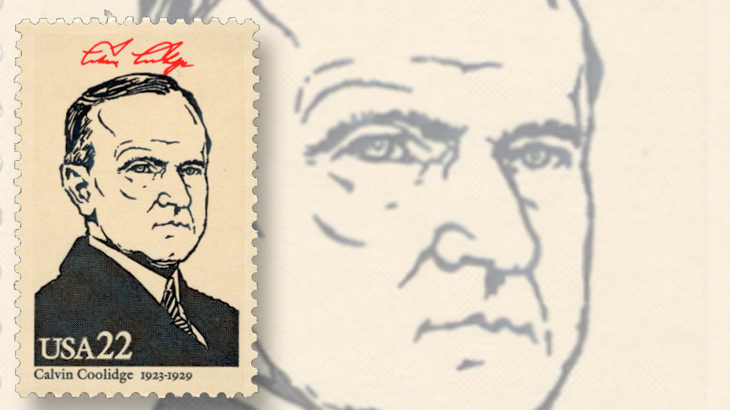 United States President Calvin Coolidge has been featured on two stamps, including this 22¢ stamp from the 1986 Presidential commemorative set.

The 30th president of the United States was born John Calvin Coolidge Jr., on July 4, 1872, in Plymouth Notch, Vt.

He was named for his father, but was called Cal or Calvin within his family, and he used his middle name throughout his life.

Coolidge served out the remainder of Harding’s term, and was nominated as the Republican Party’s candidate for president in 1924. He won the election and was sworn in again on March 4, 1925.

He was known as a man of few words who rarely smiled, but his sense of humor was still apparent. One anecdote reports that a woman seated next to Coolidge at a dinner party told him she had a bet that she could make him say more than two words. His reply was, “You lose.”

Coolidge served during a period of economic affluence known as the Roaring Twenties. Many have attributed his policies of limited government regulation of business for this prosperity, while others suggest that his policies also led to the stock market crash in October 1929, just months after the Coolidge presidency ended, and the Great Depression that followed.

More than half a century later, he was shown on a 22¢ stamp in the 1986 Ameripex Presidential commemorative set (Scott 2219b).