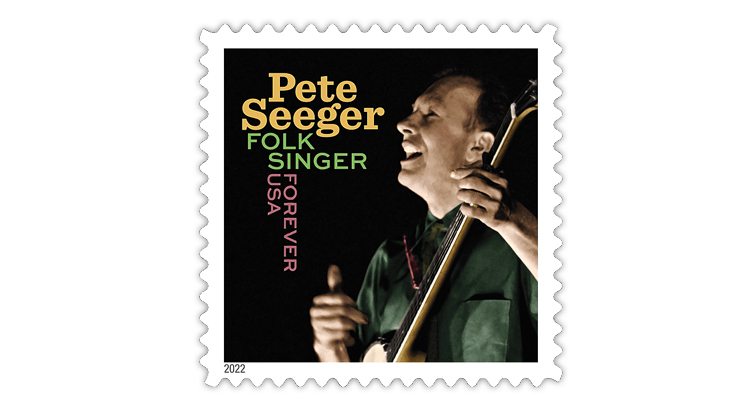 On July 21, the United States Pete Seeger forever stamp will debut at the “For Pete’s Sake” concert at the Jane Pickens Theater in Newport, R.I.

In a June 22 press release, the United States Postal Service announced that the first-day-of-issue ceremony for the July 21 Pete Seeger forever stamp will take place in Newport, R.I., at the beginning of a concert honoring the folk singer.

The ceremony and concert will be held Thursday, July 21, at the Jane Pickens Theater, 49 Touro St., in Newport, R.I. The ceremony begins at 8 p.m. with music to follow. The concert, sponsored by Newport Folk, is called “For Pete’s Sake.”

Attendees must be at least 21 years old to attend the ceremony and concert. There are limited tickets available, and those interested in attending can respond online.

The U.S. Postal Service said that Seeger addressed social issues by using the power of voices joined in song. He wrote original songs such as If I Had a Hammer and Turn! Turn! Turn!, and he also covered traditional songs. The USPS said his adaptation of We Shall Overcome became a civil rights anthem.

“During his long career,” the USPS said, “the charismatic and idealistic performer became a folk hero to generations.”

The Pete Seeger forever stamp is being issued as part of the Postal Service’s Music Icon series. The photograph used in the stamp design was taken by Seeger’s son, Dan Seeger, who will be in attendance with other family members at the stamp ceremony.

Tom Foti, product solutions vice president at the U.S. Postal Service, will serve as dedicating official at the ceremony.