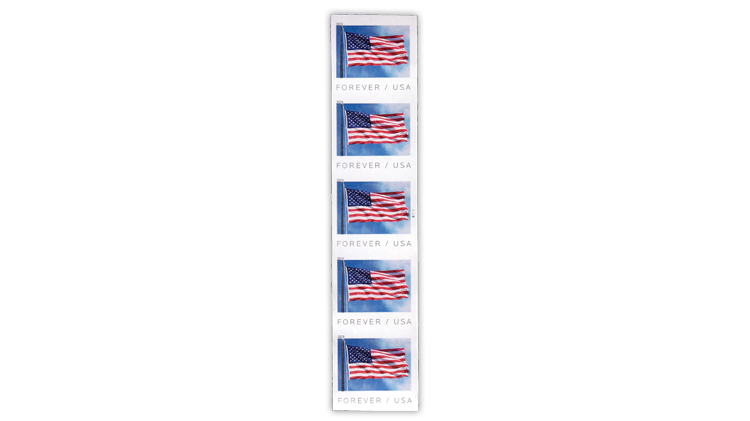 This plate-number strip of five United States 2019 nondenominated (55¢) Flag coil stamps shows no trace of serpentine die cutting between the stamps. The new imperforate error was discovered in late January at a post office in Illinois.

An imperforate error of the United States nondenominated (55¢) Flag coil stamp printed by Banknote Corporation of America (Scott 5343) was discovered in late January by an Illinois collector in a small post office.

The discovery, made almost a year to the date after the Flag coil was issued Jan. 27, 2019, came when an irate customer returned the defective roll of stamps, complaining that she was “unable to separate the stamps.”

Thinking quickly, the collector offered to buy the coil roll from the customer and then asked the clerk to see the remaining stock, where one additional roll of 100 Flag coil stamps with the die-cutting omitted was discovered and purchased. An additional roll of error stamps was discovered later, according to the collector, but the post office clerk refused to sell it to him.

Under normal circumstances this BCA-produced Flag coil has horizontal serpentine die cuts measuring about 11 on a standard perforation gauge. With the die cutting omitted, the stamps are similar in appearance to Scott 5342, another 2019 Flag coil stamp of the same design, but produced by Ashton-Potter.

Illustrated here is a plate number strip of five of the newly reported imperforate Flag coil error. The B1111 plate number appears in the right margin of the middle stamp.

Even without a plate number, the two 2019 Flag coil stamps are easily distinguished. The BCA version has its microprinting printed adjacent to the right side of the second red stripe from the bottom of the flag. Microprinting on the Ashton-Potter coil appears near the lower grommet of the flag.

This is the first major error reported on any U.S. stamp so far this year, and one of only three reported on U.S. stamp issues of 2019. The other two were die-cutting omitted errors on the USS Missouri (Scott 5392) and George H.W. Bush (5393) commemorative issues, both also produced by BCA.

Increased advancements in stamp printing technology have greatly reduced both the scope and number of major errors reported on U.S. stamps in recent years.

As a side note, virtually all modern U.S. stamps are now self-adhesive with serpentine die cuts that simulate the shape of stamp perforations. Although the two are technically different, collectors and dealers both use the terms “imperforate” and “die-cutting omitted” interchangeably.

Correspondingly, the Scott Specialized Catalogue of United States Stamps and Covers does the same in its listings.

Linn’s welcomes reports of additional discoveries of these or other major errors on U.S. stamps.