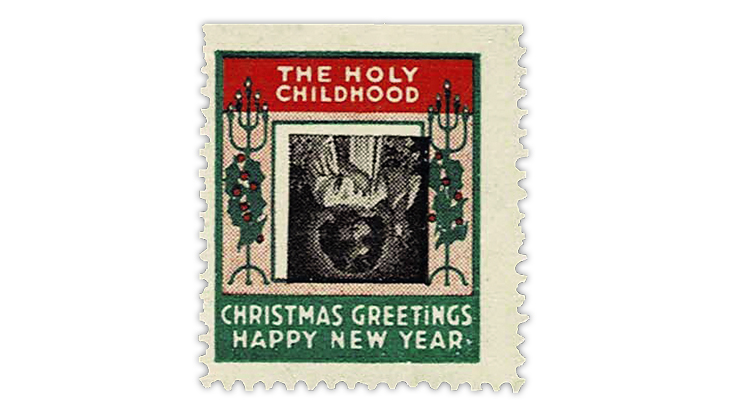 This inverted-center example of the 1931 Pontifical Association of the Holy Childhood Christmas seal was recently identified by a Wisconsin collector. It is the first and only invert known on this 1931 local Christmas seal.

What’s the chance that a collector will find the first example of a major error on a philatelic item 87 years after it was issued? Not high, but this is what happened when the Rev. George Schaetzle of Sheboygan, Wis., was examining a small collection of Christmas seals he had been given in 2018.

His discovery is illustrated here: a Christmas seal with the central illustration inverted.

The central design shows a child with a candle.

The Pontifical Association of the Holy Childhood was founded in France in 1843 by Bishop Charles de Forbin-Janson. It still exists today, and the American branch is now known as the Missionary Childhood Association. It is headquartered in New York City.

The association produced seals as part of its fundraising program from 1915 to 2004. Catholic children sold the seals door-to-door.

The seals were produced in sheets of 25 and 100. They were widely distributed, but printing totals are not known.

This 1931 seal with the center inverted appears to be the sole survivor of this error as no other collector of this material has previously reported it.

If there had been a single invert in each sheet, there should be many more of these in collections, so I believe that a single sheet of inverts was produced.

Questions remain, however. Where has this error seal been all of these years? How many collectors owned it or saw it but failed to notice the error? And what happened to the remainder of the sheet?

Local Christmas seals have a small, but dedicated, collector base that pursues this specialty as part of the Christmas Seal and Charity Stamp Society. There is even a catalog called Mosbaugh’s U.S. All Funds Catalog. The catalog was printed in sections, and the third lists the seals issued by Catholic organizations.

The latest edition of the third section of the catalog was published in 1979, but George Painter is updating the work. When the update is completed, it will be made available to collectors through the Christmas Seal and Charity Stamp Society website.

A normal example of the Pontifical Association of the Holy Childhood Christmas seal catalogs $2. It is difficult to come up with a value for the invert as price is a function of both supply and demand.

Whatever the value ultimately assigned, the lesson is that each stamp in your collection, even a charity stamp, deserves a careful visual check.