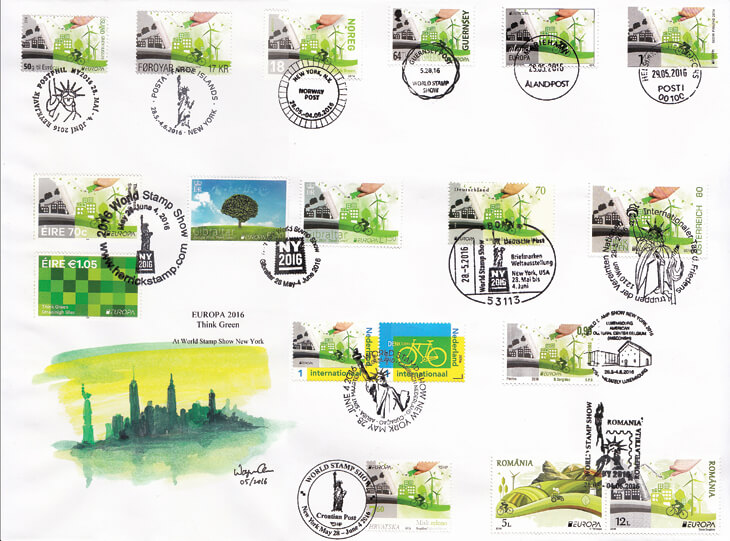 This oversize cover is franked with 2016 Europa stamps, most with the “Think Green” common design, each canceled at the appropriate postal administration booth at World Stamp Show-NY 2016. With the exception of the stamp from Croatia, which was ordered in advance, all of the stamps also were purchased at the show.

Like many fellow collectors, volunteers, and show attendees, I really enjoyed World Stamp Show-NY 2016 May 28-June 4 in New York City.

Instead of writing from a general perspective about the show, I would like to share my experience of creating a special collector’s item at the show.

I have been a longtime collector of joint issues, including common-design stamps issued by multiple countries. I was especially excited about this year’s Europa series with a common design called “Think Green.”

The design, which is intended to create awareness about protecting the environment, was the winning entry from Cyprus Post in a contest organized by PostEurop.

The last time there was a common-design Europa stamp was in 2000, and the one before that was in 1984.

Most of the European postal administrations issued their Think Green stamp or stamps in May, just prior to WSS-NY 2016. My idea was to create a cover bearing these Europa stamps from of as many countries as I could obtain and then haven them canceled at the show.

My intention was not to make a first-day cover, but an exhibition cover with show cancels from participating postal administrations.

I have a similar item in my collection that was made at the 1990 Essen show in Germany, with a then-recent joint issue between Austria, Belgium, Berlin, and East and West Germany commemorating 500 anniversary of European postal services.

I was excited to make a similar item with this year’s Europa stamp issue.

The cover had to be big enough for this overwhelmingly large common-design issue, so I decided to make my own.

I printed the title “EUROPA 2016 Think Green at the World Stamp Show NY” on an oversized (9-inch-by-12-inch) white envelope, and hand painted an image of New York’s skyline using green watercolors. I was happy with the result and signed my original artwork.

Some assured me they would carry the common design stamp for sale. In the case of Croatia, I was informed that due to the proximity of the issue date, the representative would not carry this year’s Europa issue at the show. Nevertheless, I was able to pre-order the stamps and got them in time, thanks to the assistance from Croatian Post’s philatelic services associates.

On the first day of the show, I visited each postal administration’s booth to purchase mint stamps, preferably the common-design stamp. Some were sold at face value, but some were as much as twice the face value due to the added service fees.

I arranged my newly purchased stamps, including the common-design stamp from Croatia, on the prepared envelope according to relative geographical locations and proximity. Then, I had them canceled at each booth.

France (La Poste) was represented at the show, but the Europa issue was not available at the booth, though it was issued just prior to the show.

Other than Ireland, which had a generic show cancel from its representative, Herrick Stamp Co., each postal administration had a special show cancel at its booth.

The postal administrations’ representatives carefully canceled their country’s stamp on my oversized cover, and I received many compliments for the cover design while obtaining these cancellations.

The only Europa 2016 stamps that were available at the show that did not make it on to the large cover were those of Liechtenstein and Jersey. They were only sold as the whole set, instead of common-design stamp only, and the whole set did not fit on my arranged cover.

Also, there were no specific cancellations for those countries. To avoid duplicated cancellations, because I already used the general cancellation for the stamps from Ireland, I decided to leave them out.

This was a fun and rewarding project. While it required a lot of planning and work and money to buy the new issues, I am satisfied with the result.

I made one for a friend in the Netherlands with a similar interest, and an extra one just in case.

When I look back on my WSS-NY 2016 activities, this cover will be cherished as a memorable souvenir.