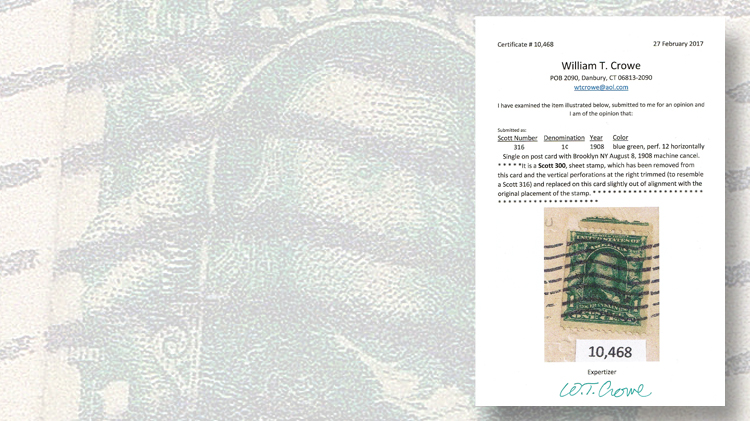 William Crowe’s negative certificate with a large photo of the stamp on the 1908 postcard. 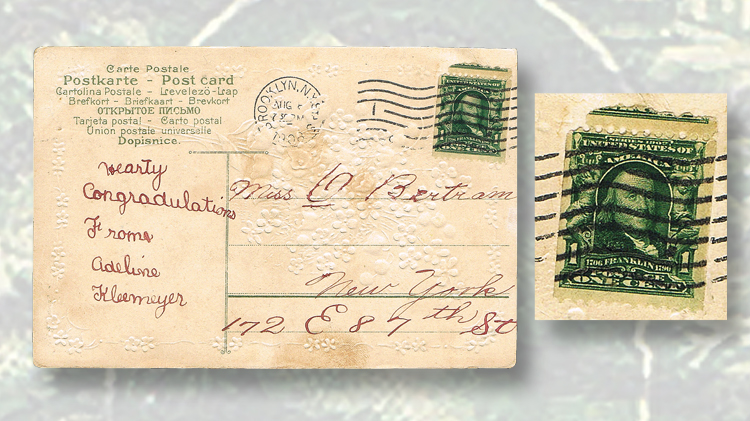 This average-looking postcard canceled in 1908, when the coil versions of this 1¢ Franklin were issued, bears a stamp that the author hoped might be a genuine coil. It isn’t.
Previous
Next

I ought to know better, but once in a while the fever that grips all of us gets me, too. Look at the postcard shown with this column. At first glance it is unremarkable, until you notice that the straight edge on the right of the 1¢ Franklin stamp is matched by a straight edge on the left.

Reference to the Scott Specialized Catalogue of United States Stamps and Covers makes this stamp a presumptive Scott 316, the 1909 perforated 12 horizontal coil. The catalog value is given in italics as $125,000 unused, with no indication that used examples are known.

A catalog note says, “All examples of [Scott] 316-318 must be accompanied by certificates of authenticity issued by recognized expertizing committees.”

Because the stamp on the postcard had wide enough margins to qualify, I hoped it might have a chance at being a used Scott 316. I knew the chances of this being so were low. But I thought: nothing ventured, nothing gained.

So, I sent it to friend William T. Crowe, who at one time was the administrator for the Philatelic Foundation’s expertizing service. He now does expertizing of early U.S. stamps as a lone expertizer, following in the footsteps of the late Bill Weiss (1943-2015), who issued certificates for many years. Not only did I know both of them for a long time, I had confidence in their abilities.

As a practical matter, a lone expertizer does not usually command the same level of respect from auction firms and the highest of high-end collectors as compared to expertizing committees, where multiple experts look at a stamp or cover. But I knew Crowe could tell me if the stamp had a chance at being Scott 316.

Cutting to the chase, here is what his opinion said: “Submitted as Scott Number 316, it is Scott 300, sheet stamp, which has been removed from this card and the vertical perforations at the right trimmed (to resemble a Scott 316) and replaced on this card slightly out of alignment with the original placement of the stamp.”

Reality intrudes on hope once again. A good attitude for the expertizer is summarized by the old adage, “If it’s too good to be real, it probably isn’t!”

In this case, the sheet stamps of this period are actually much harder to find perfectly centered than poorly centered. In addition, adjoining stamps might be of slightly different widths or heights because of the way that the perforation wheels were set. This means that wide margins are often found that can be cut down to resemble imperforate sides.

Thus, making coils from slightly misperforated sheet stamps that already had a single side imperforate is not a difficult challenge.

Over the course of years, I have seen many examples of these ersatz coils that were poorly done and easy to detect (not enough margin, imperf margins not straight, the nib of a perforation showing, etc.), but this time the craftsmanship was better, though still imperfect.

One of the giveaways for the 1¢ Franklin fake was the failure of the stamp doctor to precisely match the progression of the cancellation on the card to the stamp.

A similar example was recently sent by Linn’s reader Rich Pederson of Clemson, S.C. While describing the cover so he could list it on eBay, Pederson noticed that the Sept. 21, 1894, cancellation date predates the recorded October 1894 issuance of the 2¢ Washington Type I stamps of the 1894 issue.

Thinking that unlikely, he took a closer look at the cancellation and saw that the stamp was added after the fact. The cover doctor did a pretty good job of matching, but the killer bars on the stamp are slightly narrower than those on the cover.

In addition, Pederson lifted the bottom corner of the stamp with tongs and saw that the original bars extend beneath the stamp.

So, this falls in the category of what you can do to be your own expertizer. It’s just a matter of training yourself to be observant.

Want to learn more about stamps and covers that seem too good to be true?

John M. Hotchner provides a seasoned insider's look at the world of expertizing in each monthly issue of Linn's Stamp News. If you'd like read more on the subject, subscribing to either the print or digital edition of Linn's is easy and fast.