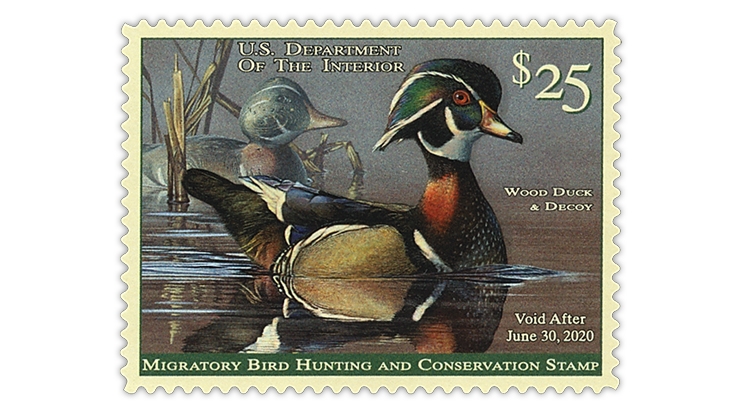 The 2019 federal duck stamp includes a depiction of a wood duck decoy to satisfy a requirement to include a hunting element in the design. That requirement returns for the 2020 art contest that will determine the design of the 2021 stamp.

The United States Fish and Wildlife Service will require the depiction of a hunting element on entries into its 2020 federal duck stamp art contest, according to details briefly posted on the service’s website April 22.

This regulation will be implemented every five years in the future, affecting all entries into the contest during any year that ends with “5” or “0.”

The government agency that oversees the federal duck stamp program initially proposed a permanent rule change requiring stamp artists to include a visual element reflecting the theme “celebrating our waterfowl hunting heritage.” That proposal was filed Jan. 29 in the U.S. government’s Federal Register.

When the public comment period closed March 16, the proposal had elicited 716 comments from individuals and organizations regarding the change. Some individuals commented more than once, and others remarked anonymously.

Of the 716 respondents, about 100 supported the ruling as written, or approximately 14 percent. Some of those opposed identified themselves as hunters who felt the regulation might alienate some of the participating artists and nonhunters who support the federal duck stamp program and conservation efforts financed by sales of the stamps.

A commenter identified as Mark Berger expressed support for the change, writing, “The hunting community has been [a] staunch supporter of sound environmental and wildlife management process through the purchase of these stamps and in many case purchasing more than one stamp when one is only needed.”

Stafford Lehr, chair of the Pacific Flyway Council, opposed the proposed change, stating, “Requiring the inclusion of a waterfowl hunting element in the artwork on [a] permanent basis may stifle artist creativity and complicate the beautiful simplicity of artwork that will eventually be reduced to the size [of] a stamp. … We do not believe this proposal will generate increased Duck Stamp revenue but will likely decrease sales to nonhunters as well as decrease the number of artistic entries submitted to the competition.”

Some commenters suggested that including a hunting element should be optional or implemented only in some years and not in others. The new government rule appears to follow the latter concept.

The federal duck stamp issued in 2019 (Scott RW86) was judged in the 2018 art contest under almost identical criteria, with a theme of “celebrating our waterfowl hunting heritage” announced prior to the contest.

The winning artwork by Scot Storm features a single male wood duck with a wood duck decoy in the background.

The wording of the final ruling is expected to be posted on the Federal Register website around May 1.

The deadline for submitting artwork in the 2020 contest is Aug. 15. The contest is scheduled to take place Sept. 25-26 at Drake University in Des Moines, Iowa.

The annual stamps are listed as “Hunting Permit Stamps” and valued with U.S. revenue stamps in the Scott Specialized Catalogue of United States Stamps and Covers, and in Vol. 1 of the Scott Standard Postage Stamp Catalogue.