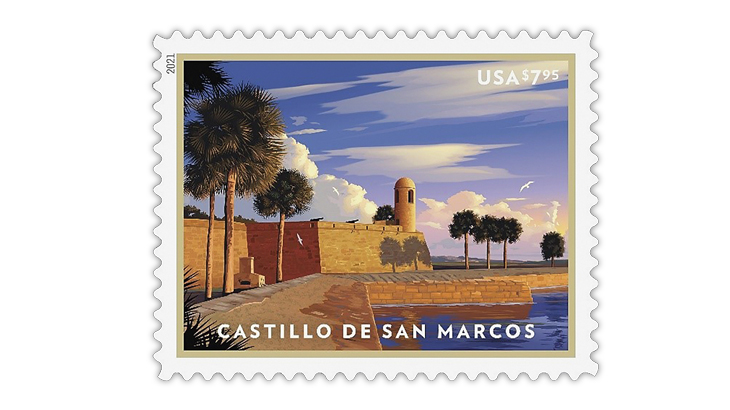 The United States Postal Service will continue its American Landmarks stamp series in 2021 with a new stamp to be issued in January that shows a historic Florida fort.

The $7.95 Castillo de San Marcos stamp will fulfill the new rate for the most commonly used version of the Priority Mail flat-rate envelope. That new rate is expected to go into effect Jan. 24.

The new stamp is the 25th in the American Landmarks series. All of the stamps in the series feature illustrations by Dan Cosgrove.

A stamped envelope with the same design is anticipated but has not been announced by the Postal Service.

“Castillo de San Marcos was for many years the northernmost outpost of Spain’s vast New World empire,” according to the National Park Service’s park brochure. “It is the oldest masonry fort and the best-preserved example of a Spanish colonial fortification in the continental United States.”

The report on the planned Priority Mail price increases appeared in the Dec. 7 issue of Linn’s, page 8.

Because the Priority Mail Express flat-rate envelope rate will remain at $26.35, a new stamp is not planned for that rate. The $26.35 Grand Island Ice Caves stamp (Scott 5430) is expected to remain on sale.

Additional information on the $7.95 Castillo de San Marcos stamp will be published in a future issue of Linn’s.