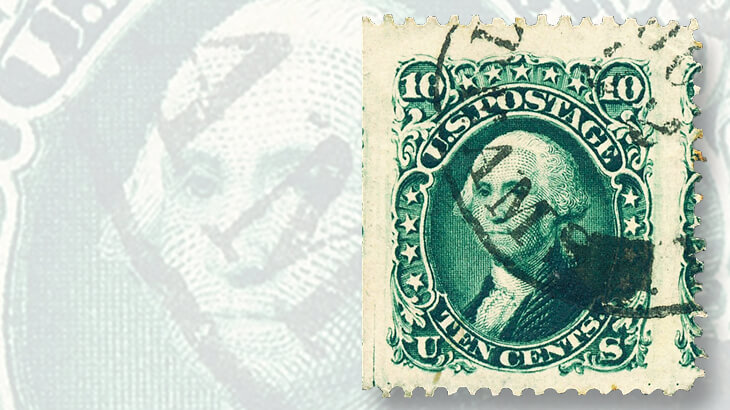 Among the United States offerings in the Christoph Gaertner auction is an unusually large 1861 10¢ Washington stamp canceled with a circular steamship postmark. 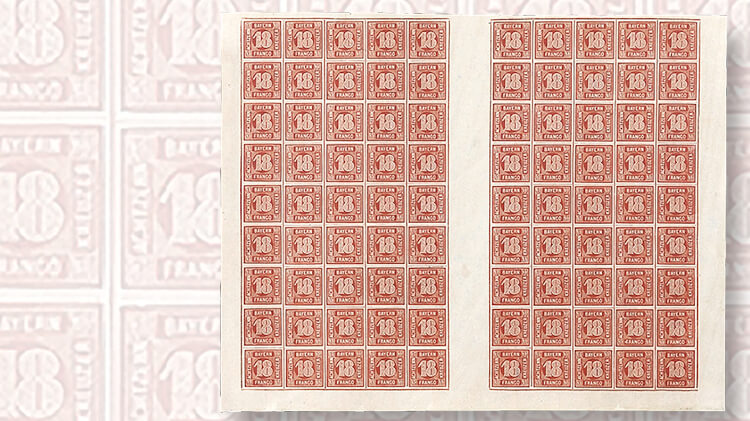 One of 13 full sheets of classic Bavaria stamps to be offered at auction Oct. 11-15 by Christoph Gaertner in Stuttgart, Germany. Several sheets in the lot are unique. 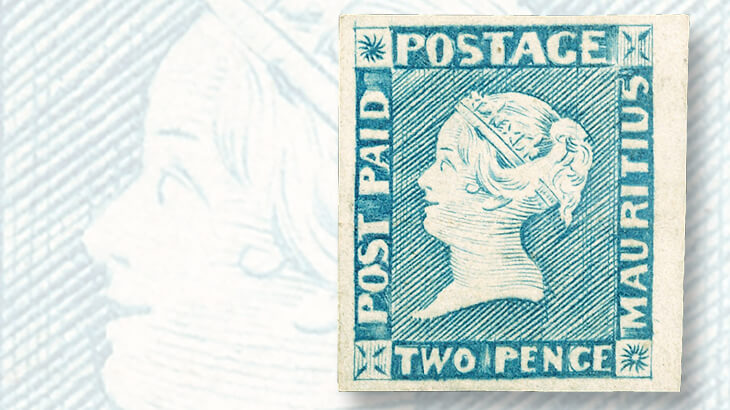 An 1848 Mauritius 2-penny blue on bluish paper, from an early-to-intermediate impression, once part of the Arthur Hind collection. 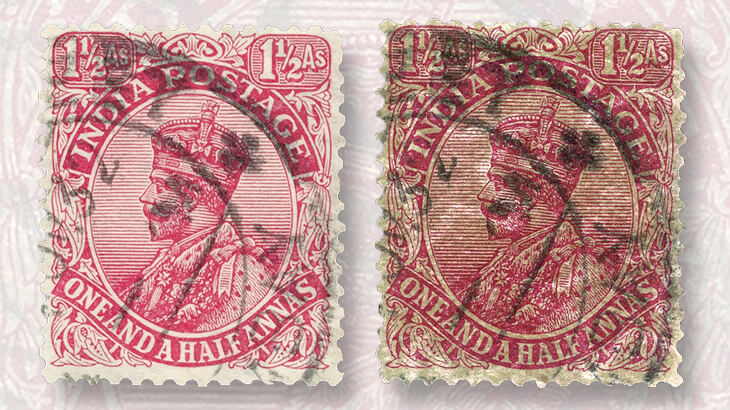 A single used 1929 King George V stamp from India with sideways watermark will be offered at the Gaertner auction. The image on the right is backlit to highlight the rare watermark variety.
Previous
Next

The ever-expanding auction firm of Christoph Gaertner is holding its 35th philatelic sale Oct. 11-15 at its headquarters in Bietigheim-Bissingen, a suburb of Stuttgart, Germany.

This sale will boast 29,000 lots, encompassing the usual mix of worldwide individual stamps, collections, and large lots; postal history; picture postcards; and other philatelic items such as proofs and essays. (Further sections of the sale on Oct. 19-20 will feature banknotes and coins.)

Printed catalogs for the October sale, which can be requested through the website, consist of 12 handsome hardbound volumes that are a joy to peruse. One volume is devoted entirely to Asia, while another features selected worldwide rarities.

It can take some effort to browse the extensive Gaertner online listings. The interface is not the most intuitive, the sheer volume of items can overwhelm a simple search, and though the website is in English, many item descriptions appear only in German. But there are plenty of nuggets to reward persistence, not to mention significant major items.

Among early German states lots is a set of 13 full sheets of Bavaria’s first issues. The southern German kingdom put out its first stamps in 1849, in double-paned sheets of 90 arranged five stamps by nine stamps on either side.

Only one other sheet is known of the 1-kreuzer black (Bavaria Scott 1), and several of the sheets in the lot are unique. Including Scott 1-14 except the first 6k issue (3), the sheets are described as “museum quality” with full margins and original gum. The lot is estimated at nearly $1.4 million.

Among worldwide offerings is a unique variety of India’s 1929 King George V definitive stamp with a sideways watermark.

The single used stamp’s genesis is uncertain. A couple of theories have been advanced, though nothing has been determined conclusively.

The stamp may have been produced when a corner of the sheet was accidentally folded over at exactly a 45-degree angle during printing, although that would have resulted in printing on the gummed side, which does not appear to have been the case.

It is possible that a hole in the unprinted sheet could have been patched with a slip of stamp paper rotated 90 degrees, but that also seems far-fetched. In any case, further investigation is needed.

The stamp, a variety of Scott 109, is accompanied by a 1997 Royal Philatelic Society London certificate stating it is genuine and noting that a block of four resides in the Royal collection belonging to Queen Elizabeth II.

However, an inquiry by Gaertner with Michael Sefi, the official keeper of her majesty’s stamps, confirmed that is not the case. The certificate also misidentifies the stamp as having a single-star watermark.

Other highlights include an unused Mauritius 2-penny blue on bluish paper of 1848, from an early-to-intermediate impression (Scott 6 or 6a). Once part of the famous Arthur Hind collection, it is estimated at $33,500.

Lest one think there are only big-dollar items, most lots actually open at very affordable levels.

Among United States stamps is lot 4388, a jumbo-sized, used example of the 1861 10¢ Washington stamp (Scott 68). Canceled with a circular “Steamship” postmark, it has a minor corner crease and perf stains, but it has to be one of the largest examples of this stamp ever seen. Its opening bid is $112.

Gaertner’s first sale, in 2006, comprised 5,700 lots with results totaling €1.7 million. In the decade since, the company has grown by acquiring other auction firms, while the size of Gaertner’s sales, which happen three or four times a year, has also mushroomed.

Gaertner was one of the featured auctioneers at last spring’s World Stamp Show in New York. Between the May 30 sale there and another in Germany on June 10-17, Gaertner offered some 31,000 lots. The catalog for those sales ran to 15 volumes, with a total result of more than €12 million ($13.4 million).

The new auction commences at 9 a.m. (Central European Time) each day. Bidders should read the terms and conditions before bidding.

Gaertner adds a 22 percent buyer’s premium to all lots, as well as a E2 handling charge per item and a 3 percent fee for credit card payments.