Guatemala airmail set may be undervalued 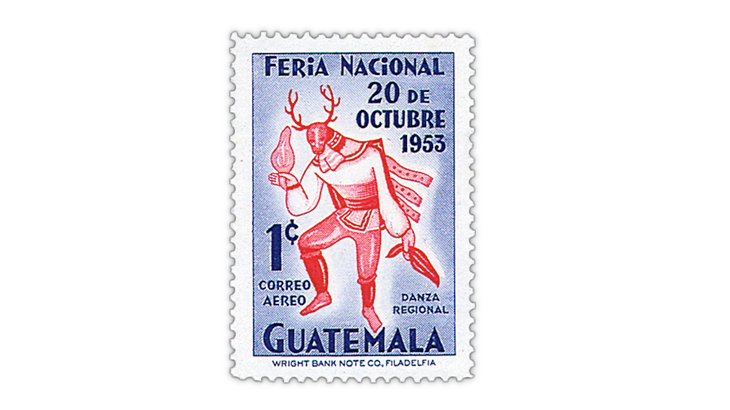 The market for the stamps from most Latin American countries remains strong and steady.

The Central American nation of Guatemala has a strong following of collectors in the United States, and its classic stamps are popular with world classic collectors. Later stamps offer many colorful topical subjects, usually germane to Guatemala.

For fans of provisional stamps (issued for temporary use to meet postal demands until new or regular stocks of stamps could be obtained), Guatemala offers a plethora of opportunities, many with minor number varieties and errors.

Even though the Scott editors do their best to make the catalogs reflect retail values, dealers know that the stamps of most countries sell for a percentage of catalog value. Stamps of Guatemala, for example, usually sell for between 50 percent and 80 percent of Scott catalog values.

On Dec. 18, 1953, Guatemala issued a set of nine airmail stamps commemorating the National Fair held Oct. 20, 1953 (Scott C188-C196). The stamp designs feature a regional dance costume, horse racing, a white nun (the national flower), an allegory of the fair, the Mayan ruins at Zakuleu, symbols of agriculture, a champion bull, bicycle racing, and a quetzal (the national bird).

The Scott Standard Postage Stamp Catalogue values the set at $34.40 in mint, never-hinged condition. Recently, a set sold after spirited bidding in an online auction for $51, or roughly 48 percent more than catalog value.

This set isn’t offered often enough for us to judge if the set is truly undervalued or if this was just an example of overexcited bidders. Regardless, it’s a safe bet that this set is a good buy at full Scott catalog value.