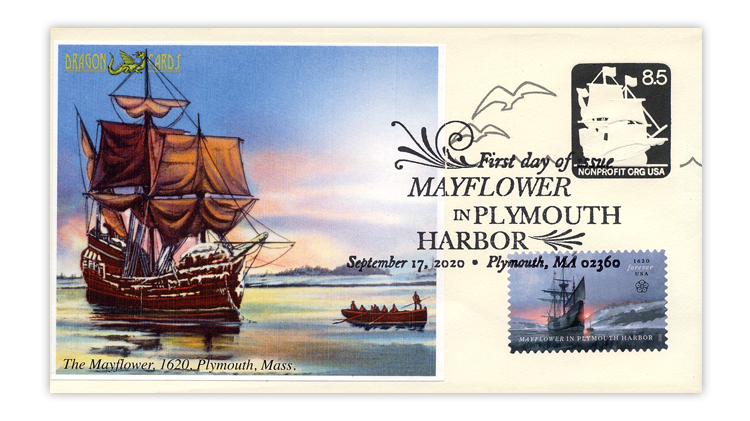 In First-Day Covers in the Jan. 24 issue of Linn’s Stamp News, Lloyd de Vries considers some of the possibilities for combination FDCs using 2022 U.S. stamps. Shown is a combo FDC for the 2020 Mayflower stamp.

The Jan. 24 issue of Linn’s Stamp News just landed on the presses and goes in the mail to subscribers Monday, Jan. 10. And if you subscribe to Linn’s digital edition, you’re at the head of the line with early access Saturday, Jan. 8. While you wait for your issue to arrive in your mailbox, enjoy these three quick glimpses of exclusive content available only to subscribers.

Creating combination first-day covers requires advance planning. To help you get started, First-Day Covers columnist Lloyd de Vries explores some intriguing possibilities for combo covers using United States stamps issued in 2022. “If you begin looking for stamps for combo FDCs now, you may find them in dealers’ face-value boxes at shows. Closer to the issue date of the new stamp, the older stamps may be harder to find or more expensive,” de Vries explains. He provides additional suggestions such as using postal stationery and taking an earlier FDC and adding the new stamp and its first-day postmark. Be sure to read the entire column for even more ideas. You’ll come away inspired to make your own combination FDCs.

In Exploring Astrophilately, Charles J. Vukotich Jr. focuses on covers that celebrate the achievements of private launch companies. “Much has been written about SpaceX, Blue Origin, Virgin Galactic and some other famous companies. This column will attempt to trace the history of private space activity, focusing on history and some lesser-known companies,” Vukotich writes. He leads off with a U.S. Postal Service return receipt documenting the first private rocket test from Matagorda Island, Texas, on Aug. 5, 1981. Vukotich created three of the four cacheted flight covers discussed in the column, one of which commemorates the first successful launch of a UP Aerospace Spaceloft rocket from Spaceport America in New Mexico. Vukotich’s recollections of the events honored on these covers make for an engaging read.

Bill McAllister, Linn’s Washington correspondent, pays tribute to former USPS stamp executive W.L. “Pete” Davidson who died Nov. 20, 2021, at the age of 79. As McAllister explains, Davidson was instrumental in the creation of the Postal Service’s most popular stamp: the 1993 29¢ Elvis Presley commemorative. McAllister also writes that “Davidson also helped inspire the block of four 1990 25¢ Classic Films stamps (Scott 2445-2448) and managed the Postal Service’s sponsorship of the 1992 Winter Olympics in Albertville, France.” Davidson began his career with the USPS in 1968. He departed in 1992 after his job was eliminated in a downsizing of the Postal Service’s staff in Washington, D.C., that started in 1992. Davidson’s next move had an interesting connection to the Elvis stamp. Read the entire obituary to get the details.