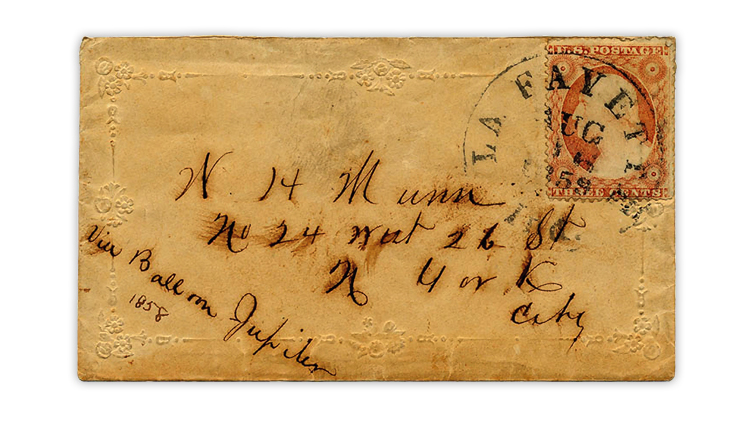 In the Nov. 21 issue of Linn’s Stamp News, Spotlight on Philately columnist Ken Lawrence provides a detailed examination of the world’s first airmail that was carried aboard the balloon Jupiter in 1859.

The 100-page Nov. 21 issue of Linn’s Stamp News just landed on the presses and goes in the mail to subscribers Monday, Nov. 7. And if you subscribe to Linn’s digital edition, you’re at the head of the line with early access Saturday, Nov. 5. While you wait for your issue to arrive in your mailbox, enjoy these three quick glimpses of exclusive content available only to subscribers.

The balloon ‘Jupiter’ mail flight of 1859

“To the best of anyone’s current knowledge, aeronaut John Wise flew the first airmail dispatched from a post office and sent through the mail on Aug. 17, 1859, when he ascended in his balloon Jupiter at Lafayette, Ind.,” writes Ken Lawrence in Spotlight on Philately. “Later that day, he landed near Crawfordsville about 40 miles away and deposited the mail at that post office for onward transport and delivery.” Lawrence goes on to give the most detailed account of Wise’s historic flight by quoting extensively from contemporaneous newspaper articles. It’s a story worthy of its subject because only one letter and cover from Wise’s historic 1859 airmail flight are known to survive.

Stamps on fire: the smell, volcanic ash and burnt edges

Wayne Chen, in an engaging feature article, takes readers on a tour of stamps produced with features related to fire. He first looks at scented stamps that are fire inspired. Earlier this year, for example, Switzerland issued a stamp printed with a coating that smells like a campfire. The scent is appropriate because the stamp was issued to celebrate the Swiss Guide and Scout Movement National Jamboree. Chen highlights a Brazilian 1999 Fire Prevention souvenir sheet of four that smells like burnt wood. As you might guess, volcanoes figure into Chen’s narrative. To make the point, he illustrates a trio of 2010 stamps from Iceland that were printed with ash from the Eyjafjallajokull volcano that erupted in 2010. He concludes with a look at stamps with creative die cutting that resembles burnt edges.

Errrors and varieties on stamps of Queen Victoria

Collectors of errors, freaks and varieties, also called EFOs, will want to spend time reading Matthew Healey’s Great Britain Philately column about various Queen Victoria stamps that didn’t turn out as planned after they were printed. Healey narrows the scope of his discussion in this month’s column to Queen Victoria errors and varieties that are listed in catalogs. Freaks and oddities are “for another time,” he writes. He identifies five areas of exploration: design errors (specifically, errors in corner lettering), varieties that occur on individual stamps (plate varieties or flaws), watermark errors and inverts. Whether you’re a seasoned collector of early British errors or a newcomer, you’ll want to keep Healey’s column close at hand.