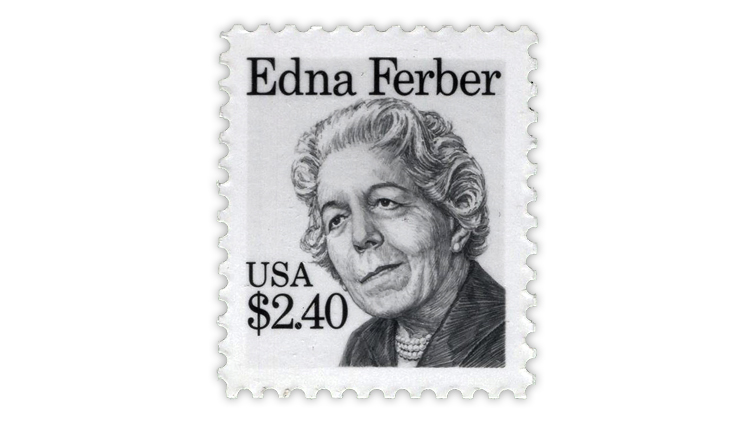 The Feb. 21 monthly issue of Linn’s Stamp News just landed on the presses and goes in the mail to subscribers Monday, Feb. 7. And if you subscribe to Linn’s digital edition, you’re at the head of the line with early access Saturday, Feb. 5. While you wait for your issue to arrive in your mailbox, enjoy these three quick glimpses of exclusive content available only to subscribers.

In his must-read Philatelic Backstory column, former U.S. Postal Service stamp executive Joe Brockert begins in dramatic fashion: “The first United States stamp for the Priority Mail rate was very nearly a Great Americans series stamp in 1986 featuring Edna Ferber. Most of those details have never been shared before.” In 2002 Ferber was finally pictured on an 83¢ stamp in the Distinguished Americans series. Much took place during those 16 years, and Brockert’s engaging review is sure to entertain and inform.

“The year 2022 is one of the great anniversaries of the Danish royal house. On Jan. 14, 2022, Queen Margrethe II celebrated her golden jubilee, the 50th anniversary as a reigning Danish monarch,” writes Armagan Ozdinc. When she was born in 1940, only males could reign as Denmark’s monarch. That changed when the Act of Succession became law in 1953. Ozdinc focuses on the souvenir sheets designed by master engraver Martin Mörck to mark this historic milestone. The sheets were issued by Denmark, Faroe Islands and Greenland. Ozdinc provides a fascinating profile of Mörck and his disciplined, methodical approach to stamp design and engraving. “Mörck is the artist who illustrated and engraved Queen Margrethe II on the postage stamps issued in the Kingdom of Denmark the most,” he explains. This feature about an esteemed engraver and the queen he admires is not to be missed.

In its Nov. 30, 1959, issue, Life magazine illustrated almost 300 stamps in full color. As Christer Brunström explains, “This had previously been impossible as United States legislation prohibited publishers from printing stamps in color. To comply with these regulations, all stamps were depicted with a discreet corner cancel.” Life called the stamps “the handsomest of today’s postal art” and emphasized they were inexpensive. You will be pleased to know that most of these stamps are affordable today, with one significant exception. Brunström reveals this exception and has much more to share about the magazine’s colorful tribute to stamps in this illuminating feature. Be sure to read it in full.

Inside Linn’s: Stamps tell the story of the Polish post office in Danzig