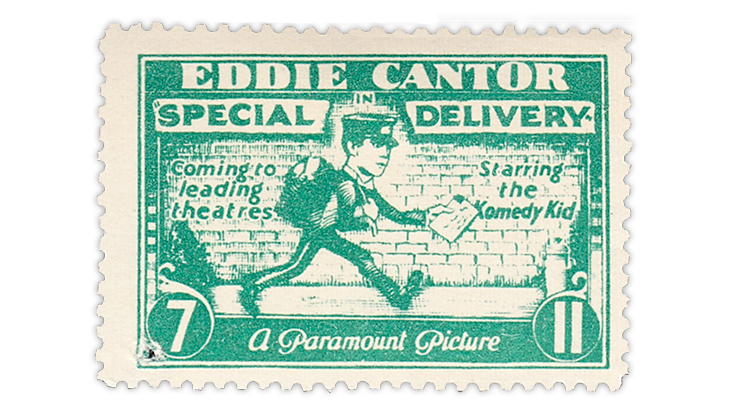 In The Odd Lot in the Aug. 10 issue of Linn’s Stamp News, Wayne Youngblood explores the similarities between a cinderella for the 1927 movie Special Delivery and a then-current U.S. special delivery stamp.

The Aug. 10 issue of Linn’s Stamp News just landed on the presses and goes in the mail to subscribers Monday, July 27. And if you subscribe to Linn’s digital edition, you’re at the head of the line with early access Saturday, July 25. While you wait for your issue to arrive in your mailbox, enjoy these three brief reviews of exclusive content available only to subscribers.

Wayne Youngblood opens his The Odd Lot column by noting that “precious few movies have spawned their own promotional cinderellas that are collectibles themselves. One of these movies is a little-known Eddie Cantor film from 1927 titled Special Delivery.” He then reveals the two types of the stamplike label that was produced as a promotional gimmick for what turned out to be Cantor’s last silent movie. The differences between two types are rather subtle, so be certain to pay attention to the accompanying illustrations and Youngblood’s methodical explanation.

In Modern U.S. Mail, Tony Wawrukiewicz takes readers on a guided tour of various postal documents and online resources to explain how shortpaid letters were handled in the late 19th century. He highlights one important source, the 1874 to 1953 Postal Guide publications, which the United States Postal Service lent to the American Philatelic Research library; the library scanned the entire holding, which is now available to researchers. Other notable research tools are highlighted in the column. Be sure to read it in its entirely and bookmark the listed websites for future use.

In each weekly issue of Linn’s, either E. Rawolik VI or E. Rawolik VII dissects the contents of a stamp mixture offered to collectors. E. Rawolik is a pseudonym that is also the word “kiloware” (a stamp mixture) spelled backward. This week, E. Rawolik VII sifts through a two-thirds sample from assortment of stamps, which yielded stamps from just two countries: Guernsey and Norway. Rawolik found this “surprising” because “usually a mixture will include stamps from a dozen countries or more.” Guernsey issued the oldest stamp in the sample in 1971. It pictures Queen Elizabeth II, Castle Cornet and one other English monarch who reigned from 1042-66. You’ll have to read the column to learn who it is.