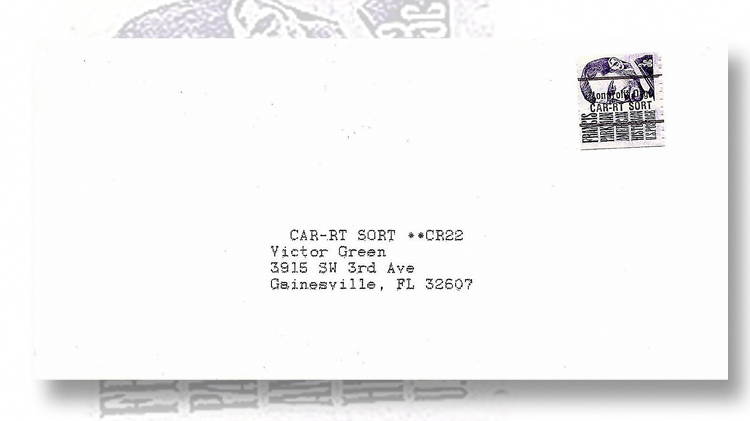 This is a remarkable correct franking with the 3¢ Francis Parkman stamp, meeting the minimum-per-piece carrier-route-presort rate of 3¢ in effect from April 23, 1980, to July 5, 1980. 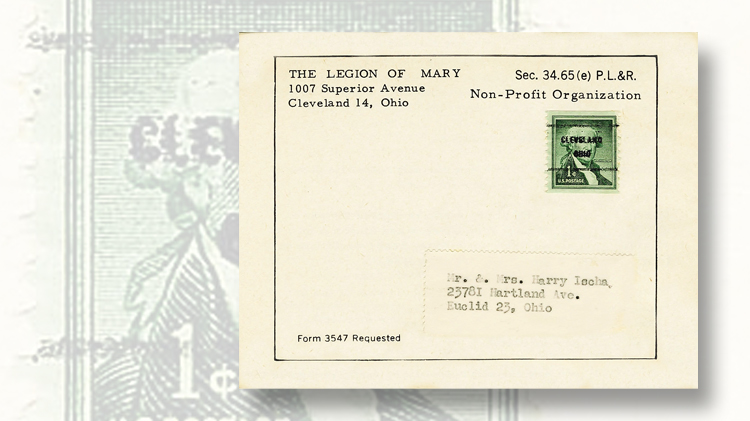 This undated nonprofit mailpiece is an example from the first 1¢ bulk discount nonprofit-rate period, franked at the 1¢ per up-to-1.6 ounces minimum-per-piece rate. It is franked with the 1954 Liberty series 1¢ Washington stamp.
Previous
Next

I am embarrassed to say that these rates are discussed extensively in the Beecher-Wawrukiewicz book, United States Domestic Postal Rates, 1872-1993, but that the index does not allow this information to be easily located.

Recently, Roger Brody, who has a superb exhibit of the Great Americans series, which is the 1965 through the early 1980s definitive series, asked me to explain the second cover shown here.

This circa 1980s nonprofit third-class cover was mailed at the carrier route presort rate, franked with the 3¢ Francis Parkman Great Americans series stamp.

First, though, what is nonprofit mail?

A new bulk/quantity-discount rate category, labeled "special," was established July 1, 1952, for authorized nonprofit organizations. Initially, it was required that the printed or handstamped phrase "Sec. 34.65(e), PL&R" be placed in the upper-right part of the envelope.

Until March 21, 1981, the nonprofit category of discounted mail required payment of the same minimum bulk rate per piece (at first 1¢, then up to 1.25¢ as of July 1, 1960), such that any piece weighing less than a stated weight had to be charged at this rate, while any objects of greater weight were charged at the pound rate.

There was also a bulk mailing fee required for each calendar year.

These rates are found in Chapter 29 (see especially Table 29-1) of the Beecher-Wawrukiewicz domestic rate book.

The first cover shown, from the Wade Saadi collection, is an example from the first 1¢ bulk discount nonprofit-rate period. This undated nonprofit item is franked at the 1¢ per up-to-1.6 ounces minimum-per-piece rate (with the 1954 Liberty series 1¢ Washington stamp, Scott 1031b).

Note the mixing of the handstamped phrases "Sec. 34.65(e), PL&R" and "Non-Profit Organization."

April 23, 1980, marked the establishment of the first two of a series of new discount or reduced rate services for nonprofit bulk mailings — the basic presort and the carrier route presort — each requiring a different level of presorting.

These and many other discount categories are described in the sections of Chapter 28 (titled "Classes of bulk/quantity-discount, regular, third-class mail and Standard Mail") of the Beecher-Wawrukiewicz domestic rate book.

The rates, of course, are not the same, and, as mentioned previously, the appropriate tables for nonprofit items are found in Chapter 29 of the book.

Table 29.1 indicates that the minimum-per-piece carrier-route rate of 3¢ on the undated second cover corresponds to the date range April 23, 1980, to July 5, 1980. Therefore, it was correctly paid with a 3¢ Francis Parkman Great Americans stamp (Scott 1281).

This is a remarkable correct use for this stamp. Such a use might be considered late for a Great Americans stamp, but historically, most definitive series show similar late uses because stamps remained unsold in post office workers' drawers.

In particular, the use on the second cover is an exceptional one that is not often seen.