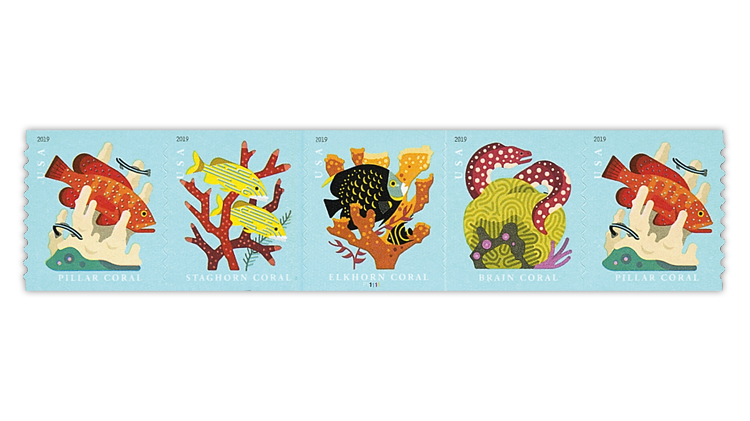 A dealer in northern Michigan discovered a color-omitted error of the United States 2019 postcard-rate Coral Reefs coil stamps while organizing his stock in late January. As shown on this plate number strip of five, the word “POSTCARD” is missing from the

A plate number strip of five of the error is illustrated here.

The omitted color is Pantone Matching System 2234C aqua, which was used to print the word “POSTCARD” that reads up the left side of each stamp. Five other colors were used to print the Coral Reefs coil stamps: cyan, magenta, yellow, black and PMS 635C seafoam.

In December 2020 dealer Dave Testa asked the postmaster at his small local post office to order two rolls of 100 of the Coral Reefs coil stamps.

“After acquiring the rolls, I separated them into [plate number coil strips] and se-tenant strips and put them in my stock book,” Testa told Linn’s. He didn’t notice anything wrong with the stamps at that time.

In late January Testa was updating and reorganizing his inventory when he noticed that the “POSTCARD” inscription was missing from some of the stamps.

He then carefully examined the Elkhorn Coral stamps bearing the plate number in the bottom margin and saw that the last “1” of the plate number appeared to be missing. This digit corresponds to the color used to print the “POSTCARD” inscription.

A quick look in his 2020 Scott Specialized Catalogue of United States Stamps and Covers revealed no error listings for either the Coral Reefs coil stamps or their sheet counterparts (Scott 5363-5366).

Testa immediately contacted Linn’s and arranged to send a plate number strip of five of the possible color-missing error for close examination. He said he didn’t recall reading anything about the error in Linn’s and was “very anxious to have another set of eyes on these stamps.”

Bigalke also confirmed that the plate number stamp in the middle of the strip was missing the last “1.” Normally printed Coral Reefs coil stamps show a plate number consisting of the letter “P” followed by six single digits on every 32nd stamp.

Based on Bigalke’s findings, the new color-omitted error will be listed in the 2022 edition of the Scott U.S. Specialized catalog to be published in October.

According to Testa only one of the two rolls of Coral Reefs coil stamps that he purchased had the color-omitted error.

"I have 91 of the [error] roll of 100 in my possession,” Testa said. “Not having noticed the error originally, I would have used the other nine as postage.”

Testa said all nine error stamps were used to send orders to his customers, all of whom are philatelists.

“I will sell some of the balance [of the errors], but I really haven’t made any decisions,” he said.

It is possible more examples of this error are lurking in post office stocks or at Stamp Fulfillment Services in Kansas City, Mo. But they will be increasingly difficult to locate as the Coral Reefs stamps are phased out in favor of the nondenominated (36¢) postcard-rate Barns stamps issued Jan. 24.

Testa asked his postmaster to obtain some more Coral Reefs coil stamps, but no additional errors were found.

“They were perfect, as you’d expect,” he said.

Testa told Linn’s he was most pleased with his discovery. “It is pretty cool,” he said. “I got pretty excited when I figured out what I had.

“I don’t think the reality has set in. I’ve read (in Linn’s) over the years of people discovering errors, but it is not something you think will ever happen to you personally.”