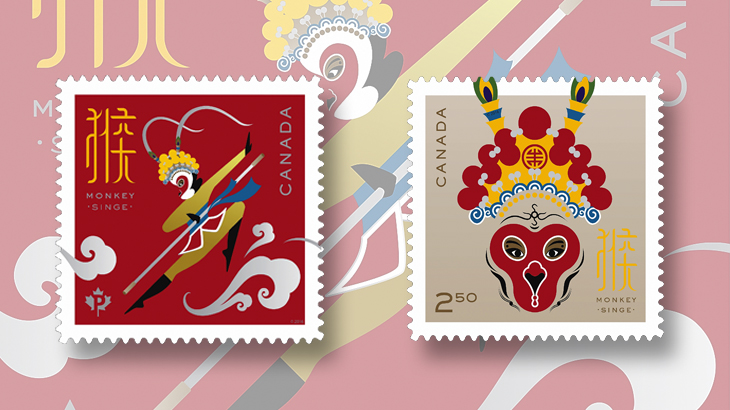 Canada’s 2016 “P” (85¢) domestic-rate and $2.50 international-rate Year of the Monkey stamps show stylized images inspired by the legend of the Monkey King, one of the main characters in the classic Chinese novel Journey to the West. First days for the tw

On Jan. 6, Canada Post unveiled two striking stamp designs to celebrate the Year of the Monkey, which begins Feb. 8.

The 2016 Year of the Monkey issue has two separate release dates: Jan. 11 for the permanent domestic letter-rate stamp (85¢), and Feb. 1 for the $2.50 international-rate stamp.

The delayed issue date of the $2.50 stamp was a consequence of the Dec. 16 announcement by Canada’s new Liberal government abruptly canceling a long-planned increase in domestic and foreign postage rates pending a review of Canada Post policies.

The designs of the “P” domestic-rate and $2.50 international-rate stamps were inspired by the legend of the Monkey King, also known as Sun Wu Kong, one of the main characters in the classic Chinese novel Journey to the West.

Also transformed into a famous Chinese opera, the story tells of how the simian sovereign accompanied the monk Xuanzang on his long journey to India to retrieve sacred Buddhist texts known as sutras.

Designed by Albert Ng and Linna Xu, the “P” stamp image resembles a stylized version of depictions of the Monkey King from the popular Chinese opera.

Canada Post describes the Monkey King in the stamp design as “a golden figure that is vibrant and alive against a rich red background that provides a stark and striking contrast.”

The $2.50 stamp features a stylized Monkey King mask with red and gold accents.

People born in the Year of the Monkey are said to be brilliant, flexible and inventive, and to possess an excellent memory and strong determination to succeed. They can, however, be easily frustrated by delays, may tend to look down on others, and have quick tempers.

Canada Post pointed out that Canadians that have been born during the Year of the Monkey include singer Cline Dion, actress Kim Cattrall, and pianist Glenn Gould.

Popular Chinese New Year’s greetings appear in the selvage of the pane of 25 and also are included on Canada Post’s first-day cover for this stamp.

The $2.50 international-rate stamp will be issued Feb. 1 in a six-stamp booklet and in a single-stamp souvenir sheet that includes foil and embossing.

Also to be offered will be what Canada Post is calling a transitional souvenir sheet that includes both the international-rate Year of the Ram and the Year of the Monkey stamps, along with foil and embossing.