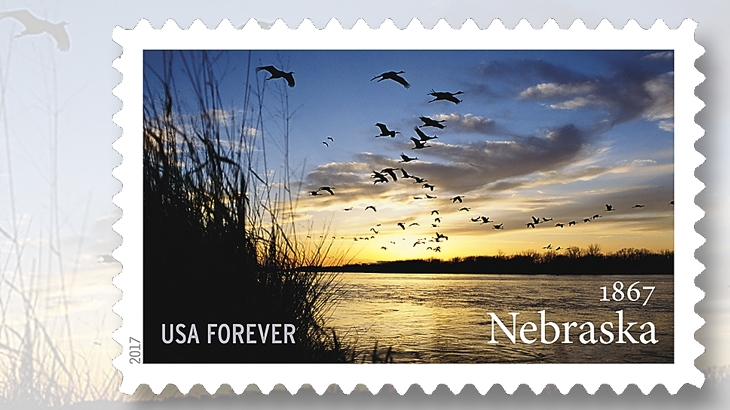 A new forever stamp commemorating 150 years of Nebraska statehood will be issued March 1 with a ceremony at the state capitol in Lincoln. 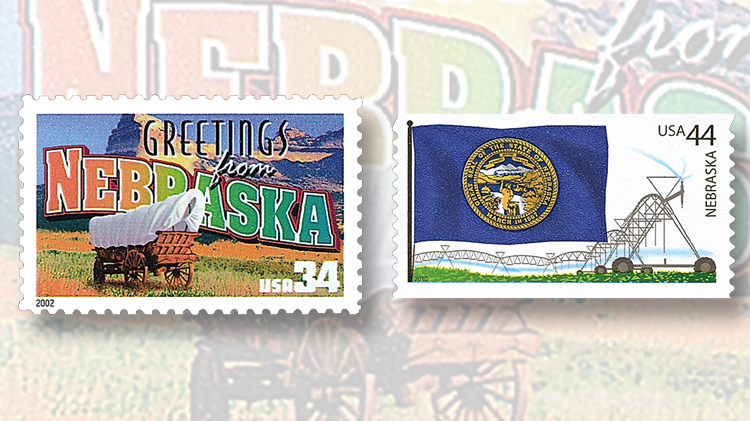 Nebraska is celebrating 150 years of statehood this year, and the United States Postal Service is issuing a nondenominated (49¢) forever stamp to mark the occasion.

The Nebraska Statehood forever stamp will be issued March 1, with a first-day ceremony at the Nebraska state capitol rotunda, 1445 K St., in Lincoln.

The ceremony is scheduled to begin at 9:30 a.m., and is open to the public.

The event kicks off a day of statehood activities in the state capital, including an official Statehood Day ceremony at 2 p.m.

The photograph used for the Nebraska Statehood stamp design shows sandhill cranes flying low to scout for shelter from nighttime predators, according to the Postal Service: “Nebraska photographer Michael Forsberg set up among prairie grasses on the riverbank between the small cities of Grand Island and Kearney to capture the image shown on the stamp.”

The photograph was taken near the Platte River “around the year 2000,” the USPS said.

The stamp was designed by USPS art director Derry Noyes and offset-printed by Ashton Potter of Williamsville, N.Y.

It will be issued in panes of 20, and collectors will be able to purchase die-cut press sheets consisting of six unsevered panes (120 stamps) for the face value of $58.80.

The quantity of press sheets produced was not disclosed by the Postal Service.

The state of Nebraska is celebrating its sesquicentennial throughout 2017.

“Our 150th birthday presents a unique opportunity in time to honor our heritage, celebrate our growth and plan for our future,” the website Nebraska Statehood 150 reports. “We will commemorate this historic occasion and celebrate the great State of Nebraska and its diverse history and cultures by engaging, educating and inspiring our citizenry and leaving a legacy for future generations.”

The region known today as Nebraska was long home to native Indian tribes including the Pawnee, Missouri, Omaha, Oto, and Ponca. Explorers from Spain entered the region in the 16th century, but French explorer Robert de la Salle claimed the Mississippi River basin area, including the Nebraska region, for France in 1682.

Nebraska became part of the United States with the 1803 Louisiana Purchase, and the 1854 Kansas-Nebraska Act created the Nebraska Territory.

A 3¢ violet stamp issued May 7, 1954, commemorated the 100th anniversary of the establishment of the Nebraska Territory (Scott 1060).

On March 1, 1867, Nebraska became the country’s 37th state. The population grew as settlers from the east claimed land and established farms.

A 5¢ stamp marking the 100th anniversary of Nebraska statehood was issued July 29, 1967, with a design showing a Hereford steer and an ear of corn (Scott 1328)

Additional stamps honoring Nebraska include the 13¢ Nebraska Flag stamp as part of the American Bicentennial issue of 1976 (Scott 1669), and the 20¢ Western Meadowlark and Goldenrod stamp issued in 1982 as part of the State Birds and Flowers issue (1979 and 1979A).

A covered wagon was featured on the 34¢ and 37¢ Greetings from Nebraska stamps issued in 2002 (Scott 3587 and 3722), and the Nebraska flag was depicted with a central-pivot irrigation system critical to agriculture on a 44¢ coil stamp issued in 2010.

Technical details and first-day cancel ordering information for the new Nebraska Statehood forever stamp can be found in the box on this page.

Standard ordering instructions apply. Collectors requesting first-day cancels are encouraged to purchase their own stamps and affix them to envelopes. The first-day cover envelopes should be addressed for return (a removable label may be used), and mailed in a larger envelope addressed to FDOI — Nebraska Statehood Stamp, USPS Stamp Fulfillment Services, 8300 NE Underground Drive, Suite 300, Kansas City, MO 64144-9900.

Requests for first-day cancels must be postmarked by May 1.

The Postal Service’s uncacheted first-day cover for the Nebraska Statehood stamp is USPS item No. 474416 at 93¢. USPS item numbers for stamps and FDCs also appear in Linn’s 2017 U.S. Stamp Program.

When to expect the latest Fruit definitive stamp