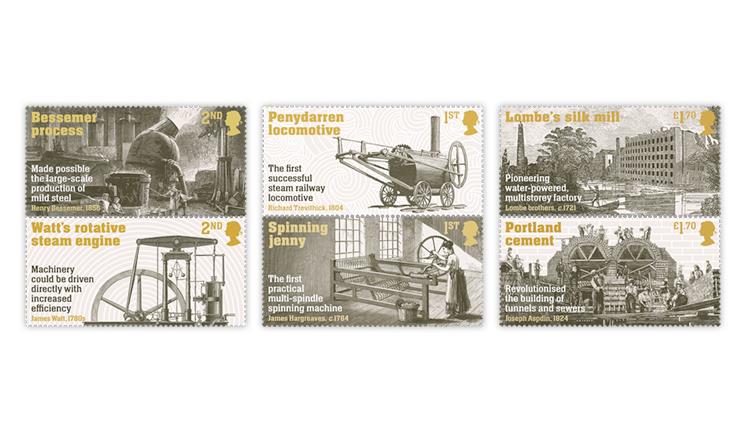 Landmark achievements in the industrial revolution are being honored on six stamps that Great Britain’s Royal Mail is issuing Aug. 12 in three se-tenant pairs. Featured on the stamps are the Bessemer process, Watt’s rotative steam engine, Penydarren locom 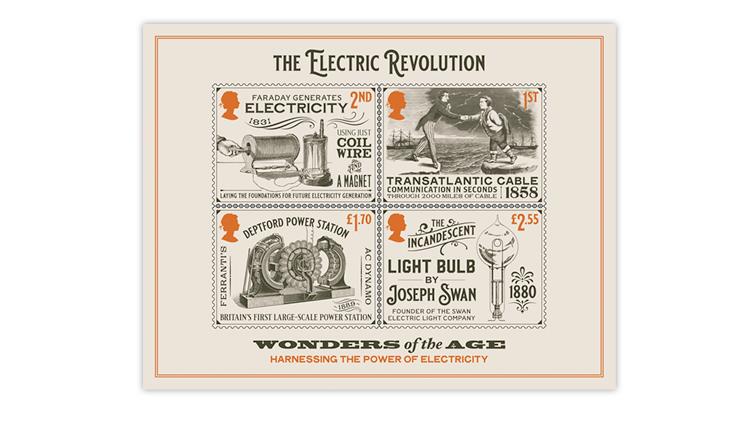 The souvenir sheet of four in Great Britain’s Industrial Revolutions set showcases advances in the electrical revolution, such as the laying of the first trans-Atlantic cable in 1858, that brought significant changes in communication to people’s lives.
Previous
Next

A set of 10 new stamps from Great Britain’s Royal Mail pays tribute to important developments and advancements of the industrial and electrical revolutions.

Royal Mail is issuing its Industrial Revolutions stamps Aug. 12 in three se-tenant (side-by-side) pairs featuring highlights of the industrial revolution and a souvenir sheet of four stamps honoring milestones of the electrical revolution.

The six stamps in se-tenant pairs name the development being honored in the top left corner, with a brief description and the name of the inventor at lower left.

The first of the two nondenominated (66 pence) second-class stamps honors the Bessemer process, which enabled production of steel on a large scale. The process is named for its inventor, Henry Bessemer (1813-98).

Bessemer “discovered that blowing air through molten iron produced a violent exothermic reaction, and that the resultant metal, subsequently called mild steel, had most of the properties of wrought iron and could be produced on a large scale,” according to Royal Mail.

Bessemer patented his method of producing steel in 1856. It was used extensively until the 1980s.

The rotative steam engine developed by James Watt (1736-1819) is featured on the other second-class stamp.

Watt partnered with Matthew Boulton (1728-1809) of the Soho Manufactory in Birmingham, England, and the first steam engines were completed in 1776. Later advances included Watts’ double-acting engine of 1782, in which steam moved the piston in both directions.

The first successful steam railway locomotive, the Penydarren locomotive developed by Richard Trevithick (1771-1833) in 1804, is honored on one of the two nondenominated (85p) first-class stamps.

In February 1804, the Penydarren locomotive pulled a 10-ton load of iron and approximately 70 men over a distance of 9 miles.

Royal Mail notes that this achievement “was the first documented demonstration that a steam engine could travel on iron rails and pull a load.”

James Hargreaves (circa 1720-78) is credited with producing the first useful spinning machine that employed more than one spindle around 1764. This innovation, commonly called the spinning jenny, is celebrated on the other first-class stamp.

“The machine came to be known as a spinning ‘jenny’, probably derived from a dialect pronunciation of the word ‘engine’, a term that commonly meant machine,” Royal Mail said.

The spinning jenny sparked increases in yarn productivity and was used in some areas of the textile industry for 100 years after it was developed.

Lombe’s silk mill and Portland cement are commemorated on the pair of £1.70 Industrial Revolutions stamps.

The five-story silk mill named after John Lombe (1693-1722) and his half-brother Thomas Lombe (1685-1739) helped revolutionize the process of silk throwing, which involves the cleaning of skeins (loose coils) of silk and then winding them onto bobbins.

Joseph Aspdin developed Portland cement in 1824. It is similar to Portland stone, for which it is named.

Joseph Bazalgette (1819-91) used Portland cement to construct London’s labyrinthine network of sewers because he “was convinced that it was essential if the sewers were to work efficiently and be long-lasting,” according to Royal Mail.

The accompanying souvenir sheet of four celebrates key developments in the electrical revolution. “The Electric Revolution” is printed in the selvage at top, and “Wonders of the Age” and “Harnessing the Power of Electricity” appear in the bottom selvage.

British experimenter Michael Faraday’s landmark 1831 generation of electricity using only a coil wire and a magnet is honored on the second-class stamp at top left. Faraday’s device is prominently featured in the design, and his accomplishment is summarized across the bottom of the design, “Laying the foundations for future electricity generation.”

The first-class stamp at top right recognizes the laying of the first trans-Atlantic cable in 1858. Two individuals are seen shaking hands, symbolizing the cable connection between the United States and Great Britain. “Communication in seconds through 2000 miles of cable” is printed at the bottom of the stamp.

The early failure of the 1858 cable prompted an investigation that eventually led to improved procedures (including the use of common electrical units of measurement) and the laying of the first successful trans-Atlantic cable in 1866.

Joseph Wilson Swan’s development of the incandescent light bulb in Great Britain is commemorated on the £2.55 stamp at bottom right. The stamp pictures an image of Swan’s light bulb at right. An inscription at bottom left states he is “the founder of the Swan Electric Light Company.”

Royal Mail observes that Swan (1828-1914) received a patent for his light bulb in 1880 and “opened a factory in Newcastle-upon-Tyne to make bulbs that soon afterwards lit up the Savoy Theatre in London.”

All 10 Industrial Revolutions stamps are moisture-activated with PVA gum, according to Royal Mail.

The Industrial Revolutions stamps and related products are available online from Royal Mail.