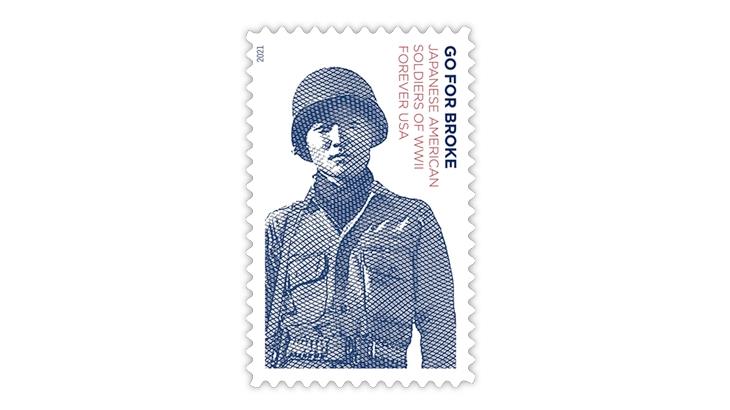 The intaglio-printed (engraved) bicolor Go For Broke: Japanese American Solders of WWII forever stamp will be issued June 3 in a pane of 20. 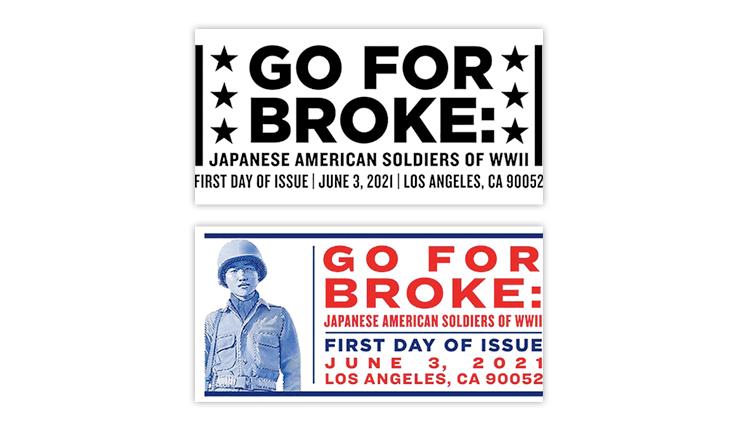 Two pictorial first-day cancels for the Go For Broke: Japanese American Soldiers of WWII forever stamp highlight the issue’s title. The color postmark also reproduces the image of the soldier featured in the stamp vignette.
Previous
Next

The U.S. Postal Service has titled the nondenominated (55¢) stamp Go For Broke: Japanese American Soldiers of WWII. It will be issued June 3 in a pane of 20.

The Postal Service specified that the Japanese Americans who served in the military during WWII prefer not to have hyphenation in the term “Japanese American,” even when it modifies a noun.

In an unusual move for the present day, the Postal Service chose to print the stamp in two colors and use an intaglio press, which incorporates recess printing elements in the stamp design, for part of the design.

The Postal Service described the stamp design as “made to resemble an engraving.”

USPS spokesman Roy Betts told Linn’s Stamp News that the blue elements of the stamp are printed intaglio, and the red elements are printed by offset.

“It was done this way to avoid contamination between the two colors in the intaglio process that would have resulted in areas of purple, rather than the crisp red and blue,” Betts noted.

Once the most common method of stamp production, intaglio printing was almost entirely supplanted by photogravure printing in the 1970s, followed soon thereafter by less costly multicolor offset lithography in the 1980s.

Lithography still reigns today as the method most used to print U.S. stamps.

“With this commemorative stamp, the Postal Service recognizes the contributions of Japanese American soldiers, some 33,000 altogether, who served in the U.S. Army during World War II,” the agency said when announcing the upcoming issue.

The phrase “Go for Broke” is described as the motto of the all-Japanese American 100th Infantry Battalion/442nd Regimental Combat Team and came to represent all Japanese American units formed during WWII.

The stamp design by USPS art director Antonio Alcala portrays a soldier from the 442nd as he appeared in a photograph taken at a French railroad station in 1944.

Reading down from the upper right corner of the stamp design is the inscription “GO FOR BROKE” in blue, and “JAPANESE AMERICAN SOLDIERS OF WWII” and “FOREVER USA” in red.

The Postal Service describes the color scheme as patriotic, and the position of the lettering as suggestive of the vertical style in which Japanese text was traditionally written.

The official city of issue for the new stamp is Los Angeles, Calif. Although some recent first-day ceremonies have been opened to the public, the USPS first-day ceremony for the Go For Broke stamp will take place online at 11 a.m. Eastern Time on June 3.

“For a time, these second-generation Japanese Americans, known as Nisei, were denied the opportunity to fight despite being American citizens,” the Postal Service said.

Following the Japanese attack on Pearl Harbor in Hawaii and America’s entry into WWII, Japanese American families living in the United States were often unfairly looked upon with suspicion by their neighbors.

President Franklin D. Roosevelt signed an executive order Feb. 12, 1942, that sent more than 120,000 individuals of Japanese American heritage to detention camps for the rest of the war.

“Despite this injustice, 33,000 Americans of Japanese heritage enlisted anyway to show their American loyalty and help in the U.S. war effort,” according to a group that campaigned for a stamp to honor these soldiers, Stamp our Story.

“The 100th/442nd RCT would become the most decorated unit for its size and length of service in U.S. history, including 21 Medals of Honor, and 8 Presidential Unit Citations,” the group reported.

According to the National Park Service, which maintains the National World War II Memorial in Washington, D.C., the 442nd Regimental Combat Team fought up the rugged Italian peninsula and across southern France.

“Others interrogated Japanese prisoners and translated Japanese documents in the Army’s Military Intelligence Section in the Pacific and China-Burma-India Theaters,” the Park Service said.

The space includes a memorial wall inscribed with the names of more than 800 Japanese American soldiers killed in action during WWII.

Another inscription on the memorial recognizes “Executive Order 9066 which resulted in the removal of 120,000 Japanese American men, women and children from their homes in the western states and Hawaii” and notes that a federal commission in 1983 described this action as “a grave injustice.”

The new commemorative is the first U.S. stamp to directly honor Japanese American soldiers, but an earlier issue recognized the important contributions of two servicemen from the Army’s 442nd Regimental Combat Team.

Sakato was present at the first-day ceremony held at the National World War II Memorial, as was Inouye’s widow, Irene Hirano Inouye.

Two pictorial first-day cancels for the new stamp, one in black and the other in red and blue, highlight the issue’s name. The color postmark includes the image of the soldier featured on the stamp.

Technical details and first-day cancel ordering information for the Go For Broke: Japanese American Soldiers of WWII stamp can be found in the box on this page.