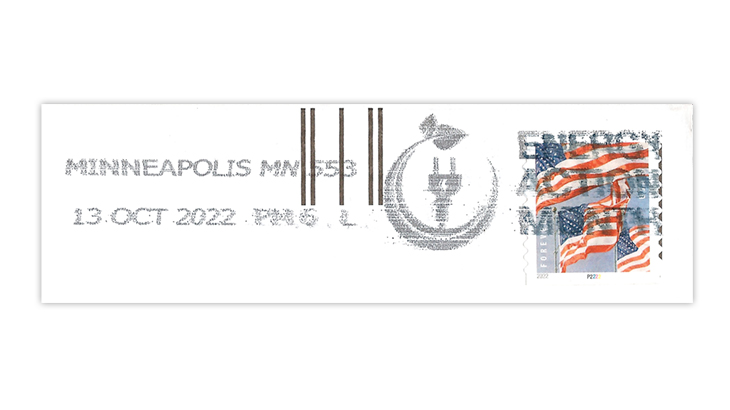 For the second time in two months, a new plate number for an existing United States coil stamp has been discovered.

Mohs, a member of the Plate Number Coil Collectors Club, said he was checking recent incoming material on Dec. 16, 2022, for plate numbers on coil stamps.

For this issue, both suppliers printed the small plate number below the design on every 31st stamp in a roll of 100.

(Banknote Corporation of America also supplies the U.S. Postal Service with Flag coil stamps in rolls of 3,000 and 10,000, in which the plate number interval is every 27th stamp.)

Mohs was surprised to find a 2022 Flag coil with plate number P2222. A close-up image cropped from the discovery envelope is shown here. He later found a second example postmarked in Minneapolis on Nov. 8.

“I found several rolls in a small post office in Virginia on December 28,” Covey said.

“That post office gets their coils from the Kansas City distribution center. In my experience, all the bigger post offices in Virginia have [Banknote Corporation of America] coils (with B1111).”

Mohs’ discovery follows on the heels of another discovery for Ashton-Potter supplied coil stamps reported in the Dec. 26, 2022, issue of Linn’s Stamp News. In late November, a collector found a 2016 1¢ Apples coil (Scott 5037) with plate number P222222. The issue was previously known only with plate number P111111.

For the 1¢ Apples coil, the USPS confirmed that Ashton-Potter printed coil rolls of 10,000 using a different paper. Examples of the original and later printings of 1¢ Apples coil stamps look identical at first glance. But under longwave or shortwave ultraviolet light, stamps from the later printing on different paper glow brightly, while stamps from the original printing do not glow.

Per USPS policy since 1991, stamps denominated less than 10¢ are not tagged. This is done to hinder their use as if they were tagged first-class rate stamps, which activate the Postal Service’s facer-canceler equipment. Letters without tagged stamps can be redirected for inspection.

Under current USPS stamp-issuing policy, printers are allowed to change plate numbers only when a stamp’s production method changes. Prior to 2006, printers assigned higher plate numbers per ink color to each replacement printing plate or cylinder.

This often led to a high quantity of plate number combinations. Nowadays, a simple succession of plate numbers, such as P1111 to P2222, is used in the rare instance of changing the paper type or revising how phosphor tagging is applied.

Since I’ve discussed phosphor tagging, note that it might be behind a different paper change instead of the aforementioned reason for the P2222 Flag coil. Paper and taggant costs, or supply logistics, occasionally favor use of prephosphored paper. Such a substitution has occurred in the past.

Interestingly, in his Philatelic Foreword column in the Dec. 19, 2022, issue of Linn’s, Jay Bigalke described Ashton-Potter’s switch in paper for its booklet version of the 2022 Flag forever stamp (Scott 5659) with plate number P2222.

In that column, Bigalke pictures under ultraviolet light a block of four 2022 Flag forever stamps with plate number P2222 and a single example of the same stamp from the original P1111 printing. The tagging of the stamp from the P1111 printing shows the traditional warm yellow green glow.

A response from the USPS to Linn’s inquiry about the reason for the new P2222 plate number for the 2022 Flag coil stamp in rolls of 100 was not received by the time this issue of Linn’s went to press.

With Ashton-Potter’s known changes in 2022 now up to three issues, I also asked the USPS if the 3¢ Strawberries or 5¢ Grapes coil stamps have been printed with new paper. Ashton-Potter is currently the only supplier of these two low-denomination coil issues. A reply from the USPS was not received.