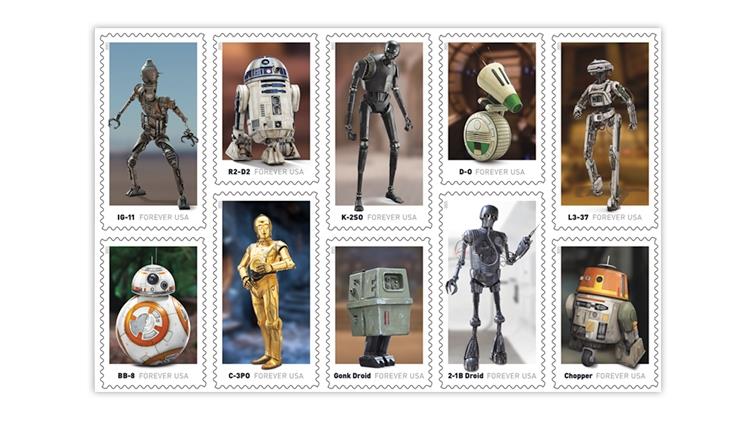 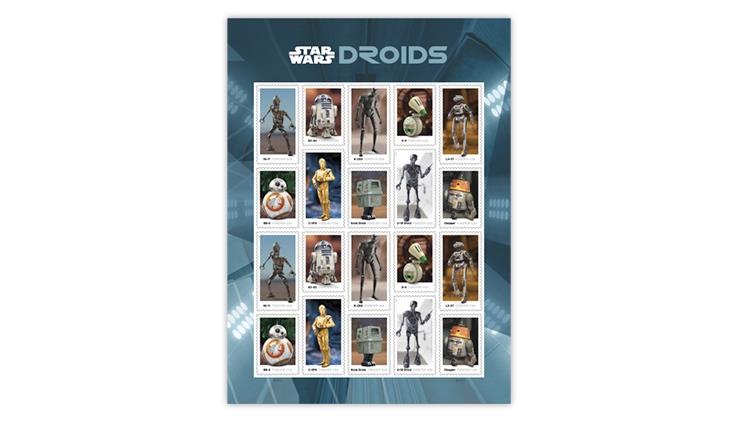 The new Star Wars Droids forever stamps will be issued in a pane of 20, with each character depicted on two stamps. The pane’s decorative selvage features a passageway in the floating Cloud City above the planet Bespin. 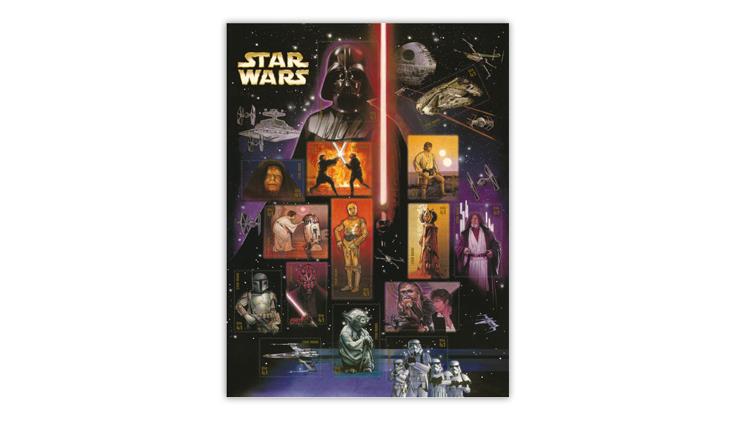 A set of 15 41¢ Star Wars stamps was issued in 2007 to commemorate the first feature film in the Star Wars series. Two familiar droids from the 2007 set, R2-D2 and C-3P0, also appear on forever stamps in the new set. 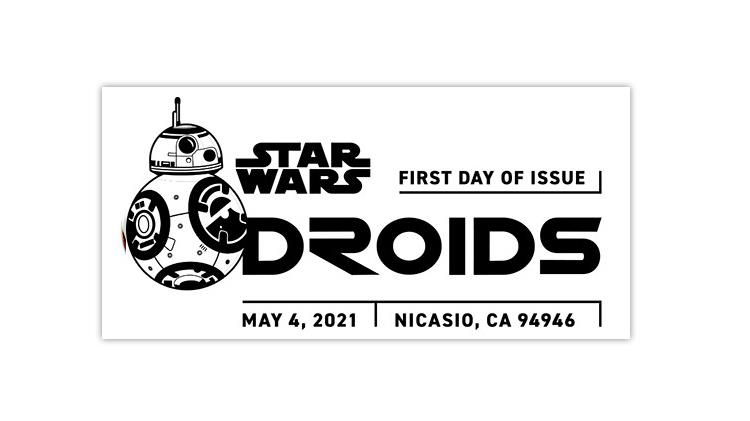 The U.S. Postal Service has created a black pictorial first-day cancel that shows BB-8, who appeared in the final three Star Wars films in what is known today as the Skywalker saga. 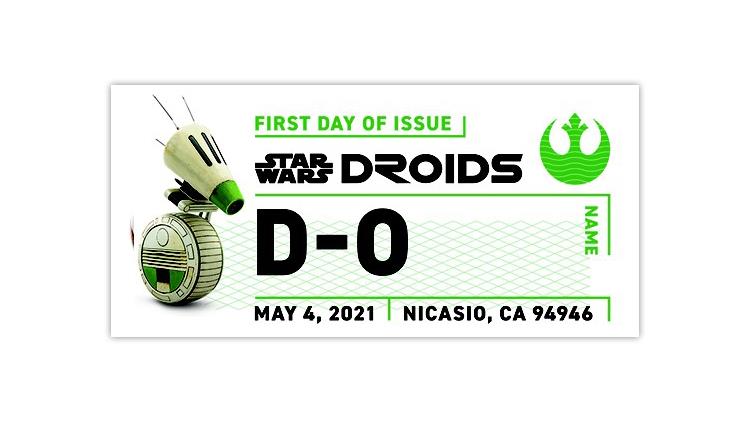 Color first-day cancels for the Star Wars Droids set are offered with 10 designs, one matching each of the 10 forever stamps in the set.
Previous
Next

The nondenominated (55¢) Star Wars Droids stamps will be issued May 4 in a pane of 20.

Devout Star Wars fans celebrate May 4 as an informal Star Wars Day, because the date (as “May the Fourth”) serves as a pun of the ritual Jedi expression, “May the Force be with you.”

Lucasfilm, the studio that created the Star Wars franchise, is celebrating its 50th anniversary in 2021.

The Postal Service has planned a virtual first-day ceremony for these stamps at 11 a.m. on the issue date. The event will take place on the USPS Facebook and Twitter pages.

Details posted on the USPS website include instructions to view the event.

A Disney/Lucasfilm representative to be determined will participate in the ceremony, according to the Postal Service, along with USPS executive vice president Isaac Cronkhite.

The designated city of issue is Nicasio, Calif., the location of Skywalker Ranch, a part of Lucasfilm.

Each stamp in the new set shows a single droid (mechanical android) that has appeared in one or more feature films in the fictional Star Wars media franchise, or in an offshoot television or streaming series.

The droids are each depicted against an indistinct background representing “settings of memorable adventures,” according to the Postal Service.

Each stamp is inscribed with the alphanumeric name of the featured droid and “FOREVER USA.”

The stamp pane selvage pictures a passageway from the floating Cloud City above the planet Bespin, a setting introduced in Star Wars: The Empire Strikes Back (1980).

Greg Breeding designed the stamps, working with USPS art director William Gicker. In an interview with StarWars.com, Breeding explained that he was free to “dig through” the Disney/Lucasfilm property as he sought out images that would work best as stamp subjects.

“These set of droids are a nod to Lucasfilm’s, as well as its parent company, Disney’s, commitment to science, technology, engineering, and math (STEM) learning and the continued collaboration between ‘Star Wars: Force for Change’ and global pre-K-12 nonprofit organization ‘FIRST’ (For Inspiration and Recognition of Science and Technology),” according to the Postal Service.

“‘Star Wars: Force for Change’ and ‘FIRST’ have joined forces to expand access to STEM learning to more young people around the world, and to help them envision a brighter, more inclusive future.”

The new stamp set is the second (or third) issue from the USPS to celebrate the Star Wars phenomena.

A pane of 15 41¢ stamps featuring characters from the first six live-action feature films (Scott 4143) was issued May 25, 2007, to commemorate the 30th anniversary of the first feature film in the series.

Five months later, a 41¢ stamp picturing Jedi grandmaster Yoda was issued in a separate pane of 20. The Yoda stamp (Scott 4205) adapted the design of a nearly identical stamp from the earlier issue (4143n).

These droids, easily the most familiar of them all, are also depicted on individual stamps in the new set. R2-D2 and C-3PO are the only characters who have appeared in all nine of the live-action Star Wars films that comprise what is known today as the Skywalker saga.

The tall and polished C-3PO is described as a protocol droid, and while he performs an instrumental role in many of the films, he also serves as comic relief with his quirky movements and excitable nature.

His companion R2-D2 is an astromech droid, equipped for certain mechanical and interfacing tasks, including navigation responsibilities in various spacecraft.

The droid IG-11 was introduced in the live-action series The Mandalorian, which debuted on the Disney+ streaming service in 2019. Originally a deadly bounty hunter, IG-11 was reprogrammed in the first season of the series to protect the precious child he first sought to kill.

The compact little droid named D-O was first spotted in the most recent feature film in the series, Star Wars: The Rise of Skywalker (2019). Abandoned and deactivated after the death of his Sith master, D-O assists resistance allies Rey, Finn and Poe Dameron in their efforts to thwart the evil Darth Sidious.

L3-37 is the custom-made feminine navigator and co-pilot to the smuggler Lando Calrissian in the 2018 stand-alone film Solo: A Star Wars Story. She was severely damaged during the mission to Kessel, but Lando later uploaded L3’s data into his ship, the Millennium Falcon.

The astromech droid BB-8 was introduced as an unexpected companion for Rey in the 2015 film Star Wars: The Force Awakens, and he returned in the two films that conclude the Skywalker saga, Star Wars: The Last Jedi (2017) and Star Wars: The Rise of Skywalker. Rey learns that BB-8 belongs to Resistance fighter pilot Poe Dameron, and the little droid develops as an important contributor in the effort to defeat the First Order.

The Postal Service describes the GNK gonk droid as “a vital walking battery working to provide power to the highly mechanized galaxy.” From their initial appearance in the first Star Wars film in 1977, various gonk droids continued their support roles in several of the subsequent movies.

In Star Wars: The Empire Strikes Back, the surgical droid 2-1B twice treats young Resistance fighter Luke Skywalker, first after he is attacked by a savage wampa ice creature, and then to attach a new cybernetic hand to Luke’s arm after his hand was lost in a fierce battle with Darth Vader.

The C1-10P droid known as Chopper is another astromech droid, but his first appearance came in Star Wars Rebels, an animated series that debuted in 2014 on the Disney XD network. Chopper was also seen in a very brief cameo in Rogue One. In Star Wars Rebels, Chopper is part of the crew of the Ghost starship with rebel pilot Hera Syndulla.

“No other film fiction had ever portrayed artificial intelligence so developed and varied,” the Postal Service said in promotional material for the new stamp set. “Aside from the awe-inspiring designs of the droids, much of their appeal derives from their relatability as characters. Droids often exhibit free will, emotion, and funny, quirky personalities — by-products of accumulated exploits and cobbled-together programming.”

First-day cancels for the new stamps have pictorial elements that highlight the droids seen on the stamps.

The black cancel shows BB-8 with the familiar Star Wars title lettering and the word “DROIDS.”

Ten different digital color postmarks each show the name and an illustration of one of the droids on the stamps. “Each No. 6¾ envelope bears an affixed Forever stamp cancelled with an official First Day of Issue postmark that was custom-created to pair with that particular stamp design,” the Postal Service wrote to describe the color postmark FDC set it will market.