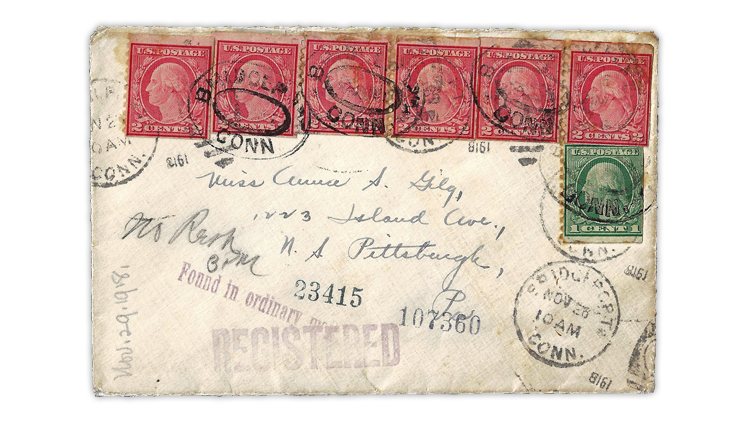 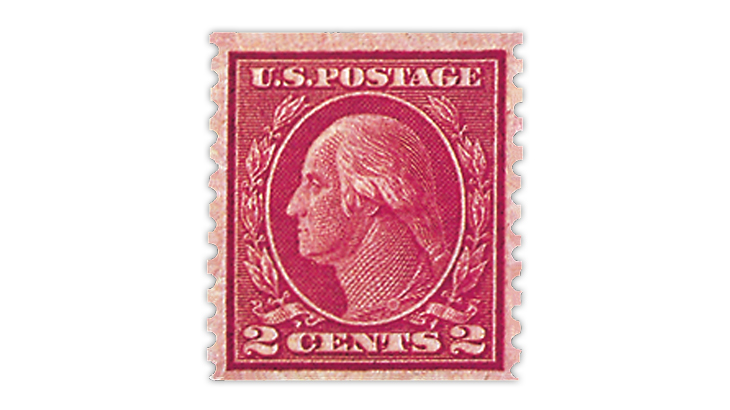 United States Scott 491 (pictured here as an unused single stamp) is a type II coil that has specific characteristics that cause it to carry a big value.
Previous
Next

A stamp and postal history collector and researcher in the United States has discovered a rare on-cover usage of the 1916 2¢ carmine George Washington horizontal coil stamp, type II, a major variety listed in the Scott Specialized Catalogue of United States Stamps and Covers as U.S. Scott 491.

Indications are that the cover Steve Unkrich found and purchased on the international online marketplace Delcampe.net has had a rough ride through life, but that’s not unusual for century-old finds of this nature.

The cover is franked with six examples of the 2¢ coil from the Washington-Franklin series — two singles and two pairs — plus one 1¢ green horizontal coil stamp (Scott 490). The perfs have been trimmed off four stamps and, according to the American Philatelic Expertizing Service, there is gum on the face, one stamp is creased, and the cover is “soiled, stained, creased and torn.”

The individual stamps each show evidence of affixing machine gripper bars along the top of the stamp design.

On the other hand, Unkrich tells Linn’s Stamp News that there are only 15 other covers recorded bearing any of the type II coil, all certified by the Philatelic Foundation.

And his discovery cover is now the one franked with the largest number of Scott 491 stamps, and it is also the only cover bearing that stamp sent by registered mail.

In a U.S. Stamp Facts feature published in the April 1, 2002, Linn’s, Larry S. Weiss illustrated a similar cover mailed by special delivery on June 23, 1917, from Lansing, Mich., to Detroit.

“This is the only documented cover bearing two or more examples of this 2¢ horizontal coil stamp,” the feature explained. The envelope illustrated in the 2002 feature is franked with five of the 2¢ coil stamps (a single and two pairs) and a single 2¢ sheet stamp.

The value for a cover of this sort can be hard to determine, but you can start with the Scott catalog value of $1,100 for a single on-cover example of Scott 491 (the Unkrich cover has two of these), and a $3,750 Scott value listed for a used pair of the 2¢ coil (the cover also has two of those).

The rough shape of the stamps and cover may push the value one way, and rarity factors could send it in the other direction. Market demand can affect the value either way.

The cover has a Nov. 26, 1918, Bridgeport, Conn., postmark. It is addressed to Pittsburgh, Pa., and struck with two purple handstamps: “REGISTERED” and “Found in ordinary mail.”

The cover was simply described on Delcampe.net as a “Registered cover from Bridgeport, Conn.,” Unkrich said.

He added that the affixed 1¢ stamp pays the extra postage for the war rate that went into effect one year earlier. The six 2¢ stamps paid the remaining 2¢ in domestic letter-rate postage plus a 10¢ registry fee.

The image of the cover on the website was not top-notch, Unkrich told Linn’s, but he had a suspicion that the stamps on it could be the elusive type II.

Unkrich told Linn’s that he regularly searches using different descriptions on online commerce sites, and then sifts through the returns to see what he might find.

The 2¢ type II coil on this cover has a deceptively common appearance, much like millions and millions of other far less valuable 2¢ carmine stamps that carried the mail in the early years of the 20th century.

The type II George Washington stamp is characterized by differences in the thickness of the shading lines on the toga button and rope near George Washington’s neck, along a straggling lock of Washington’s hair in front of his left ear, and in the ribbon below the portrait.

The design characteristics that define the type II stamp are described and illustrated in the Scott U.S. Specialized catalog.

The main difference between Scott 491 and the very similar Scott 454, another 2¢ carmine type II horizontal rotary press coil, is that Scott 454 has the USPS single-line watermark, and Scott 491 is on unwatermarked paper. Professional expertizers lift a stamp on cover to check this defining element.

The total quantity issued of the unwatermarked type II horizontal rotary press coil is estimated at a mere 295,500.

Unkrich told Linn’s that he’ll probably add the cover to his collection and hang on to it for a while.

He is a member of the American Philatelic Society, the United States Stamp Society and the American Revenue Association. He stays current reading the journals these groups publish, and he has developed a substantial personal philatelic library.

“The rare material is still out there,” Unkrich said. “There aren’t any secrets to finding it. All the information is in the catalogs and the available literature, and I encourage all collectors to join a group associated with their interest.”