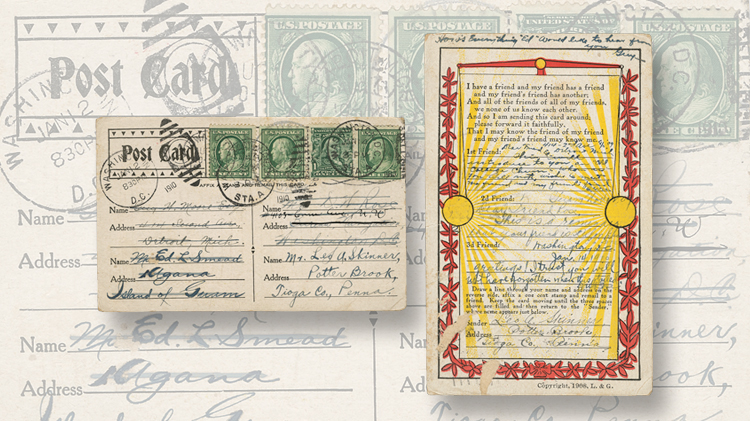 This postcard traveled more than 16,000 miles in four trips, with a 1¢ stamp added for each leg of the journey. The front of the postcard gives instructions on how to re-mail the card to the next recipient, and provides space for each recipient to write a

And in the category of most miles a domestic postcard has traveled, we have the entry reported by Linn’s reader Daniel Richmond, of Frederick, Md. Mailed in Washington, D.C. on Jan. 4, 1910, it was sent Detroit, Mich., and then to Agana in the United States territory of Guam in the Western Pacific.

From Guam, the postcard made its way back to Washington and then on to Potter Brook, Pa.

The postcard started out with just the 1¢ Benjamin Franklin stamp at right. Another unused stamp was added at each stop to pay the onward charge. Some mailing dates are hard or even impossible to figure out because major parts of cancellations are hidden under the added stamps.

The total mileage from start to finish would have been every bit of 16,500 miles.

The front of the postcard, shown here, instructs users how to mail these cards. Here is the text:

Further instructions are below the space for three friends to write a note. This second set of instructions reads: “Draw a line through your name and address on the reverse side, affix a one cent stamp and remail to a friend. Keep the card moving until the three spaces above are filled, and then return to the Sender whose name appears just below.”

That card made six stops, probably the record holder for most locations visited. All were in Ohio, so the distance traveled would not have been that great.

This is the sort of thing people did for amusement before there were hundreds of television channels available to occupy our time.