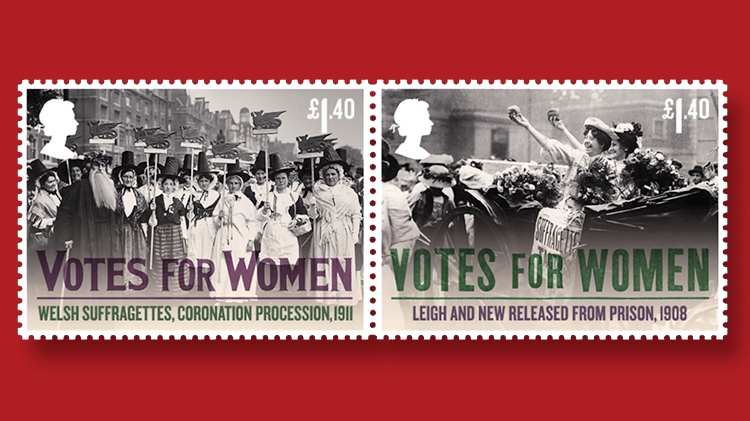 The two £1.40 Votes for Women stamps feature Welsh suffragettes in traditional costume, and the release of Mary Leigh and Edith New from prison in 1908. Leigh and New were taken into custody for throwing stones at 10 Downing Street. The denomination is fo 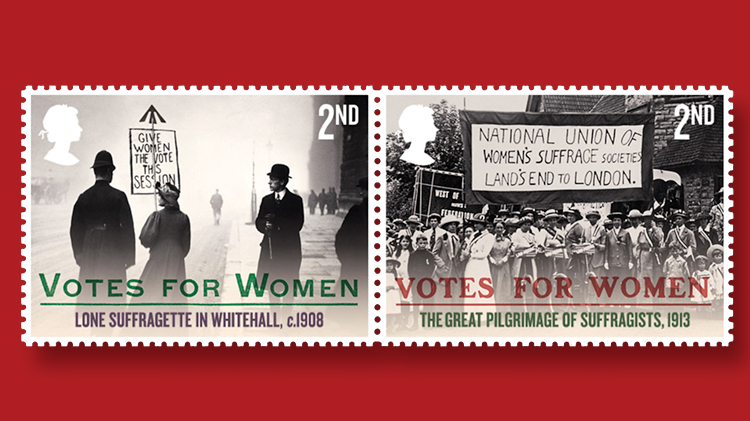 Great Britain’s Royal Mail commemorates the Representation of the People Act where for the first time women won the right to vote in parliamentary elections on eight stamps issued Feb. 15. The two nondenominated second-class stamps in this Votes for Women 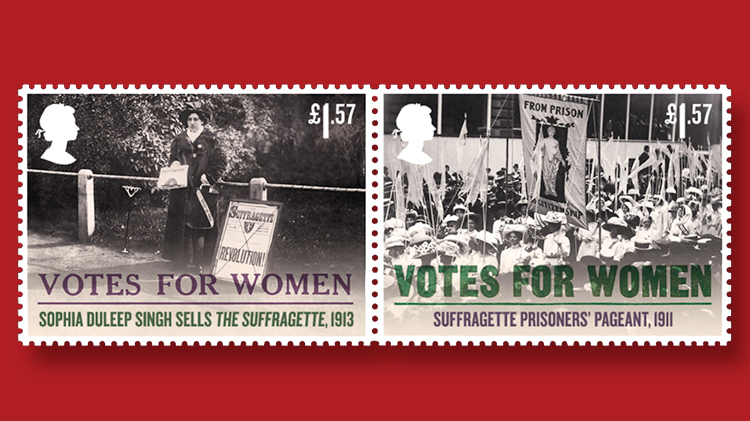 The £1.57 stamp pair include a photo of Princess Sophia Duleep Singh selling The Suffragette newspaper and a photo of the suffragette prisoners’ pageant in 1911. 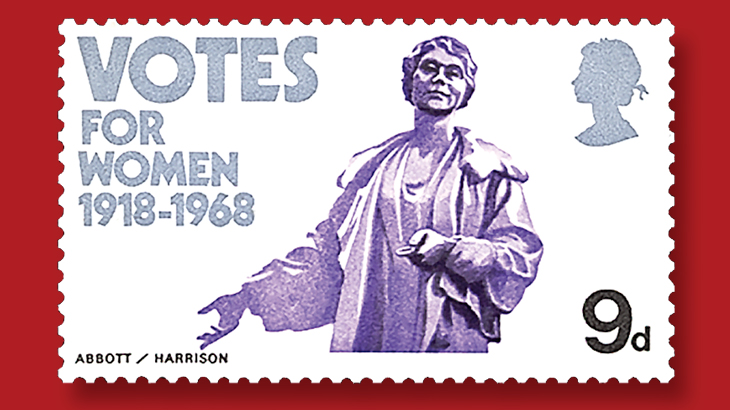 Great Britain commemorated the 50th anniversary of women’s suffrage on a 9-penny stamp issued May 29, 1968. The stamp depicts a statue of Emmeline Pankhurst. Her daughter Christabel is shown on one the new Votes for Women stamps issued Feb. 15. 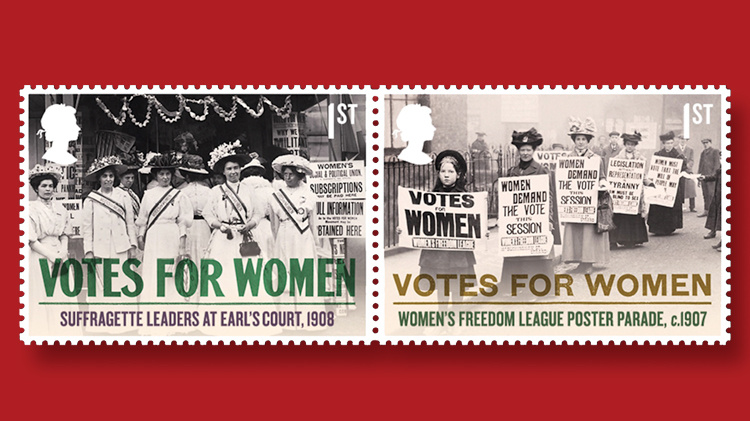 The pair of first-class stamps includes a photo of suffragette leaders at Earl’s Court, pictured from second left to right are Mabel Tuke, Christabel Pankhurst, Emmeline Pethick-Lawrence and Annie Kenney. Completing the stamp pair is a photo from the 1907
Previous
Next

Great Britain’s Royal Mail is issuing a set of stamps Feb. 15 to celebrate the 100-year milestone of women’s suffrage in the United Kingdom. The Representation of the People Act was passed on Feb. 6, 1918, granting some women the right to vote.

Prior to 1918, a decades-long movement gained momentum, as women — and men — campaigned peacefully for women’s right to vote. These suffragists formed the National Union of Women’s Suffrage Societies (NUWSS).

Other women used more militant actions in order to be heard, and they had their own group as well — the Women’s Social and Political Union (WSPU), or more commonly referred to as “suffragettes.”

The stamps in Great Britain’s Votes for Women issue call attention to both of these groups that were fighting for women’s right to vote, major events during the crusade and activists made famous during that time.

“Our Votes for Women stamps convey the scale of activities that the different organizations undertook in their tireless campaigning for the vote,” said Liz Law, Royal Mail spokesperson.

The set includes eight stamps in four se-tenant (side-by-side) pairs. The designs feature black-and-white photographs with the text “Votes for Women” displayed prominently and a brief explanation of what is being depicted.

Design firm Supple Studio explained on its website the stamps’ creation process: “We used a variety of typographic treatments lifted from campaign paraphernalia of the period and applied to a set of powerful portraits.”

A nondenominated second-class stamp shows a lone suffragette protesting in Whitehall, circa 1908. The woman is walking in the road because demonstrations on pavement were not allowed; violators were often arrested.

The great pilgrimage of suffragists during the summer of 1913 is captured on the second stamp in this pair. The National Union of Women’s Suffrage Societies organized this event to show the amount of women asking for the right to vote through nonmilitant action. Women marched from all over England for five weeks, culminating in a rally of 50,000 women in Hyde Park.

Christabel Pankhurst’s mother, Emmeline Pankhurst, was featured on Britain’s 1968 9-penny commemorative marking the 50th anniversary of the women’s right to vote (Scott 565). That stamp also is inscribed “Votes for Women.” In addition, a portrait of Emmeline Pankhurst is shown on a stamp (Scott 2387) in the 2006 issue marking the 150th anniversary of the National Portrait Gallery.

Completing the new first-class stamp pair is a photo from the 1907 Women’s Freedom League poster parade.

The two £1.40 stamps feature Welsh suffragettes in traditional costume during the Women’s coronation procession in 1911, and the release of Mary Leigh and Edith New from prison in 1908. The duo has been taken into custody for throwing stones at 10 Downing Street.

Princess Sophia Duleep Singh, daughter of Maharaja Duleep Singh, is pictured selling The Suffragette newspaper on one of the £1.57 stamps. The princess’ father was close to Queen Victoria, who allowed the family to reside in one of the Hampton Court Palace apartments. A Women’s Social and Political Union member, Singh was often seen selling the paper outside the palace.

The suffragette prisoners’ pageant in 1911 is depicted on the second £1.57 stamp.

Part of the suffrage coronation procession, the “pageant” included 700 women dressed in white holding silver lances with pennants while marching to symbolize the number of women jailed.

International Security Printers printed the stamps by lithography. Each stamp measures 41 millimeters by 30mm and is perforated gauge 14.5 by 14.

The Representation of the People Act was a huge milestone, but there was still work to do. The act allowed women 30 years of age and older who met a property qualification the right to vote in Parliamentary elections. According to Parliament.gov,
8.5 million women met the criteria, but this number only represented 40 percent of the United Kingdom’s total female population. The same act also decreased the voting age for men to 21 and removed their property prerequisite.

The Equal Franchise Act of 1928 leveled the playing field, granting women the same voting rights as men in the United Kingdom.

Parliament is celebrating the anniversary with a “Vote 100” campaign that includes personal stories of how the laws have changed lives. A series of exhibitions and events centered on educating the public about the women’s suffrage struggle are scheduled throughout 2018.

For more information on the Vote 100 campaign, click here.

Royal Mail’s other products for the Votes for Women set include first-day covers, eight postcards reproducing the designs of the stamps, and a presentation pack with mint examples of the stamps and text by written by women’s suffrage expert Elizabeth Crawford.