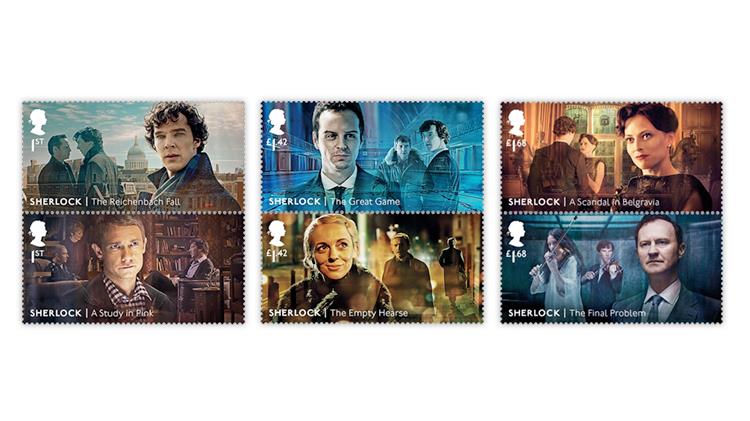 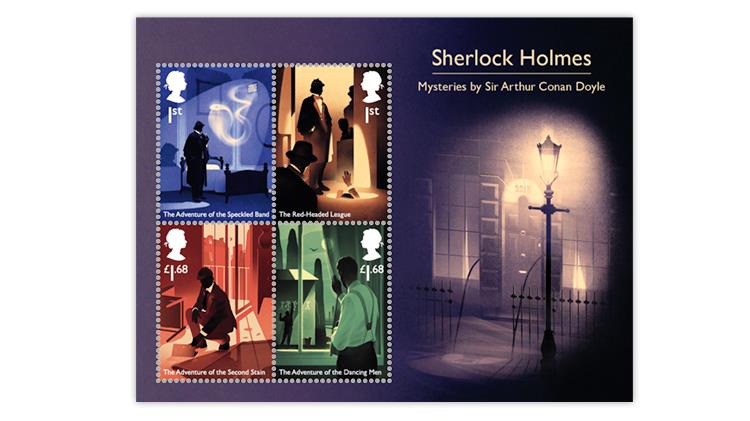 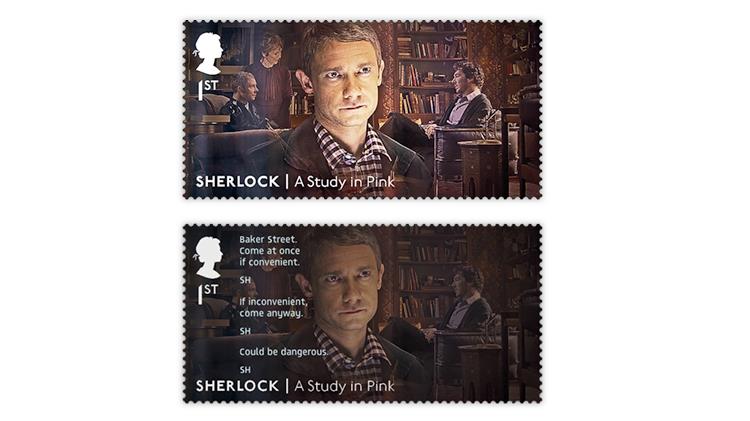 When ultraviolet light is shone over the Sherlock stamps hidden details from the episode story line are revealed. For example on this nondenominated first-class stamp, text messages Sherlock Holmes sent Dr. Watson in the episode A Study in Pink can be see
Previous
Next

Six of the stamps, in three se-tenant (side-by-side) pairs, show scenes from the BBC television series Sherlock. This crime drama, which debuted in 2010, has been broadcast in more than 180 countries, including the United States.

The other four stamps are se-tenant in a single souvenir sheet and feature illustrations representing four of Arthur Conan Doyle’s Sherlock Holmes stories. A physician-turned-author, Doyle (1859-1930) introduced Holmes and Dr. Watson in 1887 in A Study in Scarlet.

Each of the six stamps in three se-tenant pairs highlights a different character from Sherlock and features one episode from the television series.. These stamps also include hidden text that can only be seen under ultraviolet light.

In the press release announcing the Sherlock issue, Royal Mail described this text as “hidden details from the episode storyline.”

Royal Mail also said of the television series: “Devised and written by Steven Moffat and Mark Gatiss, Sherlock aired for the first time in July 2010. This interpretation of Conan Doyle’s mysteries offered audiences a fresh, modern take on his novels and short stories, with an irreverent tone and 21st century technology such as internet searches, texting and GPS. …”

The two leading characters of Sherlock — Holmes and Watson — are portrayed on the pair of nondenominated first-class stamps (currently 76 pence).

The stamp featuring Holmes includes scenes from the episode titled The Reichenbach Fall partially based on the story The Final Problem.

Sherlock’s first episode A Study in Pink, based on the aforementioned A Study in Scarlet serves as the backdrop for the stamp showcasing Dr. John Watson.

The BBC described this episode: “A war hero, invalided home from Afghanistan, meets a strange but charismatic genius who is looking for a flatmate — it is London in 2010, and Dr. Watson and Sherlock Holmes are meeting for the first time. A string of impossible suicides has Scotland Yard baffled — and only one man can help.”

Benedict Cumberbatch plays Holmes in the series, and Martin Freeman plays Watson. Freeman also appears on stamps of New Zealand as the character Bilbo Baggins in The Hobbit film trilogy. Cumberbatch was the voice of the Smaug in the trilogy, and that dragon is also pictured on a New Zealand stamp.

The pair of £1.42 stamps in Britain’s Sherlock issue features Holmes’ archenemy Jim Moriarty (actor Andrew Scott) in the episode The Great Game, and Mary Morstan (Amanda Abbington) in The Empty Hearse, respectively. Watson and Morstan become engaged in that episode.

The three Holmes’ siblings are pictured on the other £1.68 stamp. Sherlock’s brother Mycroft (Mark Gatiss) is depicted in the foreground. Shown in the background in a scene from the episode The Final Problem is Sherlock and his sister Eurus (Sian Brooke) playing violins.

The £1.68 stamps pay the rate for mail weighing up 100 grams sent to countries in Europe.

Royal Mail has previously honored Doyle (Scott 2697) and his stories on postage stamps (1515-1519, 1757), plus one stamp featuring Peter Cushing’s portrayal of Sherlock Holmes (3159), but none have presented the same stories as those shown on the four stamps in the new souvenir sheet.

Lithuanian artist Karolis Strautniekas created the illustrations for the stamps, as well as the image of the entrance to Holmes’ residence at 221B Baker Street shown in the selvage.

The designs of the two first-class stamps from the souvenir sheet also will be available in a booklet format. In addition to the two Sherlock stamps, the booklet will contain four first-class Queen Elizabeth II definitives.

So Design Consultants designed the six stamps. Each stamp is 60 millimeters by 30mm and is perforated gauge 14.5 by 14.5.

Other products offered by Royal Mail in conjunction with the Sherlock issue include first-day covers, a presentation pack, and 11 postcards reproducing the designs of the stamps and the souvenir sheet. The presentation pack includes the stamps and the souvenir sheet, as well as text by author and journalist Tom Huddleston about the Sherlock television series.

To order the stamps and related products, visit www.royalmail.com/sherlock.

Richard Doyle, Doyle’s great-nephew of Arthur Conan Doyle, said of Royal Mail’s Sherlock issue: “In the first chapter of my great uncle Arthur’s famous Sherlock Holmes novel, The Sign of Four, Sherlock remarks upon the sheet of stamps in Watson’s desk — imagine his consternation if it turned out to be this sheet of stamps! What would he have deduced from what he observed?

“I hope those who take a close look at these fascinating stamps, observing not just seeing, are inspired to read the original stories and novels written by my great uncle — Sir Arthur Conan Doyle.”