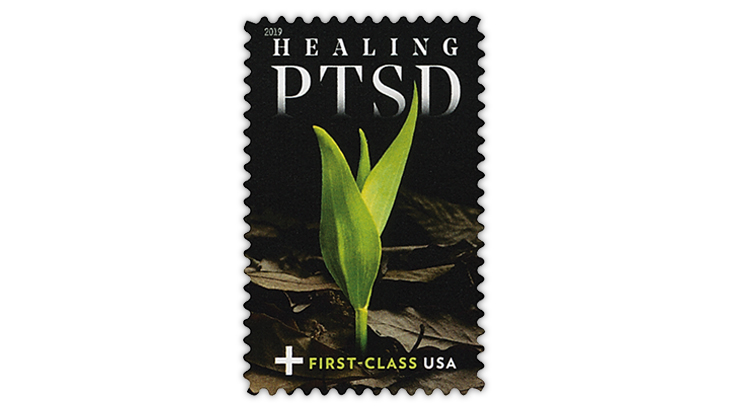 The United States Postal Service issued a Healing PTSD semipostal stamp (Scott B7) Dec. 2, 2019. As of the end of March, a total of 5.5 million stamps have sold.

It was recently brought to my attention that June is Post-Traumatic Stress Disorder (PTSD) Awareness Month, which got me thinking about semipostal stamps again.

The Healing PTSD semipostal stamp was issued Dec. 2, 2019, with a total of 40 million stamps produced. According to sales information provided by the United States Postal Service on its website, sales of this semipostal stamp through March have totaled 5.5 million, raising $556,000.

The sales of that stamp have done considerably better than the Alzheimer’s Awareness semipostal, the only other stamp that is part of the Postal Service’s discretionary semipostal program. Issued Nov. 30, 2017, with 50 million printed, only 8.2 million stamps had sold by the time it was taken off sale two years later, in November 2019. A little more than $1 million was raised.

USPS spokesman Roy Betts told Linn’s that there isn’t any update available on the Alzheimer’s Awareness semipostal returning to sale in the future.

Two semipostal stamps that were Congressionally mandated, the Breast Cancer Research and Save Vanishing Species stamps, remain on sale at post offices.

As of the end of March, the Breast Cancer Research stamp, which was first issued in 1998, has raised $91 million with more than 1.06 billion stamps sold.

The Save Vanishing Species semipostal, issued in 2011, has raised $5.8 million with more than 51.5 million stamps sold.

The sales numbers for semipostals are updated approximately monthly on the Postal Service website.

For those that are interested in the funds raised for these causes, that webpage would serve as a good resource.