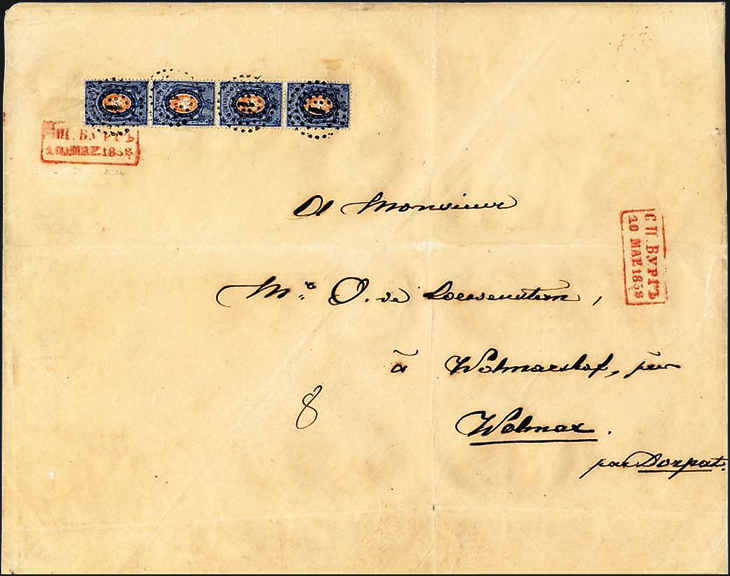 A rare cover franked with a strip of four of Russia’s 1858 20-kopeck stamp is among the offerings in the Dec. 6 Spink USA auction of classic Russian rarities. 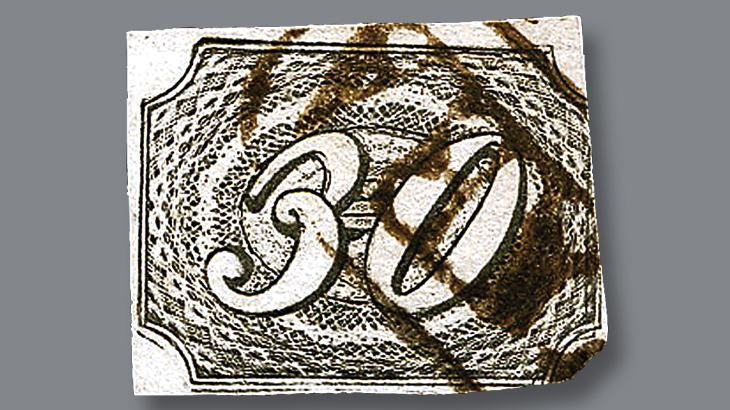 The Dec. 6-7 auctions series by Spink USA in New York will include issues of Brazil’s Inclinados series. This type II 30-reis black stamp on so-called Bull’s Eye paper is one of just four known.
Previous
Next

The first of the two specialized auctions offers the Inclinados stamps of Brazil, including rarities of that issue printed on what is known as “Bull’s Eye” paper.

This sale will be followed directly by rarities of classic Russian philately, comprising 18 lots of remarkable material from the earliest years of Russian postal history.

After Great Britain in 1840, Brazil was the second nation to issue its own stamps, in 1843. Known as “Bull’s Eyes” because of the black eye-shaped oval in the center, Brazil’s first stamps were replaced the following year by the “Inclinados” issue, slightly smaller stamps also printed in black (Scott 7-13). The “Inclinados” name comes from the slanted (or inclined) appearance of the numerals of value.

Three values from the early printing of this second issue were made using the thicker paper of the “Bull’s Eyes” stamps: the 30-reis, 60r and 90r (Scott 8-10). These thicker-paper printings are “considerably scarcer,” according to an editorial note in the Scott Classic Specialized Catalogue of Stamp and Covers 1840-1940.

The auction offers what Spink describes as “the rarest stamp in classic Brazilian philately.” It is a canceled single of the 30r black, type II, with “clear to ample margins, just clipped at right with tiny portion of paper loss at bottom right corner, well clear of the design, caused by acidic ink erosion.”

The stamp is described as having an insignificant slight thin at bottom.

Just two examples exist off paper, according to Spink: a former pair that was separated. The stamp on offer is from that pair. Another pair franks a postal history rarity known as the “Diamond cover,” bringing the total known examples to four.

The Russian rarities sale lives up to its name with a small but significant selection of stamps and postal history.

One standout is an 1858 cover from St. Petersburg to Wolmar, franked with a strip of four of the 20-kopeck blue and orange Coat of Arms stamps issued that same year (Scott 3). Spink describes the cover as an “incredible franking paying an unusually high rate in this early period, in a very good state of preservation for such a large piece, a unique and fabulous multiple on cover of utmost desirability, the largest recorded for this very rare value on cover, one of the two most important gems of Russian philately.”

The Spink Collectors’ series auction commences at 1 p.m. on Dec. 6, and concludes the following day.