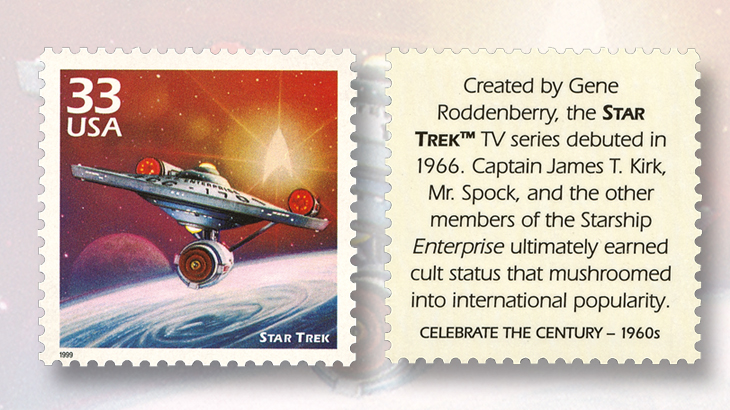 A 33¢ Star Trek stamp depicting the starship Enterprise was issued in 1999 as part of the Celebrate the Century set honoring the decade of the 1960s. Text on the back of the stamp describes the show’s creation and the great popularity of the Star Trek phenomenon. 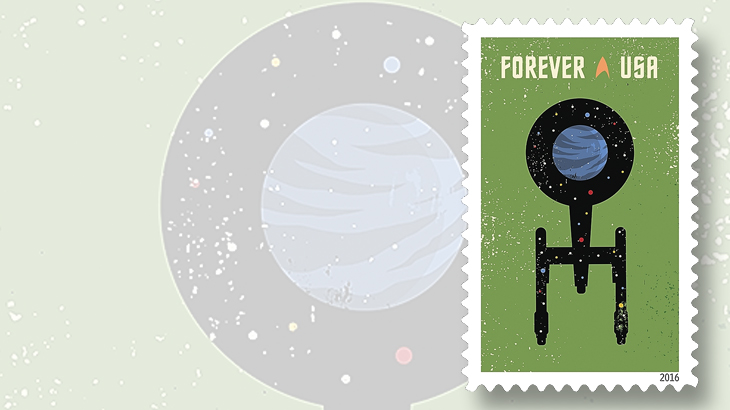 The USS Enterprise, seen from a bird's eye view, is featured on a U.S. forever stamp that's part of the new Star Trek series. 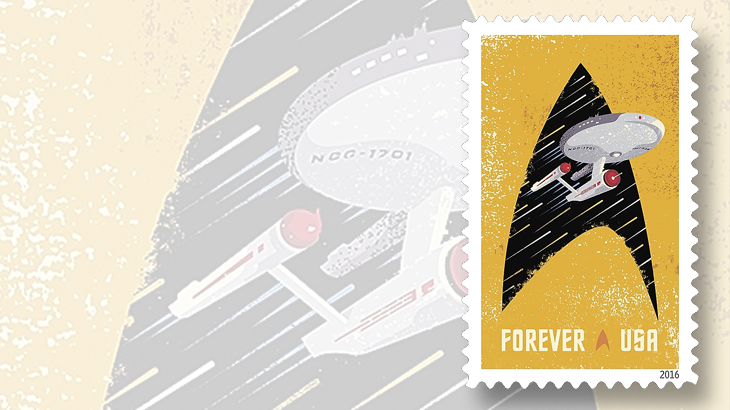 The United States Postal Service’s Star Trek forever stamps will be issued in a set of four on Sept. 2. The designs of the stamps show different elements of the Star Trek science fiction television series that debuted in 1966: the starship USS Enterprise with a Starfleet insignia. 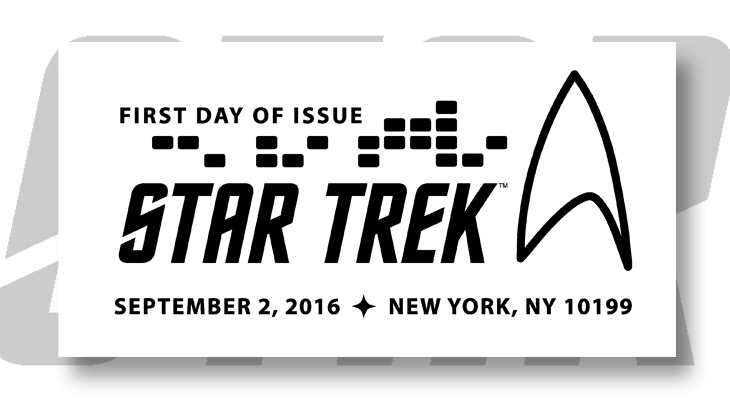 The first of two Sept. 2 pictorial postmarks for the new United States Star Trek issues that will be available on first-day covers. 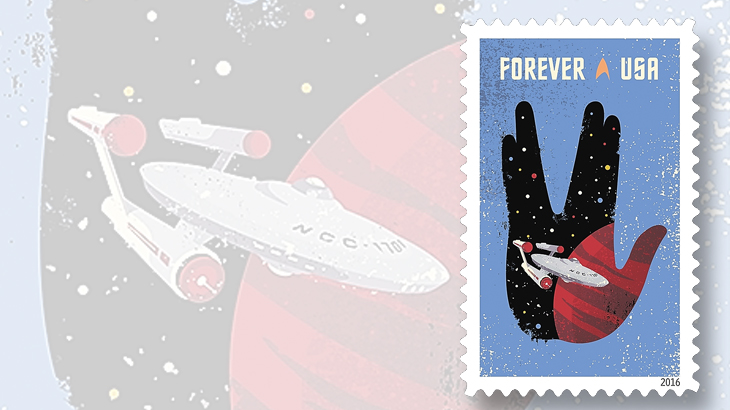 The USS Enterprise in orbit within a representation of the Vulcan salute is featured on a U.S. forever stamp that's part of the new Star Trek series. 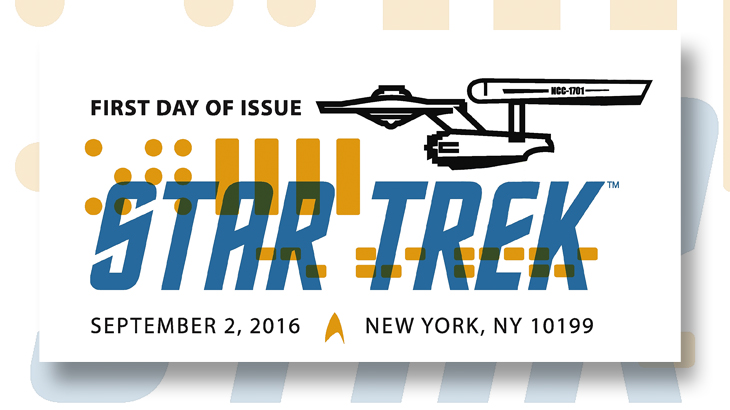 The second of two Sept. 2 pictorial postmarks for the new United States Star Trek issues that will be available on first-day covers. 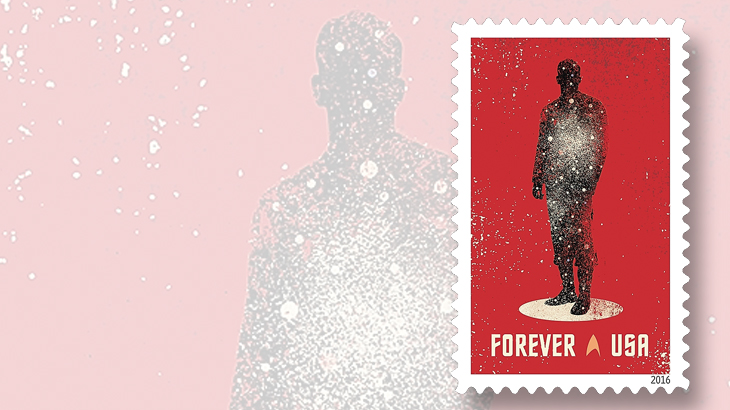 A crew member using the USS Enterprise transporter is featured on a U.S. forever stamp that's part of the new Star Trek series. 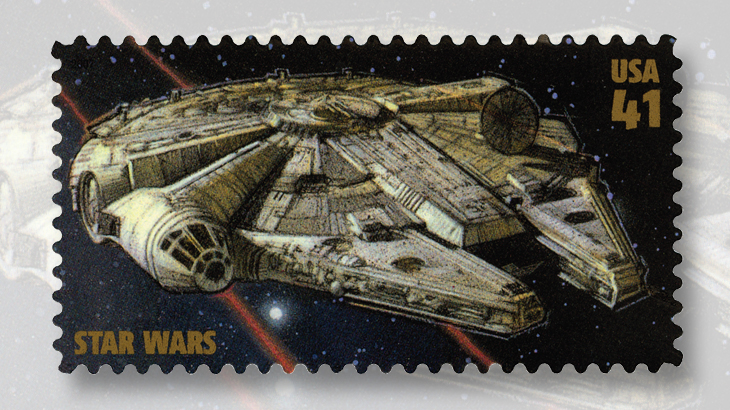 Several other U.S. stamps have featured space fantasy subjects, including the 15-stamp set honoring the Star Wars franchise in 2007.
Previous
Next

The stamps will be issued Sept. 2 in New York City in association with the fan convention Star Trek: Mission New York. The first-day ceremony is scheduled at noon in Room 1A06 at the Javits Convention Center, 655 W. 34th St.

According to the Star Trek: Mission New York website, “The ceremony will include officials from the United States Postal Service as well as a special guest celebrity speaker. After the ceremony, fans are invited to visit the USPS booth on the main show floor where you can purchase these stamps, other official USPS merchandise and get an event exclusive cancelation stamp to commemorate the first day of issue!”

Adult tickets to the show on Friday are $55 each, according to the website.

The stamps will be issued nationwide on the day of issue.

The four Star Trek stamps are being issued in a pane of 20 that includes a header reading “Star Trek,” as well as the inscription “Space … The Final Frontier,” according to information published by the Postal Service in early August.

The stamps were designed by a Philadelphia, Pa., firm named The Heads of State. On its website, the design group noted: “We had the honor of creating this series of 4 commemorative postage stamps for the United States Postal Service. Live long, prosper, and send greeting cards.”

The USPS art director for this project was Antonio Alcala.

The four designs show symbolic images from the Star Trek universe, along with illustrations of the exterior of the starship USS Enterprise on three of the stamps.

The stamps do not picture scenes from episodes or identifiable characters who starred on the original television show or appeared in its many later incarnations and sequels, on TV and in motion pictures.

The Postal Service describes the new stamps as showcasing four digital illustrations inspired by elements of the classic program.

The first stamp shows the starship Enterprise, which carried the Starfleet crew of 430 led by Capt. James T. Kirk on its interstellar adventures. The ship is depicted inside the outline of the arching Starfleet insignia, against a gold background.

The Enterprise is shown from above against a green background on the third stamp.

The ship is represented as a black silhouette and appears to have an unidentified planet superimposed over the center of its saucer-shaped primary hull.

The final stamp features the hand gesture frequently used by Spock, the Vulcan science officer and second-in-command of the Enterprise. The gesture, or Vulcan salute, is often offered along with the spoken phrase “Live long and prosper.” Within the palm of the open-hand gesture is another image of the Enterprise, this time orbiting above a planet.

The series ended June 3, 1969, after three seasons, but was eventually followed by an animated series, several full-length films starring the TV series cast, and additional related series and films with different characters and casts, taking place in different eras.

The movie Star Trek, the first of three (to date) Star Trek films with the same original characters portrayed by a new cast (and taking place in an alternate timeline), appeared in 2009.

The enduring popularity of the Star Trek phenomenon was commemorated once before by the U.S. Postal Service, with a single 33¢ stamp issued in 1999 as part of the Celebrate the Century set for the decade of the 1960s (Scott 3188e). The stamp pictures the Enterprise in space with a planet below.

Another hugely popular space-themed entertainment franchise, Star Wars, was commemorated with a pane of 15 different stamps issued May 25, 2007 (Scott 4143). The Star Wars set includes likenesses of several living actors in their roles from the films, as illustrated by prominent entertainment artist Drew Struzan.

Along with the pane of 20 stamps available at post offices, the Postal Service will also offer the Star Trek set in press sheets consisting of six panes with die cuts (120 stamps) and selling for face value at $56.40.

Two pictorial first-day cancels will be offered. The black postmark has the outline of the Starfleet insignia, the words “Star Trek” in title lettering from the original series, and a pattern of rectangles resembling the lights seen on control panels on the bridge of the Enterprise.

The similar digital color postmark appears to be printed in shades of blue for the lettering and gold for background shapes, plus a depiction of the Enterprise in black instead of the insignia.

The digital color postmark is used primarily on uncacheted envelopes prepared and sold in a set of four by the Postal Service.

Technical details and first-day cancel ordering information for the Star Trek stamps can be found in the box on page 16.

Standard ordering instructions apply. Collectors requesting first-day cancels are encouraged to purchase their own stamps and affix them to envelopes. The first-day cover envelopes should be addressed for return (a removable label may be used), and mailed in a larger envelope addressed to Star Trek Stamps, Special Events Coordinator, 380 W. 33rd St., New York, NY 10199-9998. Requests for first-day cancels must be postmarked by Nov. 2.