How the BEP helped fill in production information gaps 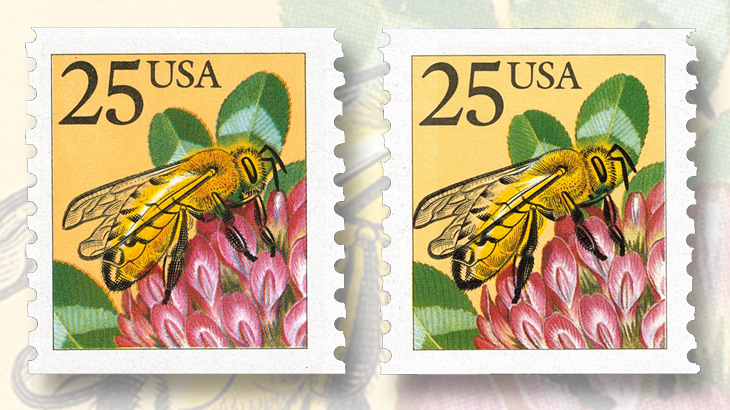 These two 1988 25¢ Honeybee coil stamps exhibit clearly different background yellows under “25USA”. At left is a darker, richer yellow than what is shown on the example on the right. The question is: Were these colors the result of different inks?

Expertizing tells us what a particular stamp or cover is or is not. But in many cases, there is a step beyond that finding, especially with regard to stamps: How was the stamp produced, and if there is a variation that has been noted, how did it happen?

Even if those explanations have no bearing on the stamp’s value, they may be important to the student of stamp printing, and they are surely important to understanding why even a minor variety may be collectible.

The explanation is rarely simple and may take the efforts of a printing professional to uncover. Thus, expertizing does not routinely include such explanations. Providing them (for an additional fee) might be an interesting way to expand the expertizing services on which we rely, but be careful what you wish for, as there would be significant problems to overcome.

In my experience, an expertizer schooled in production processes can probably diagnose 75 percent of what they see, at least to the point of defining alternatives. In other words, “It could be this, or it could be that.” But there is no help for the other 25 percent, except to ask the printer, “What happened?”

Was a different color of ink used? If so, that would have implications for catalog listings, for album makers and for collectors.

As an expertizer, my response is “probably not.” But despite being a student of stamp production, I couldn’t substantiate that opinion with specifics. So, in 1989, when I noticed this difference in stamps I had in my collection, l sent the stamps in to the Bureau of Engraving and Printing (BEP) for its thoughts.

Here, slightly abridged for considerations of space, is what the BEP had to say:

“In an attempt to determine if the color variation of the submitted stamps was an isolated occurrence, the Bureau collected a number of circulated stamps. After a thorough examination of both the submitted and collected stamps, it was determined that the color difference of the Honeybee stamps is a general trend. It was also noticed that the other colors of this particular stamp exhibit color differences, but do not necessarily become deeper colors as the yellow color deepens.

“Reflectance spectra obtained from the submitted and collated stamps from the arranged sets were compared. The spectra indicate that there are no significant differences in pigmentation. The difference, which is indicated by the spectra, is that stamps having the light yellow background have a higher reflectance value in the range of wavelengths used for the analysis.

“The submitted stamps represent normal color variations which resulted during the printing of this issue, and are, therefore, within the limits of BEP quality standards.”

The bottom line: The color variation is not the result of different inks, and while significant enough to be collectible, does not warrant catalog listing. I am really pleased to have the matter put to bed with no further debate needed.

Unfortunately, the United States Postal Service phased out the production of U.S. stamps at the BEP in the early years of this century, and all U.S. stamp production is now done by private contractors.

Part of the rules of the game nowadays is that the private contractors do not answer questions like this. Why? Well it would require extra effort if the contractors were to provide this service, and the cost of that effort would be passed along to the USPS in the form of a more expensive contract.

The Postal Service itself may be asked questions, but my experience is that it is not interested in providing explanations unless the question has wider implications than the effects on a single stamp issue.

So, I look back fondly on the good old days when the BEP actually took an interest in questions as a means to understand new varieties and to understand how its quality control had failed.

Over the course of my involvement in U.S. philately, I asked the Bureau many questions. Its responses comprise a small archive of information that exists nowhere else. I’ve also been able to add to that archive, thanks to the contributions of others who also asked questions and received responses.

Altogether, I have more than 50 BEP responses and have begun a process that will lead to posting them on the website of the Errors, Freaks and Oddities Collectors’ Club. As part of that process, I am asking all U.S. collectors who have this type of correspondence — be it with BEP or the USPS — to let me have copies of it to include in the posted archive.

If you can contribute one or more of these explanatory letters, I would appreciate your sending me a clear photocopy of both the request for an opinion and the response. You can send them to me as attachments to an email at jmhstamp@verizon.net, or as hard copy to Box 1125, Falls Church, VA 22041-0125.

BEP should consider loaning items to the National Postal Museum