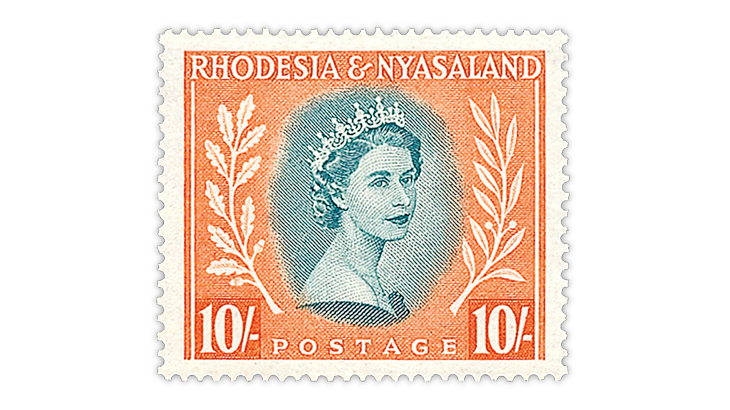 The Rhodesia and Nyasaland 1954-56 Queen Elizabeth II definitive series (Scott 141-155) is the key issue for this dead country.

The forces of decolonization brought the federation to an end after a little over 10 years on Dec. 31, 1963.

Northern Rhodesia would become the independent state of Zambia, while Nyasaland gained independence as Malawi.

Southern Rhodesia, with a significant white population, would resist black majority rule by unilaterally declaring independence in 1965. It would struggle with guerilla warfare and without de jure recognition from most of the world until supplanted by the Republic of Zimbabwe in 1980.

Rhodesia and Nyasaland’s main collector audience is collectors of British Africa. It only issued about 50 postage stamps and four postage due stamps.

The stamps have typical British colonial high design and production values. None of its stamps are prohibitively expensive. It makes a nice small country collection. It also fits the category of a dead country.

The first definitive issue of 1954-56 (Scott 141-155) is the key series. The higher denominated bicolor Queen Elizabeth II stamps are colorful, eye-catching and attractive.

The Scott Standard Postage Stamp Catalogue values the series in mint, never-hinged condition at $114.25. The series is a good buy in very fine grade at around $75.