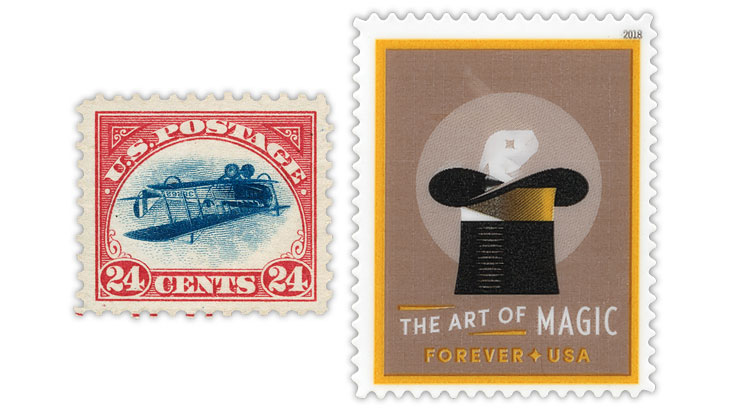 Among the items making headlines in Linn’s in 2018 were the Position 49 Jenny Invert error stamp and the printing innovations the Postal Service used on many stamps, including a lenticular version of the Magic commemorative stamp.

The year 2018 will soon come to a close — a year with a number of important stories involving stamps and the collector groups supporting the stamp hobby.

Among the many highlights of the year, the biggest standout in my book was the record result for a one-day stamp auction. On Oct. 3, Charles F. Shreve and Tracy L. Carey, in association with Robert A. Siegel Auction Galleries, conducted an auction of William H. Gross’ superlative collection of United States stamps and covers. The sale netted approximately $10 million. The sale of additional items from the Gross collection will continue into 2019, so I envision future headlines in the works.

The surprise reappearance and subsequent sale of the Position 49 Jenny Invert stamp also made top billing in late 2018. The stamp had been hidden away in a safe-deposit box for a century. The 1918 airmail error stamp (Scott C3a) was sold on Nov. 15 by Siegel for a record $1.593 million.

The U.S. Postal Service also made headlines throughout the year, both in Linn’s and in mainstream media outlets. The $1.50 Magic souvenir sheet of three stamps showing a rabbit coming out of a hat via a lenticular printing method captured the attention of collectors.

The Frozen Treats forever stamps, with a scratch-and-sniff feature, also intrigued postal patrons. Other innovative printing techniques included optically variable inks on the Statue of Freedom stamps, a sparkling reflective effect on the Bioluminescent Life stamps, and foil on the Dragons forever stamps.

I wouldn’t be surprised if a few stamp issues in 2019 showcase some other unusual printing techniques.

The Federal Duck Stamp Office cited “environmental hazards” in the production of moisture-activated gum as a reason for not finding a paper manufacturer in the United States. Collectors now only have the self-adhesive version to collect.

The duck stamp program also announced a big change for the stamp to be issued in 2019; the designs now must contain a hunting-related element in the scene. The winning design by Scot Storm includes a decoy and will be issued in June 2019.

The Vegas Liberty forever stamp from 2010 made headlines again in 2018. The stories this year were about the settlement with the sculptor whose photograph of the Las Vegas landmark was used without his permission. On June 29, a judge ordered the Postal Service to pay sculptor Robert S. Davidson $3.6 million. I somehow doubt that this story is over. If something new transpires, we will report on it.

In mid-2018, Linn’s completed a months-long project of redesigning both the weekly and monthly publications. Reader reaction was largely positive to both the cosmetic and editorial changes that took place. We are looking forward to an exciting editorial calendar for 2019. As always, we enjoy hearing from you if you have suggestions for future articles.

One of my favorite opportunities last year was getting the chance to look at astronaut Sally Ride’s stamp collection. While it was fun flipping through her stamp album, I enjoyed sharing that experience with our readers, too.

Another story in 2018 celebrated the 25th anniversary of the Smithsonian National Postal Museum. The feature article in the July 16 issue of Linn’s covered some of the museum’s major temporary exhibits from the last 25 years.

In late 2018, the U.S. Postal Service announced postage rate increases that include a letter-rate increase from 50¢ to 55¢. While that may be the most noticeable jump to the general public, those who mail first-class parcels will be more impacted by the zone- based set of rates, similar to how Priority Mail and other rates are structured now.

And lastly, the postmarking of mail, not only in the United States but also in New Zealand, was discussed in 2018.

New Zealand tested the possibility of not postmarking its mail. The result of the test was to resume canceling the mail, but doing it with a revised postmark.

In the United States, the Postal Service tested a new sprayed-on postmark that completely obliterates the stamp on the envelope. Also in the news were the bomb parcels franked with stamps, but uncanceled, sent in late October to prominent individuals.

Overall, 2018 was an interesting ride for philately. Here’s to keeping things going well for 2019. Happy New Year to all.