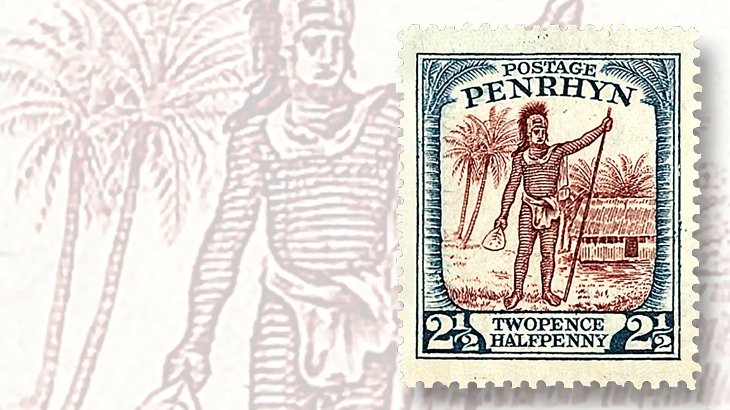 The Penrhyn Island 2½-penny Rarotongan Chief (Te Po) stamp (Scott 31) is popular with British Empire and classic stamp collectors and is a good buy in unused hinged condition in the $12-to-$15 price range.

British Empire stamps of the classic period (1840-1940) are perpetual favorites with many collectors. They often feature finely engraved designs, bright colors, and exotic and intriguing subjects.

Some collectors are ambitious enough to pursue the entire gamut of the empire, while others narrow their focus to an area, a colony, an omnibus issue, or a time period.

Penrhyn Island (a coral atoll also known as Tongareva) is in the northern group of the Cook Islands in the South Pacific. Penrhyn is Welsh for peninsula, which provides a whimsical geographical and linguistic juxtaposition.

The island was named for the Lady Penryhn, one of the 11 ships in the First Fleet, which transported convicts to New South Wales in 1787. The ship carried 101 female convicts and the first horses brought to Australia. The ship visited Penrhyn Island on the return voyage in 1788, and the captain named the island for his ship.

Penrhyn was annexed by Great Britain in 1888. Sovereignty was transferred to New Zealand in 1900. Today it has a population of fewer than 400 and is a self-governing island in free association with New Zealand.

Stamps were first issued for Penrhyn in 1902 by overprinting and surcharging stamps of New Zealand. In 1927, a 2½-penny Rarotongan Chief (Te Po) stamp (Scott 31) was issued. The stamp uses the same design as Cook Islands Scott 76, but it is inscribed “Penrhyn” instead of “Rarotonga.” The 2018 Scott Standard Postage Stamp Catalogue values the stamp at $17.50 in unused hinged condition. This is a popular stamp with an intriguing story and design, and it is a good buy at $12 to $15.