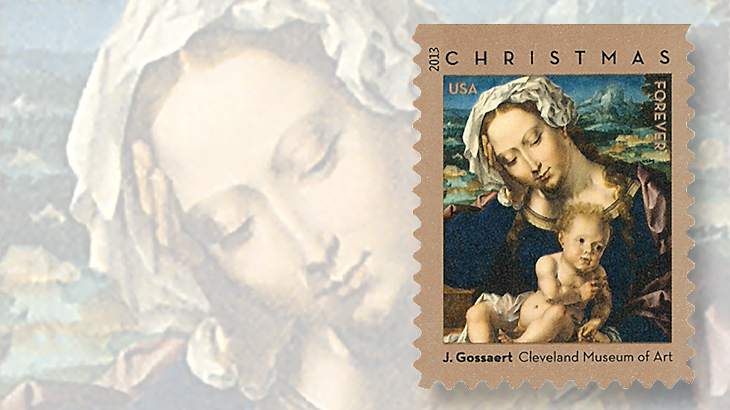 The 2013 Virgin and Child by Gossaert Christmas forever stamp. The United States Postal Service will offer existing religious-theme Christmas stamps at post offices this year, but it does not plan to issue a new stamp.

“The Postal Service has a long standing history of celebrating the religions of the world on postage stamps.”

Mark Saunders, the longtime spokesman for the United States Postal Service on matters of postage stamps, wrote those words in a Sept. 10 e-mail to Tucker Carlson, the founder and editor-in-chief of the Daily Caller, after the online news and opinion site published an article by reporter Richard Pollock titled, “Is The Postal Service Declaring War On Religion?”

The article by Pollock begins with the quote, “Don’t expect new Christmas stamps this year because for the first time in decades the U.S. Postal Service won’t issue a new stamp depicting any Christian religious figure or symbol. No baby Jesus. No Mary. And none of the three wise men.”

It is true that no new U.S. stamps with religious themes are planned this year. The Postal Service currently has three different traditional Christmas stamps showing religious scenes available for purchase in standard formats: the 2011 Madonna of the Candelabra Christmas forever stamp (Scott 4570), the 2013 Virgin and Child by Gossaert forever stamp (4815), and the 2012-13 Holy Family forever stamp (4813).

Apparently the Postal Service has a substantial backlog of Christmas stamps with religious subjects.

“We have more than a half billion religious-themed holiday stamps in inventory and based on prior year’s purchases, that’s more than twice sold during a typical Holiday season,” Saunders wrote in response to the article.

“Our decision to print select holiday-themed stamps every other year is a business decision based on supply and demand while serving the needs of our customers.”

In an August meeting with journalists at the American Philatelic Society’s Stampshow in Grand Rapids, Mich., the acting director of USPS Stamp Services, Mary-Anne Penner, confirmed that the Postal Service plans to issue some of its holiday stamps during alternating years.

The Daily Caller article states, “The first time Christmas was eliminated from the stamp collection was during Jimmy Carter’s term.

“In 1977, the Postal Service agreed to print a holiday period stamp honoring the Hopi Indian tribe by featuring a Hopi Pot.”

There was also a 13¢ Christmas stamp issued Oct. 21, 1977, showing Gen. George Washington kneeling in prayer, with the word “Christmas” inscribed at upper right.

The Daily Caller article later adds, “It has been uneven during Obama’s tenure, with the Madonna or the Nativity scene appearing in only two of his last six years. The last Madonna stamp was in 2011.”

The most recent year when Christmas came and went without a new holiday stamp reflecting a religious theme was 2005. At that time, however, many post offices offered the 2004 37¢ Madonna and Child by Lorenzo Monaco stamp (Scott 3879).

“Your Sept. 10 article ‘Is the Postal Service Declaring War on Religion?’ is incorrect and misleads your readers into thinking Post Offices will not be offering religious-themed holiday stamps this year,” Saunders wrote in his rebuttal letter.

“Nothing could be further from the truth.”