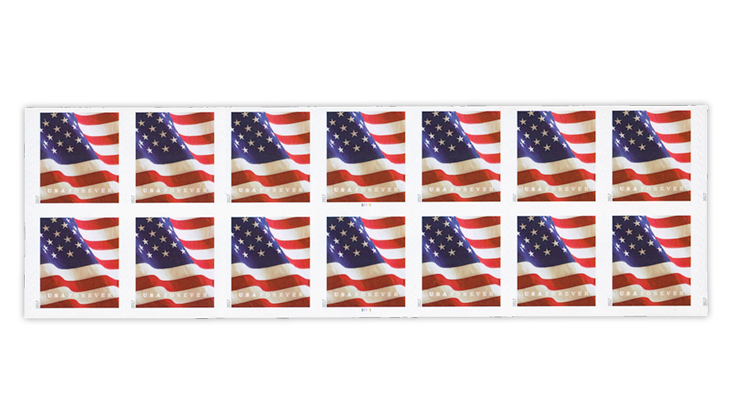 This block of two plate number strips of seven United States 2017 Flag coil stamps is missing the horizontal die-cut slits between the strips that would normally allow the two rolls from which the strips came to be separated. The new error, which was disc

This particular Flag coil (Scott 5158) was printed by Banknote Corporation of America and processed in “sticks” of rolls of 100 stamps each.

The term “stick” refers to a group of rolls, stacked one atop the other, that are physically connected. The number of rolls in a given stick can vary.

Horizontal die-cut slits in the margins between each strip of stamps in a roll allow individual rolls to be separated from the stick and sold separately at post offices.

Thompson said he purchased two connected rolls of Flag coil stamps on Aug. 4 from a seller on eBay who described them as follows: “Mint 2 Rolls Defective Uncut Postal Stamps. Shipped with USPS First Class. New never opened — rolls are unperforated (can’t separate) — individual stamps are unperforated in center. Missed machine that makes them [the rolls] separable. worked at USPS 20 years never seen anything like this.”

In the case of the new error, the horizontal slits between the two rolls are omitted, but each connected roll of stamps shows the normal vertical serpentine die cuts between each stamp in the two rolls.

Pictured is a block of two plate number strips of seven Flag coil stamps that lacks the horizontal slits between the strips that would normally allow the two rolls from which the strips came to be separated.

The fourth stamp in each strip bears plate number B1111, with the “B” prefix designating Banknote Corporation of America as the printer.

Thompson sent the block from the two connected rolls to Linn’s for examination. It is possible to obtain seven vertical pairs that are unslit between from this error multiple.

Scott catalog editor-in-chief Jay Bigalke said the new error will be listed as Scott 5158b, “Vert. pair, unslit between,” in the 2021 edition of the Scott Specialized Catalogue of United States Stamps and Covers that will be published in October.