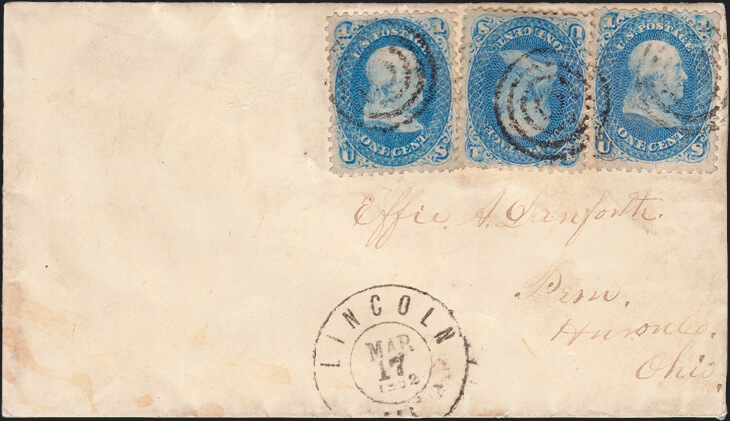 This unassuming cover from 1862, bearing three 1861 1¢ Benjamin Franklin stamps, has a secret, revealed in the second illustration. 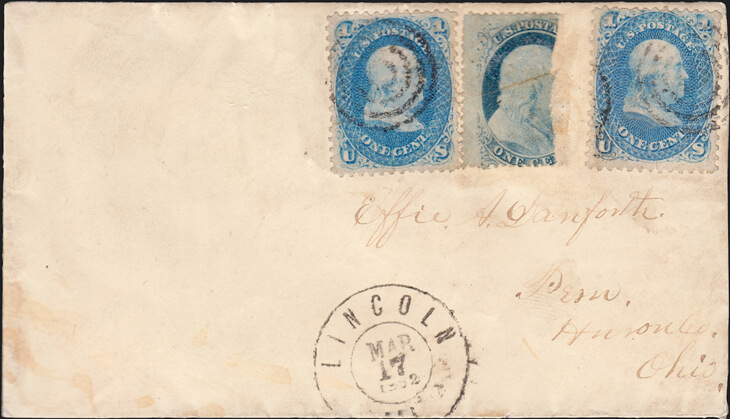 When the center stamp is removed from this March 17, 1862, Lincoln, Ill., cover, part of an uncanceled, demonetized 1¢ 1857 Franklin stamp is revealed. The postmaster apparently tried to remove it prior to applying a third 1¢ 1861 stamp upside down over the top of it, as seen in the first picture.
Previous
Next

Many collectors are aware of the early United States auxiliary marking that reads “Old Stamps Not Recognized.”

This highly desirable marking (and others similar to it) was applied to covers mailed after the late 1861 demonetization of all previous U.S. postage stamps due to the onset of the Civil War.

These markings called attention to the fact these stamps could no longer be used and, therefore, pointing out the need to apply valid postage or pay postage due.

Covers bearing these markings are highly coveted. But not all examples of this then-new form of illegal postage are as easily spotted.

When the Confederate States of America Post Office Department was established June 1, 1861, it was estimated that about $250,000 in United States postage stamps were still held by Southern postmasters.

The day after the war officially began (April 13, 1861), Confederate Postmaster General John H. Regan ordered all Southern postmasters to cease use of Union stamps and return all unused stamp stock to Washington, D.C.

Few heeded Regan’s orders, however, and U.S. Postmaster General Montgomery Blair, concerned over the potential financial implications of that much outstanding postage, made the decision to order a new set of stamps produced for use exclusively in the Union, thus demonetizing all earlier issues.

A new contract was let to the National Bank Note Co. for what is known as the 1861 series, with the first stamps to be available Aug. 19, 1861. The stamps were rushed into production and plans got underway for demonetizing our country’s stamps.

To facilitate rapid and widespread distribution of the new stamps and the demonetization of the old, Blair ordered new stamps to go to the largest cities first (Philadelphia was the first), offering postal patrons about a week after the new stamps went on sale to exchange their old stamps before they would no longer be recognized as valid.

This trickle-down approach was to be enacted throughout the country as soon as was practical. Thus, there are different dates in different states for ultimate demonetization, which was completed before the end of the year. With few known exceptions, the plan seemed to work fairly well.

So what’s with the cover shown in the first illustration? It does, after all, have three tied examples of the new 1¢ 1861 stamp, paying the then-current 3¢ letter rate, and was postmarked March 17, 1862, in Lincoln, Ill., a town named for our wood-splitting president years before he was elected (the first town to be named after him).

There are no other postal markings of any kind. A closer look reveals the center stamp is concealing a secret. When the stamp is carefully removed, an uncanceled, torn 1¢ 1857 stamp ( Scott 24) is revealed — as shown in the second picture. Again, not pretty at first glance (or even necessarily notable), unless one knows the story of demonetization.

It’s clear that the cover was presented to the postmaster with the invalid stamp (or stamps) and was promptly refused. There was even an attempt made to remove the offending stamp (somewhat unsuccessfully).

The partially removed, demonetized stamp was then covered with the upside-down 1¢ 1861 stamp, before all three stamps were tied with a concentric-circles cancellation and the letter sent on its way.

It is possible that other similar examples still exist.

It would be worthwhile to examine suspect covers under high-intensity light to see if invalidated treasure lurks beneath the surface.

Meanwhile, this intriguing cover is another example of the adage that not all that’s gold glitters.