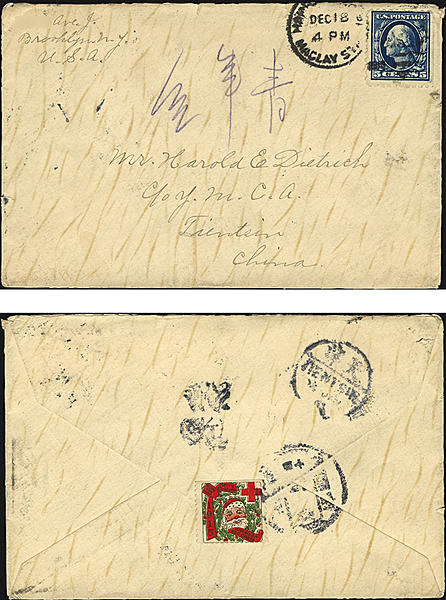 The preferred position for Christmas seals was on the back of envelopes and postcards, as shown on this letter sent from Brooklyn, N.Y., to Tientsin, China, in 1915. The seal is tied by a receiving cancel. 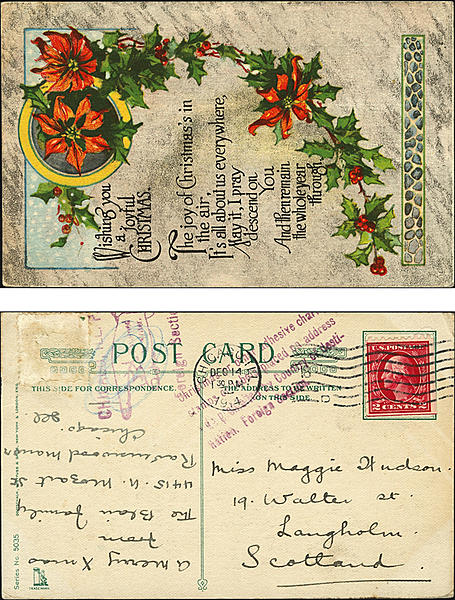 Sent to Scotland in 1914, this postcard was rejected because the receiving country had a rule that Christmas and other charity seals could not be placed on the front of mailpieces. After the postcard was returned to sender, the seal was removed and the postcard resent.

Who knew that certain countries refused to accept mail with Christmas seals placed on the front of the envelope or postcard?

Certainly not the sender of the postcard shown here.

Sent to Scotland, the postcard was returned to the sender in Chicago with this auxiliary marking handstamped in New York, N.Y.: “Christmas or other adhesive charity stamps are prohibited by country of destination.”

Often such cards would just go into the trash by way of the dead letter office because the sender did not put a return address on the card.

In this case, the Blair family’s address is present, upside down, on the message portion of the card.

Individual countries apparently made their wishes known to the United States Post Office Department prior to 1920. Germany was another such nation.

Then in 1920, the Universal Postal Union Convention held in Madrid, Spain, added a rule applying to all countries, saying Christmas stamps (seals) or other adhesive stamps or labels in aid of charitable objects must be affixed to the back of mailed articles and not on the address side.

The odd thing that I have noticed is that a large number of post-1922 usages of Christmas seals on postcards and letters going abroad have the seal on the front, and I have seen not a single such usage being returned as unmailable.

That leads me to pose a challenge to U.S. Stamp Notes readers.

Can anyone report a mailpiece rejected after Jan. 1, 1922, because of charity seals placed on the front?

A nice example of proper placement is the 1915 usage on the reverse of the cover shown here. Note that the seal is tied by a Chinese receiving cancel.

The cover originated in Brooklyn, N.Y., and was sent to Tientsin, China.