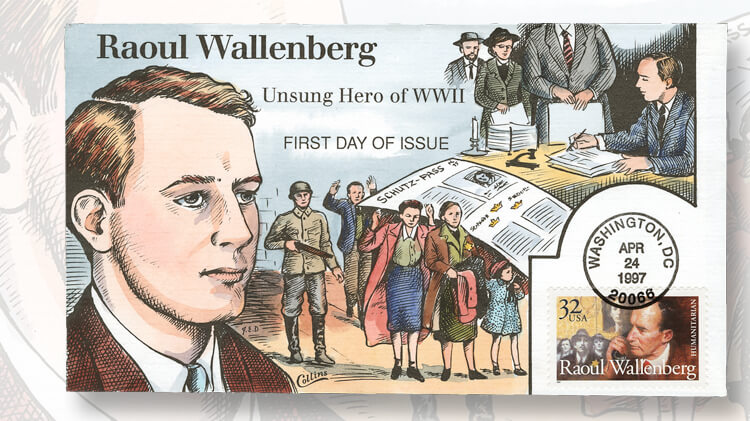 This handpainted first-day cover by Linda and Fred Collins is a fitting memorial to Raoul Wallenberg, whose efforts in Budapest, Hungary, on behalf of the Swedish government during World War II saved thousands of Jews from extermination. Wallenberg was given honorary United States citizenship by Congress in 1981, and the U.S. stamp honoring him was issued April 24, 1997.

In my Linn’s column of April 29, 1991, I called for the issuance of a United States stamp to honor Raoul Wallenberg in 1995, the 50th anniversary of his disappearance. I’m sure I was not the only person requesting such a stamp.

A 32¢ commemorative was finally issued April 24, 1997. A beautifully done first-day cover for the stamp is shown nearby.

At the time of issuance, much was known of Wallenberg’s heroism, but little was known of his last years and his death.

He came to prominence as a figure in world history in 1944 when, as a 32-year-old diplomat, he was appointed as an attache in the Swedish mission in Budapest.

In that job, he spent the next year risking his life to save Hungarian Jews from the Nazis. He saved thousands by hiding them in homes he acquired on behalf of the Swedish crown. On the homes, he hung Swedish flags. He also issued false passports and identification papers to Jews who had been identified for deportation.

He was known to walk into groups of Nazis rounding up Jews to save individuals, and even took Jews from trains destined for concentration camps.

For his heroism, Wallenberg should have been honored after the war. In the West, he was. Unfortunately, he was not able to receive the honors because he was missing.

On Jan. 17, 1945, Wallenberg went out from Budapest to meet the oncoming Soviet troops. It was the last time he was seen.

While it was clear that the Soviets had detained him, the U.S. and Swedish governments, despite considerable effort, could get no reliable information from the Soviets about Wallenberg’s fate.

For 12 years after his arrest, the Soviets didn’t even acknowledge that they had taken him. After that they acknowledged the obvious, but claimed that he died of a heart attack in 1947. Sweden and the United States continued to demand an accounting.

In 1989, the Soviets called the detention of Wallenberg a “tragic mistake”, but provided no additional detail about his fate.

The end of the story can now be told, courtesy of the granddaughter of Ivan A. Serov, the head of the Soviet KGB from 1954 to 1958.

In 2012, Vera Serova found her grandfather’s diaries secreted in the wall of a country house she inherited from him. The diaries were published in 2016 in Notes from a Suitcase: Secret Diaries of the First KGB Chairman, Found Over 25 Years after His Death, and in them Serov had made clear, “I have no doubts that Wallenberg was liquidated in 1947.”

Serov said that he was ordered by Stalin’s successor Nikita Khrushchev to investigate what happened to Wallenberg. A half-dozen pages of his diary are devoted to his efforts, and the bottom line is that Stalin ordered the murder.

It is assumed that relevant documents still exist in KGB files, now managed by the FSB, which replaced the KGB after the downfall of the Soviet Union in 1991. Here we are, more than 72 years after Wallenberg disappeared, and those documents have not been released.