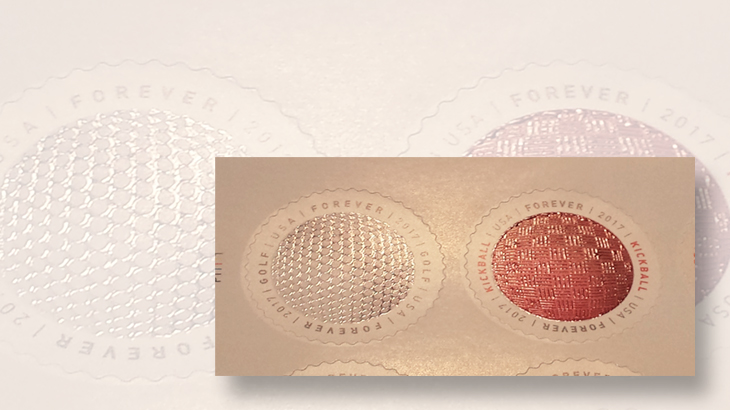 Angled lighting reflects off distinctive coating patterns on the Have a Ball! forever stamp issue from the United States Postal Service. The special coating adds texture to the surface of each stamp in the eight-stamp set issued June 14. 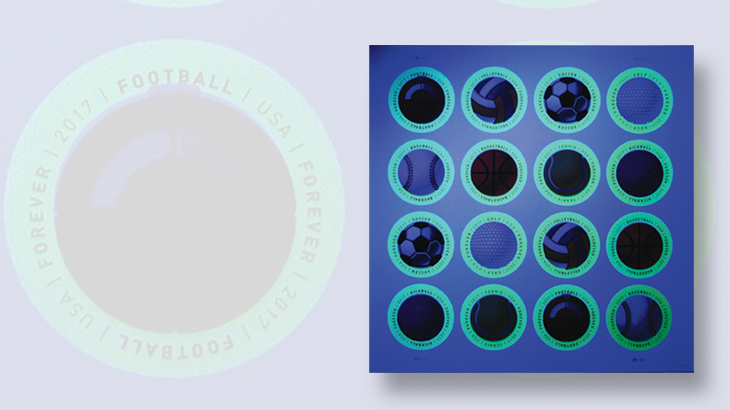 Under shortwave ultraviolet light, tagging encircling the 16 stamps on the Have a Ball! pane glows yellow-green. The chemical application triggers equipment on mail-sorting machinery. 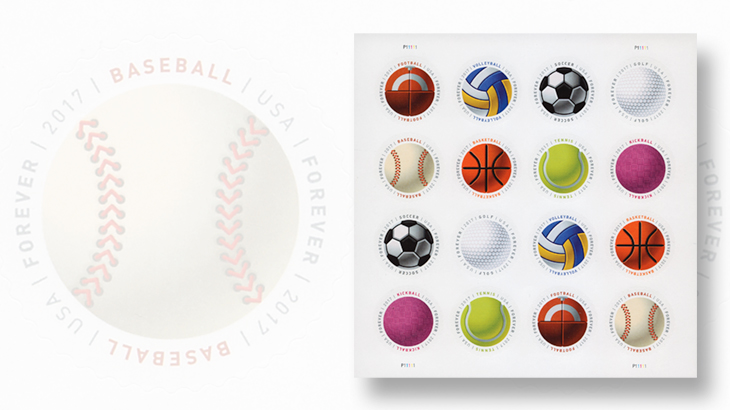 The new pane of 16 Have a Ball! forever stamps from the United States Postal Service, under normal lighting conditions.
Previous
Next

Eight new round forever stamps showing different sports balls were issued with an 8 a.m. ceremony June 14 in Hartford, Wis. The stamp event was held in association with the 2017 U.S. Open Championship, one of professional golf’s premier championship competitions.

A singularly designed coating is applied to each stamp in the set, adding a surface texture to mimic characteristics such as the dimples on the golf ball, the stitching on the baseball, and the raised pattern of alternating line groups on the pink playground kickball.

The effect is both visual and tactile, as the glossy coating can be viewed when the stamps are held at a slight angle, and the raised textures can be felt with the fingers.

The round stamps also have an unusual spot tagging that encircles the round design of each ball, causing only the frame of the stamp to glow yellow green when exposed to ultraviolet light.

In high-speed mail sorting equipment, the luminescent tagging makes it possible for the machinery to locate the stamp on the envelope, properly position the envelope, and apply the postmark so it will strike the stamp.

Tagging applied in a shape is unusual, but has been used before on other U.S. stamps, such as the four American Glass stamps issued in 1999 (Scott 3325-3328). More commonly, tagging simply covers the entire surface of the stamp design.

The Have a Ball! pane of 16 forever stamps was placed on sale June 14 at U.S. post offices nationwide.

Here’s all you need to know about second U.S. stamp for Henry David Thoreau