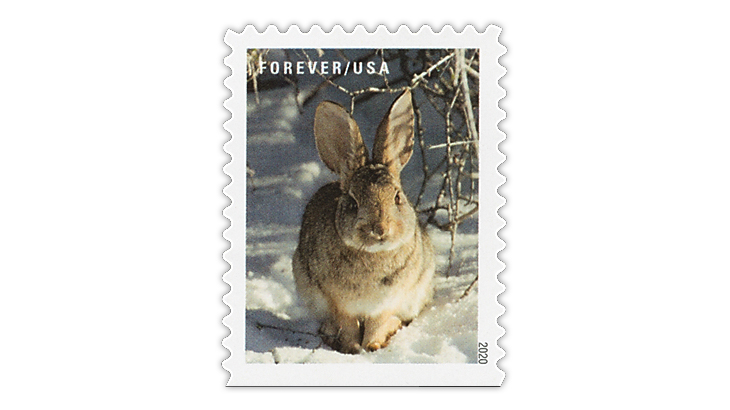 The cartoon caption contest image for February is the Rabbit stamp from the 2020 Winter Scenes set of 10. Entries must be received by Feb. 25 for a chance to win a prize.

Wildlife in my Washington, D.C., suburb seems to include the normal range of chipmunks, squirrels, birds (including geese at this time of year) and stray cats. I even see the occasional fox and deer.

We also seem to have a significant population of rabbits. And the rabbit on the 2020 Winter Scenes stamp (Scott 5539) looks like the natives I see in my garden most days.

This forever stamp will be the cartoon caption contest stamp for February. So far as I am aware, this stamp marks the third appearance of a wild rabbit on U.S. stamps. The first two were on 22¢ stamps (Scott 2290, 2305) in the 1987 North American Wildlife pane of 50.

I am, of course, not counting Bugs Bunny who, despite television appearances, has never been seen in my garden. I also am not counting other fictional rabbits, symbolic rabbits and tame bunnies that have appeared on U.S. stamps.

However just three months after the U.S. Postal Service released the Winter Scenes stamps on Oct. 16, 2020, it issued a nondenominated additional-ounce Brush Rabbit stamp in panes of 20 (5544) and coils of 100 (5545).

The cartoon contest stamp shows a photograph of a cottontail rabbit in the snow. This rabbit seems poised to say something, and I wonder what?

Your task is to imagine yourself in the rabbit’s fur and tell me what you think he might be thinking or saying about his errands, his place in the animal hierarchy, the humans he comes in contact with or runs away from, politics, stamp collecting or whatever else comes to mind.

Entries must reach me no later than Feb. 25.