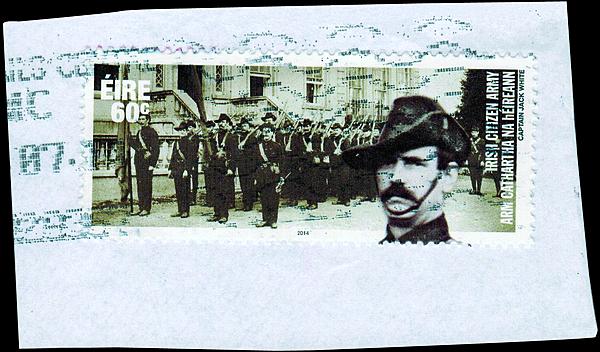 A used example of a withdrawn Irish Citizen Army stamp has been discovered in kiloware.

Ireland’s An Post withdrew the €0.60 commemorative on its Jan. 23 first day of issue because of a controversy over the design. The stamp was supposed to show Irish Citizen Army cofounder Capt. Jack White in the foreground, but questions were raised as to whether or not it was White who was depicted (Linn’s, Feb. 17, page 1).

A few mint examples, including a pane of 15, were reported almost immediately after the stamp was withdrawn.

In mid-November, Linn’s learned that Theresa Young of Port Saint Lucie, Fla., had found a used example while sorting through a small batch of kiloware.

Young, who is a member of the Eire Philatelic Association, wrote to Linn’s: “I thought others might be interested to know there might be a few postally used copies. According to Liam Malone, editor of the EPA’s Revealer, there was a rumor that a few copies were used to pay bills in Cork.”

The example Young found is still on piece with part of the sprayed-on cancellation shown at left. It appears to have been processed at one of Ireland’s four mailing centers in July.

Young told Linn’s that the kiloware was from an Australian dealer, Kevin Morgan, who said that the batch the stamp was found in had originated in Great Britain.

Young added that she has no plans to sell the stamp.

“I am just delighted that I’ll be able to have a complete, fine used collection of the Irish Republic,” she said.

Other used examples exist, according to O’Shea. He told Linn’s that he has been informed about three other examples of the withdrawn stamp found in kiloware.

He also said that a person who had purchased a sheet of the stamps mailed a cover franked with the issue and that he had a block of four canceled as well.
O’Shea added, “I am aware of one local post office where there were a number of these stamps sold to pensioners who in turn I am sure would have used them on letters.”

As for the popularity of the stamp, he said that it had “certainly caught the eye of the general public in Ireland.”

The Scott Standard Postage Stamp Catalogue lists the stamp as Ireland Scott 2021. In place of a catalog value, there are dashes indicating that information is lacking or insufficient to establish a usable catalog value.

A new version of the stamp without the portrait in the foreground was issued April 17 (Scott 2029).