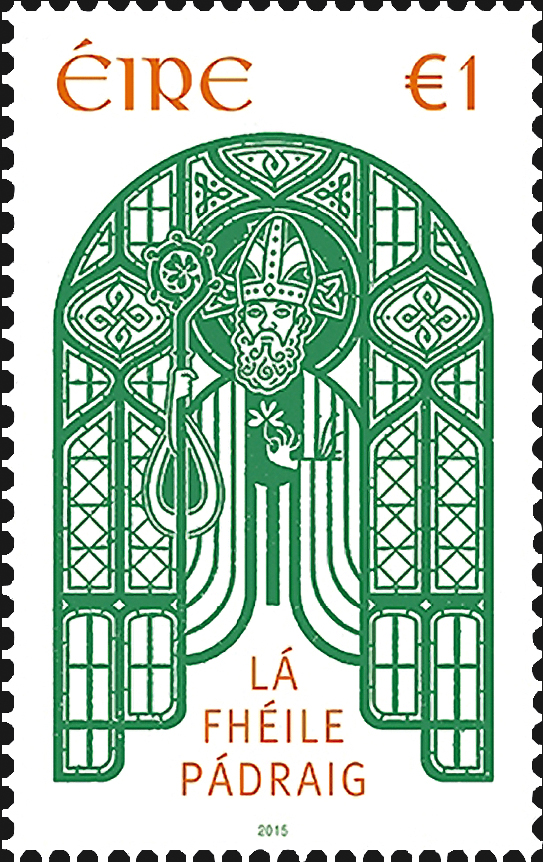 The design of a new St. Patrick’s Day stamp from Ireland is modeled after the first definitive issue of 1922-23. 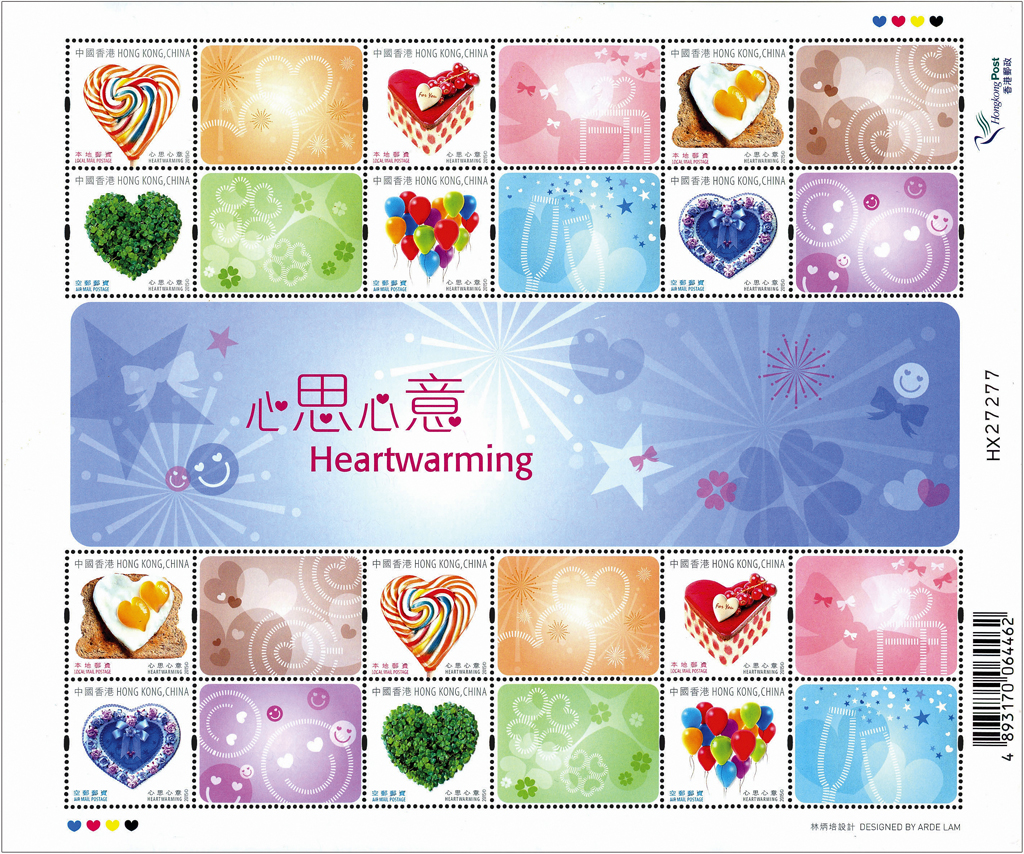 Hong Kong’s latest Heartwarming stamps are included in one pane of 12 with se-tenant labels. 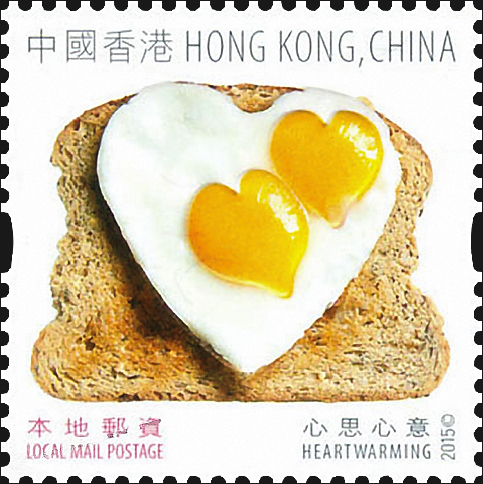 A Heartwarming stamp from Hong Kong showing a heart-shaped egg with two similarly shaped yokes represents a “harmonious and happy life,” according to Hong Kong Post. 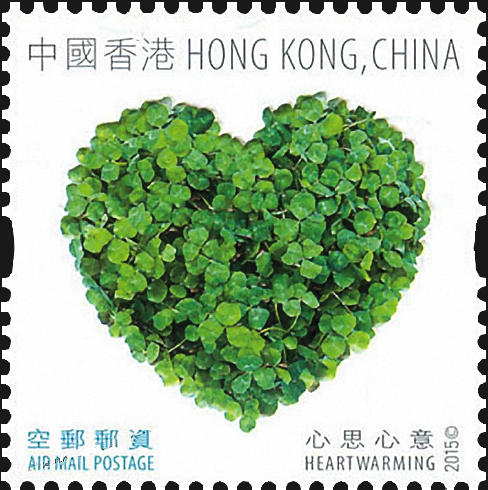 A cluster of clover forms a heart on this stamp issued Feb. 12 by Hong Kong Post. 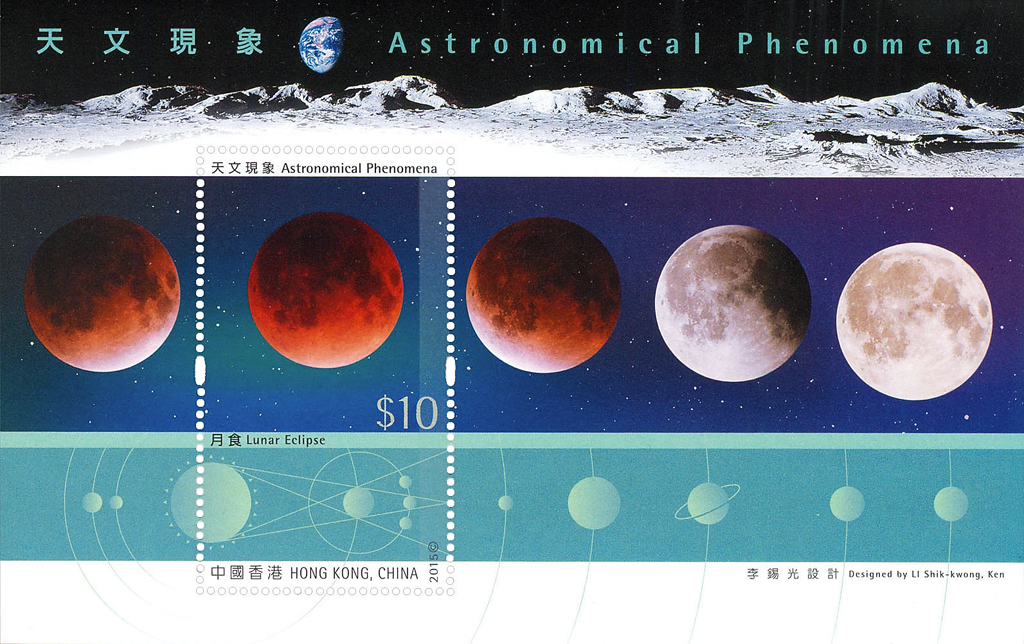 Six se-tenant stamps from Hong Kong show a solar eclipse, a meteor shower, a comet, the rings of Saturn, sunspots and a moon-planet conjunction. These Astronomical Phenomena stamps were issued March 17 by Hong Kong Post.

In announcing the Astronomical Phenomena issue, Hong Kong Post said: “The universe has inspired awe and wonder in mankind for eons. In the old days, stars could only be observed by the naked eye. Nowadays, technology has helped us to explore the boundless universe and unveil the secrets of outer space.”

Six of the stamps are se-tenant (side-by-side) in a strip. Two other stamps are in separate souvenir sheets.

The first stamp in the strip shows a solar eclipse, while a lunar eclipse is illustrated on the souvenir sheets.

One souvenir sheet contains a single $10 stamp, with different images of the eclipse illustrated in the selvage. Another souvenir sheet includes a $20 stamp, printed with a holographic 3D foil to give the moon a realistic appearance.

The sun and moon also are the subject of two other stamps in this Astronomical Phenomena issue.

The $3.70 stamp, located second from the right in the strip, shows sunspots.

These dark-appearing spots were observed and recorded as early as the 300 B.C. by the ancient Chinese.

Dennis Overbye, in a Feb. 4 article in The New York Times titled “Living With a Star,” wrote: “So-called sunspots, which look dark only compared with the brilliance of the disk around them, occur in some regions where intense magnetic fields choke off the rising energy. They wax and wane in concert with the sun’s magnetic field, which reverses its direction every 11 years … ”

The $5 stamp on the far right is inscribed “moon-planet conjunction.” According to Hong Kong Post, this occurs when the moon appears to be very close to the Earth or another planet.

Hong Kong Post also said, “A Moon-planet conjunction may form an interesting pattern such as the ‘smiley face’ in the stamp.

According to NASA, these rings are made up of billions of particles, ranging in size from “tiny, dust-sized icy grains” to mountains.

Although the stamp is inscribed “Saturn’s ring tilt variation,” the rings actually don’t vary in the angle they orbit  around Saturn. The seeming variation is caused by the length of time it takes the Earth and Saturn around the sun, one year as opposed to almost 30.

A meteor shower, sometimes referred to as nature’s fireworks, is illustrated on the $2.20 stamp.

In most meteor showers, the meteoroids are remnants of comets. NASA calls comets “cosmic snowballs of frozen gases, rock and dust,” adding that they can be the size of a small town. The $2.90 stamp depicts a comet.

Ken Li Shik-kwong designed the stamps, and Joh. Enschede of the Netherlands printed them. They were issued March 17.

More than a month earlier, on Feb. 12, Hong Kong released a set of six stamps for Valentine’s Day.

In this latest addition to the Heartwarming series, all of the stamps show objects modeled or arranged into the shape of a heart.

For example, one design depicts a heart formed by a cluster of four-leaf clovers. This stamp is nondenominated, inscribed “airmail postage” in place of the denomination.

The two other airmail postage stamps in the Heartwarming set show colorful balloons arranged in the shape of a heart and a heart-shaped photo frame decorated with a bow and roses.

The other three stamps are inscribed “local mail postage,” and all feature designs with food.

One stamp shows an egg and toast. Hong Kong Post explains the Valentine connection, “The heart-shaped double yolk, sunny side up egg on the bread depicts a harmonious and happy life.”

Arde Lam designed the stamps. Cartor Security Printing printed them by offset, plus embossing, in panes of 25. In addition, a pane of 12 stamps (two of each design) includes 12 se-tenant labels, and the stamps were printed with blank labels that can be personalized.

According to information from Ireland’s An Post, the design of this 1 stamp was created in the style of Ireland’s first definitives of 1922 and 1923. The four designs show the sword of light, a map of Ireland, the arms of the four historic provinces of Ireland and the cross of Cong, all surrounded by symbolic ornamentation.

The new St. Patrick’s Day stamp features the saint as a bishop with a crosier in one hand and a shamrock in the other. Another shamrock is pictured in the curved top of the staff.

Steve Simpson designed the stamp. Cartor Security Printers printed it by offset in sheets of 16. The printing quantity was 116,000.