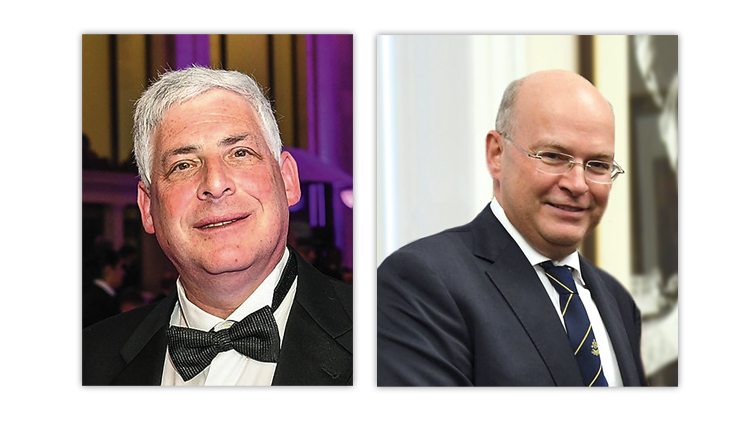 The Collectors Club has announced that Mark Banchik and Patrick Maselis will receive the 2021 Alfred F. Lichtenstein Memorial award for distinguished service to philately.

Banchik’s collecting bug was never far from the surface, and it re-emerged after a period of living and studying in Mexico.

Upon his return to New York in the early 1980s, Banchik began concentrating on Mexico. The firsthand experiences of his landlord and neighbors in Mexico with the United States interventions and revolutionary-era events around 1914 had inspired Banchik’s 1914-era exhibit. This was followed by collections centered on earlier events and the United States westward expansion.

Volunteering, mentoring and giving back are ways Banchik hopes to recognize the many individuals who have helped guide him. His fervent wish is to repay those who helped him by building the framework to allow future collectors and philatelic leaders to thrive.

When it comes to philately, Maselis is passionate about sharing his talents and visions worldwide. Maselis is the world’s leading collector and scholar of Belgium, its colonies and the Free State of Congo.

He is a large-gold-medal-winning international exhibitor, researcher, author of many books and articles, and a gifted speaker.

Maselis is a philanthropist who likes to make quiet differences to affect the future of the hobby. He has sponsored international trips for promising young philatelists, including the Young Philatelic Leaders Fellowship of the American Philatelic Society.

He organizes international gatherings and dinners of fellow collectors to share the joy of stamps and postal history and ensure the future connections that are vital to sustaining the hobby.

Alfred F. Lichtenstein (1876-1947) was widely considered one of the greatest American philatelists of the first half of the 20th century.

The award in his memory was established by the Collectors Club in 1952, and its first recipient was Lichtenstein’s good friend and co-founder of the Philatelic Foundation, Theodore Steinway. In past years, the award has been given to a single recipient.

Traditionally the Lichtenstein award is formally presented at a springtime dinner in New York City, but due to the continuing global COVID-19 pandemic, plans for a dinner this year have not yet been finalized. Last year’s dinner honoring the 2020 recipient, John Barwis, was canceled.