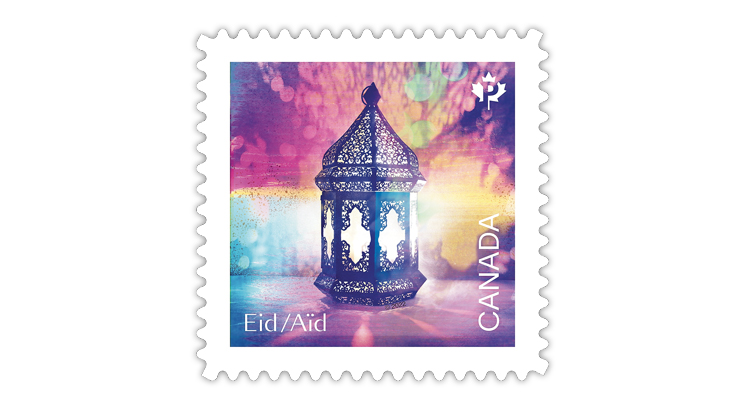 Canada Post issued a stamp on April 12 marking Eid al-Fitr and Eid al-Adha, the two most important festivals in the Islamic calendar.

This nondenominated permanent-rate (currently 92¢) Eid stamp is sold in booklets of six.

The stamp shows an illuminated Eid lantern with light pouring out from pierced designs. According to Canada Post, these ornamental lanterns are called fanous, and they carry special meaning for the festivals of Eid al-Fitr and Eid al-Adha.

In its Details magazine for collectors, Canada Post explained that these lanterns, lit in homes, mosques and businesses during Eid, are symbols of hope and guidance.

“In Islam, one of the names given to God is Al-Nur, which means “the Light” — and Eid lanterns often contain inscriptions from the Verse of Light (Ayat al-Nur) in the holy Qur’an (24:35),” Canada Post said.

One of the common inscriptions on Eid lanterns translates to “light upon light,” and this phrase is “a reference to God’s light illuminating heaven and earth as divine guidance for all humankind,” according to Canada Post.

Eid al-Fitr, which translates to “the festival of breaking the fast,” marks the end of the month-long Ramadan fast. This year Eid al-Fitr is scheduled to begin in early May as the signal for the end of Ramadan.

Eid al-Adha, the “festival of sacrifice,” commemorates Abraham’s willingness to sacrifice his son as an act of obedience to God. This year Eid al-Adha is scheduled to begin in early July.

Eid al-Adha also marks the end of the Hajj pilgrimage to the Kaaba in Mecca, Saudi Arabia. The Kaaba is the most sacred site in Islam.

The new Eid stamp was designed by Soapbox Designs using art by Richard Nalli-Petta. The stamp measures 24 millimeters by 24mm. It was printed by Lowe-Martin in booklets of 6 (product no. 414184111) using five-color lithography. A total of 100,000 booklets of six were produced.