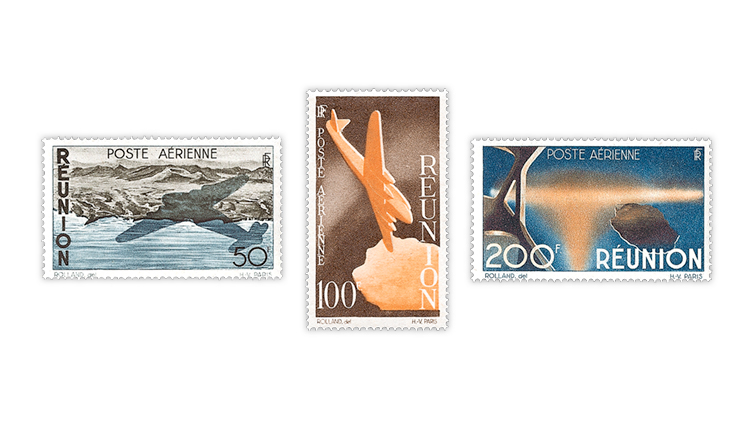 The airmail set of three stamps issued March 24, 1947, is one of the most colorful and attractive of Reunion’s French colonial issues.

Reunion is a large volcanic island in the Indian Ocean 109 miles southwest of Mauritius and 590 miles east of Madagascar.

It was uninhabited when it was discovered by the Portuguese in the 16th century. Colonization began in the 17th century, and today the island is home to more than 869,000 people.

Reunion was originally named Ile de Bourbon for the French royal dynasty. During the French Revolution, the name was changed to Reunion (which means “assembly” in French). It was briefly renamed Bonaparte in 1806 and then reverted to Bourbon in 1810.

With the overthrow of King Louis Philippe I of France in 1848, the name was permanently changed back to Reunion. Today Reunion is an overseas department and region of France.

Reunion issued its own stamps from 1852 until Jan. 1, 1975, when they were superseded by the stamps of France. Stamps of Reunion are popular with collectors of France and area.

One of the most colorful and attractive Reunion issues is the airmail set of three stamps (Scott C32-C34) issued March 24, 1947. The Scott Standard Postage Stamp Catalogue values the set at $49 in mint, never-hinged condition.

The set is a bit overvalued in the catalog and is a good buy in mint, never-hinged condition at around $25. A lightly hinged set would be a good buy at about $15.