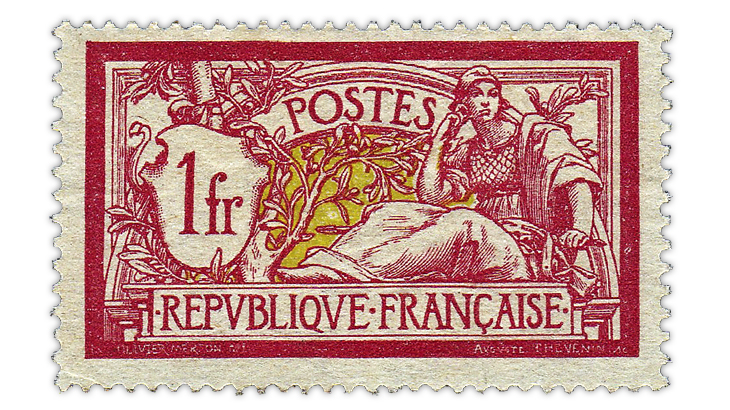 In Philately of France in the June 21 issue of Linn’s Stamp News, Larry Rosenblum reviews the fascinating 30-year history of the Liberty and Peace series featuring the female allegory of the French Republic.

The June 21 monthly issue of Linn’s Stamp News just landed on the presses and goes in the mail to subscribers Monday, June 7. And if you subscribe to Linn’s digital edition, you’re at the head of the line with early access Saturday, June 5. While you wait for your issue to arrive in your mailbox, enjoy these three brief summaries of exclusive content available only to subscribers.

A tribute to France’s Liberty and Peace series

Larry Rosenblum opens his Philately of France column thus: “The Liberty and Peace series, commonly known as Type Merson after its designer, Luc-Olivier Merson, represents numerous firsts for France: the first bicolor stamps, the first large stamps for everyday use, the first airmail stamps, and the first stamps to symbolize France as a peaceful republic willing to defend itself.” Also known as Type Merson, the Liberty and Peace series grew out of a desire for new stamps to replace the Peace and Commerce series. Merson and two other artists were commissioned to produce designs for a new series. As good fortune would have it, Merson was assigned the high values. “The Merson design fared the best of the three. As postage rates soared during the inflation of the mid-1920s, the high values of 1900 became everyday rates, especially for mail going overseas. All of the original denominations lasted into the 1920s with one lasting to 1931,” Rosenblum explains. There’s much more to learn about these impressive stamps, so be sure to read the entire column.

The recent sale of a comprehensive collection of British railway letter stamps and postal history formed by Stuart Phillips provides Great Britain Philately columnist Matthew Healey with valuable insights into the development and use of these stamps designed to combine the postage charge and railway fee. “The collection traced the development of the railway letter service from its earliest days [in the early 1890s] until it petered out around the time of World War II,” Healey writes. He goes on to explore railway letter stamps via key items in the sale of the Phillips collection, including a splendid cover franked with a 2-penny Midland Railway stamp that was sent by rail Jan. 31, 1891, one day before the official launch of railway letter service on Feb. 1, 1891. This cover is therefore an earliest-known use, or EKU, of a railway letter stamp. Another railway letter cover illustrated in the column is addressed to a Mr. A. Wilson of Manchester. Healey reveals that numerous surviving railway letter covers are addressed to Wilson. Why might this be? You will find the answer and much more in Healey’s engaging review.

In a captivating feature article, Clete Delvaux pays philatelic tribute to three men named Alexandre Dumas. The first, known as grandpere (grandfather) Alexandre Dumas, would go on to achieve recognition as a general in Napoleon’s army. His son, Alexandre Dumas pere (father) eventually achieved fame as the author of The Three Musketeers and The Count of Monte Cristo. Dumas pere’s son, Alexandre Dumas fils (son), became a successful playwright. His best-known work, The Lady of the Camillas, was a success that “inspired Giuseppi Verdi to set the story to music. His work became the 1853 opera La Traviata. The role of the tragic Marguerite Gautier became one of the most coveted among actresses, portrayed by Sarah Bernhardt, Eleonora Duse, Lillian Gish and others,” according to Delvaux. His column is richly illustrated with an array of colorful stamps from Haiti, France, Romania, Mozambique and Liechtenstein that celebrate the lives of this extraordinary trio. This is a read you won’t want to miss.