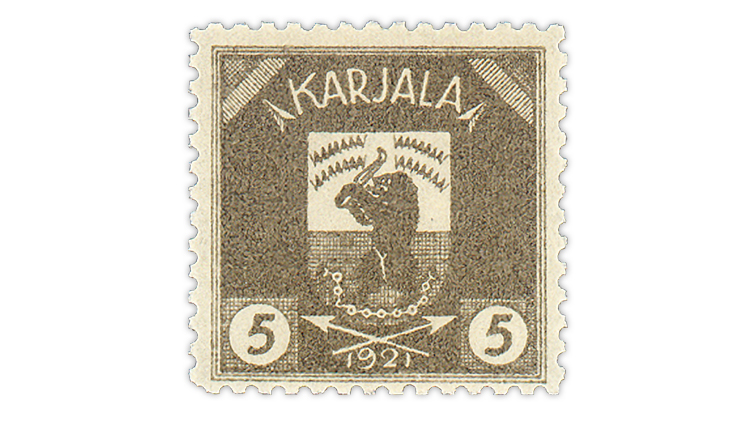 Karelia is one seven dead countries that Rick Miller highlights in his Stamps of Eastern Europe column in the Jan. 27 issue of Linn’s Stamp News. Shown is a 1922 5-penni stamp from Karelia featuring the national coat of arms. All 15 of Karelia’s governmen

The Jan. 27 issue of Linn’s Stamp News just landed on the presses and goes in the mail to subscribers Monday, Jan. 13. And if you subscribe to Linn’s digital edition, you’re at the head of the line with early access Saturday, Jan. 11. Here we entice you with three brief reviews of exclusive content available only to subscribers.

Picking up where he left off in the Dec. 23, 2019, issue of Linn’s Stamp News, Stamps of Eastern Europe columnist Rick Miller concludes his two-part series examining stamps from dead countries. Miller begins his review with Karelia, a border province between Finland and Russia. Collectors call the 15 stamps issued in 1922 by the Karelian government the Golfing Bears. The other highlighted dead countries are the Kingdom of Serbs, Croats and Slovenes (Yugoslavia), Memel, South Russia, the Transcaucasian Socialist Federative Soviet Republic, the Soviet Union and Western Ukraine.

James E. Lee, in Essays and Proofs, provides a useful primer on die proofs, which are impressions of completed stamp designs. Lee uses five beautiful die proofs of 19th-century United States stamps to explain key aspects of their production and identification. Lee concludes by observing that die proofs “are an excellent addition to any single-stamp collection.” Read the entire column to see if you agree.

In each weekly issue of Linn’s, either E. Rawolik VI or E. Rawolik VII dissects the contents of a stamp mixture offered to collectors. E. Rawolik is a pseudonym that is also the word “kiloware” (a stamp mixture) spelled backward. This week, E. Rawolik VII examines half of a mixture of 120 stamps and is pleased to find stamps from 34 countries. Close to half of the stamps have a Scott catalog value of $1 or more.