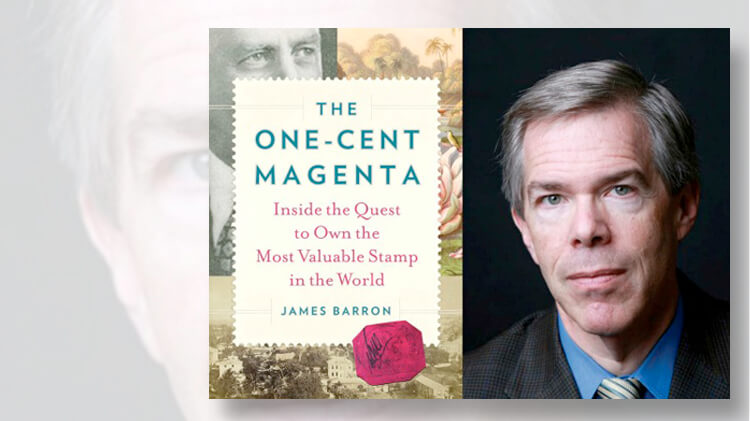 The 14th Maynard Sundman lecture, to be presented Sept. 21 at the National Postal Museum, features James Barron, a 40-year veteran of The New York Times and author of The One-Cent Magenta: Inside the Quest to Own the Most Valuable Stamp in the World.

James Barron, author of The One-Cent Magenta: Inside the Quest to Own the Most Valuable Stamp in the World, will deliver the 14th Maynard Sundman lecture Sept. 21 at the Smithsonian National Postal Museum in Washington, D.C.

Barron’s one-hour talk, titled “James Barron The One-Cent Magenta,” begins at noon at the museum, located at 2 Massachusetts Ave. NW in Washington, D.C. Admission to the museum is free.

“James Barron delivers a fascinating tale of global history and immense wealth, and of the human desire to collect,” the museum announced in a press release Linn’s received Sept. 7.

Attendees may also get an up-close look at the iconic stamp, which is on display at the museum until November 2017, courtesy of its current owner, renowned shoe designer and philanthropist Stuart Weitzman.

Barron also will participate in History After Hours, to be held Sept. 21 from 6 p.m. to 8 p.m. in the museum’s Historic Lobby. Admission to this event is free, but registration is required.

A “complimentary bar and light refreshements” will be available, according to the museum. Barron’s talk is scheduled to begin at 6:20 p.m.

“A book signing will follow Mr. Barron’s remarks, and his publication ‘The One-Cent Magenta ...’ will be available for purchase at the Museum Store,” the museum said.

In 2002, David and Donald Sundman established the Maynard Sundman Lecture Series in honor of their father.