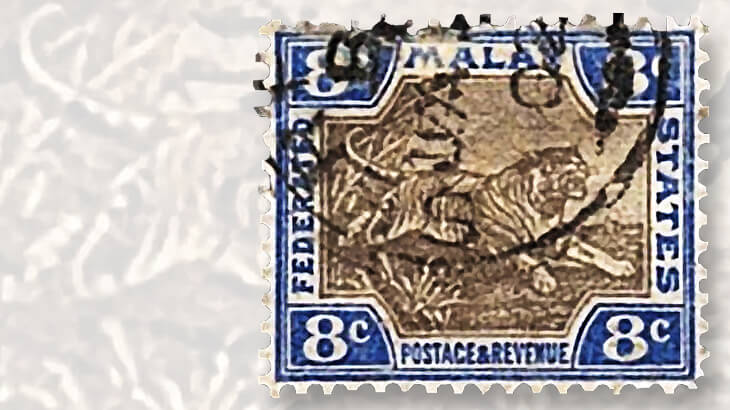 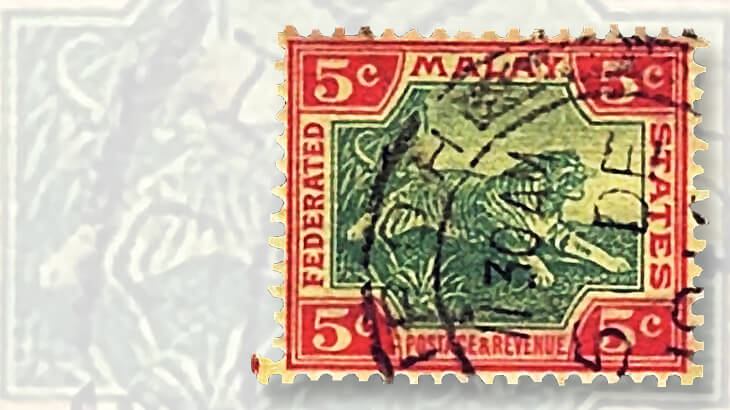 In 1901, the Federated Malay States issued its first stamps with a design of a Malayan tiger. 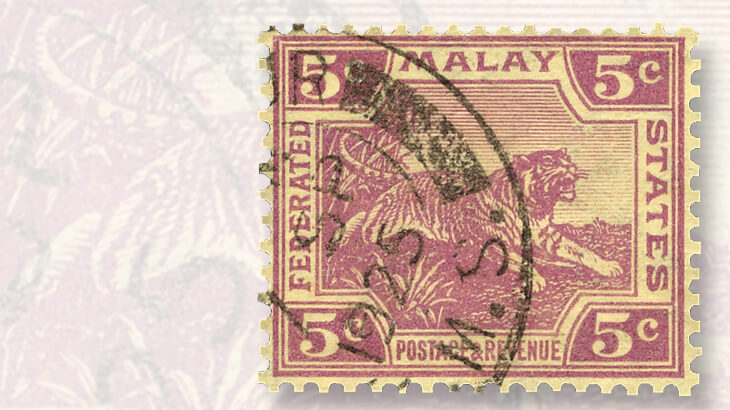 Some of the Malayan Tiger stamps in the first few decades were printed on colored paper, such as this 1922 stamp on yellow paper. 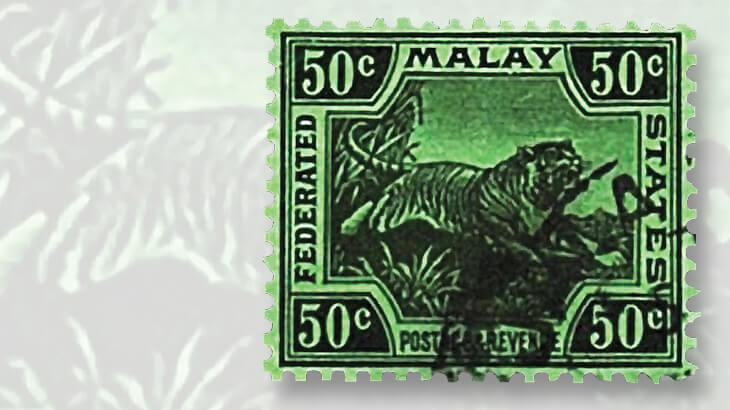 Tiger issues of 1922-32 display a wide range of colors and paper types. This 1931 stamp is printed in black on blue-green chalky paper.
Previous
Next

The stamps and postal history of Malaysia and its precursors, Straits Settlements and the Federated Malay States, can be quite confusing.

If you have a basic interest in and curiosity about Malaysia stamps and postal history (or those of any other country), slow down. Hang on to the attraction and don’t give up quickly because it seems too complicated.

Instead of trying to gather everything at one time, pick a single stamp or a set of stamps and concentrate on that, one step at a time.

In 1901, the Federated Malay States brought out a set of definitive (regular-issue) stamps (Malaya Scott 18-25) that features a rather attractive but slightly scary tiger. The good news is that this tiger won’t bite when you grab it with your stamp tongs.

Malaysia’s national animal, the Malayan tiger, is a subspecies that lives in the southern and central Malay Peninsula. It is a critically endangered species, with only several hundred adults surviving at this time.

The stamps in the 1901 set are in different colors for the various denominations, but all have the same tiger image as the vignette in the center of the design, surrounded with a frame reading “Federated/Malay/States” with “Postage & Revenue” at the bottom of the frame.

Stamps with the Tiger design were issued up to 1934. During those 33 years, not only were there a good number of stamps but also varieties of them. That sounds complex, but again: Pick out something fun to focus on and learn as you go.

As you collect Malaya’s Tiger stamps, you’ll find that the Scott Standard Postage Stamp Catalogue has simplified listings of the more common varieties, and the Scott Classic Specialized Catalogue of Stamps and Covers 1840-1940 will provide more detailed listings of varieties, as the catalog’s name implies.

Only seven major varieties were printed on colored paper, so let’s begin with those. The 5¢ scarlet and green on yellow paper from the 1901 set (Scott 21) is very attractive, easy to find, and inexpensive.

Another 5¢ denomination was issued in 1922; it is violet on yellow paper (Scott 58), giving the tiger a slightly brownish violet color because of the yellow background. If you have ever painted with watercolors, you might have brushed some purple paint over yellow and noticed that the result was neither purple nor yellow, having turned brown.

Now you have gotten your feet wet and are ready to find the remaining tigers on colored paper, and start to acquire some of the other Tiger stamps.

These stamps were printed on paper with a watermark identified in the Scott Standard catalog as Watermark 2, Crown and CA, the watermark of the British Colonial and Crown Agents. The CA stands for Crown Agents, an administrative branch of the British Empire dating to the early 19th century that, among other duties, provided and promoted stamps for British Commonwealth territories.

Some watermarks are easy to spot. Two dry methods are to turn the stamp face down on a piece of black paper and see if the watermark shows, or hold the stamp up to a bright light, with its back facing you. If that doesn’t work, a standard wet method is to use a watermark tray and watermark fluid, which are sold by many stamp dealers. Check out the ads in Linn’s.

You can get more depth in your collection of 1901 Tiger stamps as you gather more and carefully examine the colors. You can expect to see differences in the colors, because there are definite variations, and it is worth your time to seek them.

An example is the 8¢ ultramarine and gray stamp (Scott 22a). The same stamp in its original colors of ultramarine and black (22) has considerably more catalog value: more than double that of the variety.

Keep looking! Listings for the numerous varieties that occur within these Malaya Tiger stamps can be found in the Scott Classic Specialized catalog.

Between 1904 and 1910, 11 more Tiger stamps were issued (Scott 26-37), and these, too, are bicolors that have color variations definitely worth investigating. The big difference between the 1901 Tigers and the 1904-10 Tigers is that the watermarks are different. The 1904-10 stamps show Scott Watermark 3, Multiple Crown and CA. Interestingly, the watermarks are mostly found sideways.

The 1904-10 stamps have yet another intriguing aspect: Some are printed on ordinary paper and others on chalky paper. Chalk-surfaced paper prevents someone from attempting to remove the cancel on a used stamp because soaking the stamp will lift the printed design off.

It isn’t always easy to distinguish chalky paper from ordinary paper. Touching chalky paper with something silver — a silver coin or a piece of wire — will leave a telltale mark that can’t be removed, and thus has damaged your stamp.

There are better ways to identify chalky paper. In this case, start with one of the 1901 Tigers, all of which are printed on ordinary paper. These stamps will be slightly thinner than the later issues on chalky paper.

Hold the stamp in tongs and tap or flick one of the corners, to make a snapping noise. If you hear a loud snap on one stamp and a dull snap on another, the louder snap is chalky paper and the dull snap is ordinary paper. You also will notice that the chalky paper feels thicker.

Eleven more Tiger stamps were issued between 1906 and 1922 (Scott 38-48). This time the stamps were printed on ordinary paper, and all are of a single color. There are only two varieties that have a fun element, and add only slightly more value.

From 1922-34, 31 new Tiger stamps (Scott 49-79) were issued, along with a few minor varieties. These Tiger stamps were printed on paper with Scott Watermark 4, Multiple Crown & Script CA.

Sorting your tigers will require some careful effort, but the Federated Malay States Tiger stamps offer diversity along with opportunities to learn about watermarks, paper, and colors.

For more information about these stamps, visit the Malaya Study Group website.